I was tagged by Joanna Chan in her Blog It Forward post.  I think the Blog It Forward community challenge kicked off by xMoshe Naveh (Old Acct) is a wonderful initiative – it brings humanity and soul to the SCN community, proving that behind the SCN discussions, blogs and comments there are real people with real lives.

Although I was born in Malaysia (with Chinese heritage), my family immigrated to Australia when I was two years old and I actually grew up in the Adelaide hills of South Australia.  Here’s a fun fact – Moy is an Irish name.  But clearly I’m not Irish.  It’s by coincidence that the translation of my Chinese family name ended up with the spelling ‘Moy’.  When I was young my parents used to get letters from an Irish ‘Moy’ clan trying to organize a gathering of all the ‘Moy’s in Australia … I imagined the look on their faces had we turned up.  To confuse things further, I ended up marrying my partner who is of Scottish descent.

In school my sporting achievements included top scoring with 4 (not out) in a cricket team that was bowled out for 12 (for those of you who don’t follow cricket – that is not an achievement to be proud of), and accidentally running into some goal posts in a relay race watched by everyone in school.  I was somewhat more successful tinkering with my Commodore64 in the evenings at home.  I majored in Computer Science and Commerce with a degree in Mathematical Sciences at the University of Adelaide – in those days (late 1980s) there was no such thing as a business systems degree, and the Computer Science part of the course was very theoretical.  I recall a mathematics professor spending an entire lecture with whiteboard after whiteboard of Calculus to prove that a 5 line program was ‘logically correct’ – I’ve since wondered how much effort he would need to prove correctness of the entire SAP code base.  At least the course did teach me structured programming with Pascal, trying to undo the poor spaghetti code practices I’d earlier taught myself on my Commodore 64 (and which anyone working on my team in an Innojam will know I revert back to).   Interestingly, I started my career as an Accountant in the early 1990s.  But after a few years decided that I wanted to build things rather than count them, so I moved to Melbourne to join a large Systems Integrator starting out as an ADABAS/Natural developer.

I landed in my first SAP project in the mid 1990s working on a SAP HR/Payroll project (having just completed FICO Academy – defies logic, doesn’t it) and pretty much fell into more and more HR/Payroll projects for years thereafter.  I joined SAP in 1997 and stayed for 3 years.  After finding myself spending more time debugging code rather than configuring, I eventually decided to reinvent myself as a developer and in particular focusing on web development with Internet Transaction Server implementing Employee Self Service. They were truly the golden years – I still look fondly on that time and think that SAP was the best employer I ever had.  Of course times were not as challenging for SAP back then.  After working for years in the last decade as a independent consultant (in both Ariba and SAP) as well as for a local SAP partner, I eventually decided to work for the customer.  Now I work as a SAP user interface and mobility architect.

When I’m not working or tinkering with technology at home, I’m spending time with my wife and (now) 5 year old son.  Here’s a photo of my son and I in front of our home in Melbourne a couple of years ago … 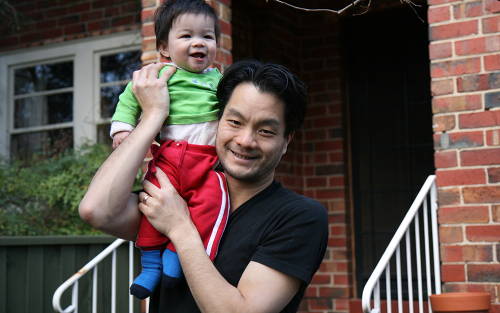 When I look at my career in IT, I’ve been truly blessed and lucky.  I read about people trying to break into the SAP industry these days, and there is so much more competition.  I sometimes wonder whether my son will have any inclination towards a career in IT when he grows up, and if he does whether he will have the same opportunities.

If you had to change career tomorrow, what would you pick?

That’s easy, I wouldn’t change.  In truth in my early teenage years I aspired to be a marine biologist … but then I watched Jaws the movie.  I know I found my calling when my parents purchased a Commodore64, and I never looked back.  I think back to how I spent countless evenings trying to code something, be it a game or some graphics (my favourite C64 color was Cyan).  And nobody paid me a cent back then to do that.  I remember the dot com boom in the late 1990s when people dropped their chosen careers to pursue a lucrative opportunity in IT.  But many of these people actually hated IT. It saddened me when someone would say ‘I hate programming, I just do it for the money’.  And when the dot com bust arrived, these same people exited the industry.  I’m really lucky that I love the world of IT, and user interface development in particular.  In fact, for those cricket lovers out there, my actual life goal when I was much younger was to be the dude who programmed the run rate graph shown on TV during one day matches, something like this … 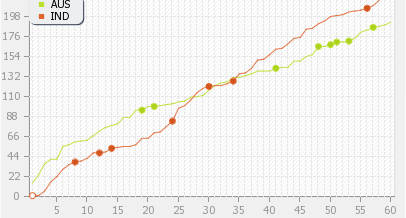 After 20 years in the industry, I’ve come to a fundamental belief that it’s all about people.  But finding talented people is only one facet.  It’s also about attitude, and belief, and how we treat and respect people.  These days I am much more a believer in a small team of techno-ninjas achieving great things quickly.

So the key elements for a successful project? … it’s about sourcing the right people.  If you truly believe that great people can make a difference, then do everything you can to find them and involve them in your project and everything else will sort itself out.

I’d like to Blog It Forward to these guys:

Here are two great individuals who I have worked with in the past.  They are both big South Africans with big hearts, and I sat next to them for a year on a project a few years ago.  Even though I am a SAP Mentor, the title doesn’t always sit well with me because I know many very capable and talented people who aren’t so visible to the SCN community.  So I thought I would like to Blog it Forward to these two people.  Here they are …

You can also choose to pick up questions from the original Blog it Forward challenge.

I’m looking forward to reading more Blog It Forward posts from the community!

What a nice picture of you and your son.  He is so cute.

In truth in my early teenage years I aspired to be a marine biologist ... but then I watched Jaws the movie.

This is a great quote.

You are right, it is all about people and I am so glad you are reaching out to those who are not so visible to the SCN Community.

I got my start in Accounting as well.

Funny, it took me forever to find a photo of my son and I taken in Melbourne.  Normally I'm the one behind the camera and most photos are taken when we travel!

Hi John - Really interesting post. I have family in Adelaide, my cousins are all Crows fans!

Wow, I'm a Crows supporter too!  Although I don't go to see the games these days now that I have a young child.  I had this suspicion that I jinx the games because they always seemed to lose the ones which I went to see.

Great post John. Very though on BIF to folks who deserve to be known by community members. Like the graph, especially considering IND run rate looking pretty good. Didn't happen much then!

Thanks for the nice blog - I *thought* it sounded like an Irish name 🙂 .

And thanks for calling out to new blogitforward peeps - the more the merrier (and anyone who warrants your high praise is worth knowing).

Thank you John for your kind words and for joining the challenge. Your blog signifies exactly what BIF is all about.

You are really fortunate to work in something you are passionate about. your son is extra cute:).

I was wondering how does a techno-ninjas looks like. Does it throw bytes instead of stars:).

Thanks for sharing John, and I couldn't agree more about it being all about good people, that is true for ensuring successful projects and for SCN!

Thanks for sharing your story, John!

Especially the "it's all about the people" bit resonated with me, having seen this firsthand: in 2002-2003 we did a Payroll implementation (60k users) with a reasonably large team. In 2004 we kinda had to do it again for 120k users in just 9 months with a smaller team (politics...). The project manager of the first implementation didn't dare to do it, despite the (mix of new and old) project members telling him that we thought it could be done. Another project manager did see the potential of the new team, and needless to say, we managed it 'easily'. Having the right team (and skill set) is sooo important!

You baby is very cute and smart! Keep up the good work! I like the way of presentation!