I know Thorsten to be a fine fellow, an incredibly supportive ally, enthusiastic and involved, and always miraculously able to pull through at just the right moment when I’m having a bad day or a root canal or something like that.  He also said the finest thing about me: “As far as I can tell, she has a big heart, a powerful brain, and a taste for good whisk(e)y, and what more can you ask for in a person?” All this, and I’ve never met this fine fellow. I only know him via Twitter.

This is the way it is with so many SAP Mentors.  If I encounter a kind word from a colleague, a retweet of a human rights concern that is important to me or my family, support for personal initiatives, or just a simple acknowledgement of some random moment of my day, more often than not I’ll look up the colleague and find that he or she is, indeed, an SAP Mentor.  This is the essence of the soul of SAP – we go above and beyond toil, labor, effort, and other things commonly known as “work” because we’re part of a community. I’m honored to be included by such an outstanding group.

My name is Moya Watson and today is my daughter Lucy’s eighth birthday. I myself was born decades ago in California before there were computers or cell phones or Katy Perry — which pretty much makes me a California girl.

My first computer was a Macintosh SE without a hard drive — the box shape you sometimes see used as a doorstop these days. I’ve been working in the software industry since before some of my colleagues were born. My first job was testing German DOS-based software at a San Francisco Bay Area establishment called Power Up Software.  Back in the 1990’s I hand-coded my very first web site and you can find it to this day right here:  http://monkeybrains.net/~moya/

When everything old is new again

It’s amazing to me to contrast this with my daughter, who uses all the very latest iPhones, iPods, tablets, Androids, and even a few Windows devices, largely because of OTIVO — my wife Leanne Waldal’s QA and usability company.  Because OTIVO needs them for testing, we tend to get all the latest devices delivered straight to our house.  Last week’s new thing is old for testing, so our girl gets it.  I like to think in more ways than one.

I often wonder about what our shiny new devices of today will look like decades from now, amongst other relics of the past. 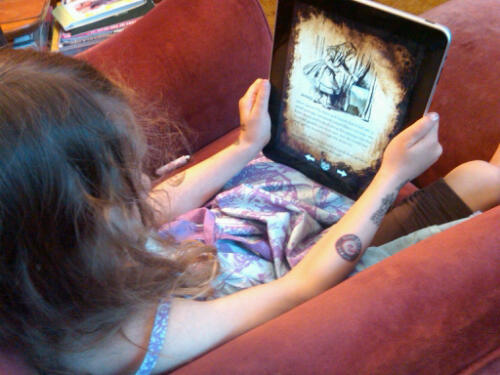 Sometimes I think I must be known for random rejoinders and seeming strangely off- topic but for me SAP brings it all together, because if we’re going to help the world run better nothing in the world is out of bounds, and if it seems that way now it’s just because we haven’t arrived there yet.  My personal favorite blog post I ever wrote on SCN was Michael Wesch and Web 2.0: “Rethink Love” because, among other things, it talks about astronauts and it introduced me to Marilyn Pratt and I wrote it on my daughter’s birthday five years ago.  On a day like today because of the magic and gift of my girl I get to rethink, and I’m new again.

I’m going to be frank and emote what first comes into my head, answering these now without looking at anyone else’s answers first to try to remain authentic.  I’ll probably wish I’d gone back and changed something later.

1.What is the best you can teach others, or share with others?

I ask myself this every day, and it’s a really great question for today.  My immediate reaction is that I don’t know any best way.  In my hyper-valuation of diversity, it’s most important to me that everybody is the best they themselves can be, and to me this means I don’t have the one best of anything to teach.  It’s just me.  Then I need to have my second reaction, because if I can’t respect my own “teachings,” I can’t pass on a good model to my girl.

So I guess I’ll boil it down to this: Be kind.

2.Suppose you won $ 500,000,000 in the lottery. Let’s allow for two years of reckless spending and fulfilling yourself some dreams – after that initial phase is over, what do you want to be and do?

I’d try to take care of the future of the planet the best way I know: To help the next generations.  I would make sure my daughter is as well provided for as possible, with material concerns like housing taken care of, so she can focus on an extraordinary future.  I would hope she will want to go to college, and I’d make sure college is funded so she doesn’t have to be burdened with debt. This is an incredibly non-hypothetical situation for me — take a look for yourselves what it would cost to save for and go to college today: http://www.archimedes.com/vanguard/csp.phtml.  There’s $300,000 off the top easy.  Double that if she wants to go to Stanford.  Double that again for grad school. How many of us are millionaires? Raise your hands!  This is what it takes to put your kid through college.

3.Marilyn’s question: Describe an instance when empathy in a project, development, collaboration, work experience, or community interaction turned a situation around (or should have).

Another greate question.  So many things come to mind, including many “should have’s”!

I’ll describe the very first such interaction I can remember where I was actually able to turn it around.

Back in 1988 I was living in Germany and had a thing for getting my ears pierced and hair cut by friends.  It didn’t usually occur to me that people thought I looked unusual, so when people stared I was surprised.  Once, while riding on a bus with dozens of older Germans, I found a woman staring at me with what looked like hostility.  This scared me and I was tempted to glare back – and sometimes, on bad days, this is exactly what happens.  Perceived mean begets more mean; the cycle perpetuates.

Except that this once, I was compelled to do the opposite.  I focused my gaze and directed a sincere and welcoming smile to her.  The results were instant — her face softened and broke into a huge grin.

We became friends, and we’re friends to this day.

I guess this hearkens back to question #1 above:

I might even have been wrong perceiving her initial staring as hostile.

Be open to differences.

Be open to being wrong.

Take a sad song — and make it better.

Make the world a better place.

I would like to Blog It Forward to Karin Tillotson, Greg Chase, and Jim Spath:

For you, my friends, I respectfully submit the following questions:

Please follow the Blog It Forward Chain in order to be updated when Karin or Greg or any other members of the community blog it forward. Also, please join the fun (see the original blog on how to do it)!

And have a happy birthday!