Folks, I’ve been honored by Marilyn Pratt blogging it forward to me and also been given an opportunity to explore the subject of Empathy and to answer some personal questions. Let’s start with the easy part.

My name is Jelena Perfiljeva and it was designed specifically to ward off the annoying telemarketers (“Miss… err… Bur-ba-jeeva? – Nope! [click] ”). For the restaurant reservations I usually go by Smith or Jones, although it’s getting increasingly difficult to keep track of my multiple personalities.

Currently I reside in the US and work as an SAP Technical Analyst for one of the few companies that still do manufacturing here. My SAP career started about 7 years ago purely by accident. One person left the internal SAP team and I was thrown into the mix right in the middle of our first SAP roll-out. I was very fortunate to have excellent mentors help me learn ABAP and SAP ins and outs and can only hope to be a match to their generosity in sharing the wealth of knowledge. 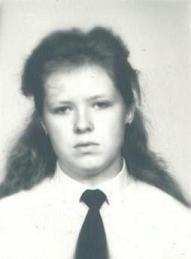 Growing up in a totalitarian and largely male-dominated society (despite the claims of otherwise), little girls were allowed to dream about only two professions: a teacher or a doctor. Faced with such choice, I had to go with the doctor because somehow dealing with bloody wounds and corpses seemed more appealing than dealing with school-age kids and their parents.

I went with the “doctor legend” for most of the school. One thing I really liked about the doctors though was their pure, clean white coats. So when years later my school friend’s older sister got a job at a Computing Center (mind you, this were the pre-dawn times for PC) and showed up in a crisp white lab coat, I instantly knew I needed to get in on this. I was not a doctor anymore – I was a “computer person”.

(Exhibit A is a picture from my first student ID – smiling on camera was not appropriate for the “future builders of communism”.)

It’s my home! Preferably by TV or a computer with a cup of Darjeeling tea.

Describe an instance when empathy in a project, development, collaboration, work experience, or community interaction turned a situation around (or should have).

Aaah, what an excellent question. Let me tell you – women know the whole lot about empathy. Just to give you one real life example – some freeways in the US have such poorly designed entrance ramps that the drivers merging into a freeway simply don’t have enough space to accelerate and have to be at mercy of other drivers to let them in. So imagine I’m behind the wheel on such an entrance ramp in a rush hour and another driver is just not willing to let me merge. If my passenger was another woman, our dialogue would be something like that:

Another woman: – Oh my gosh, what a total jerk!

End of subject, we drive happily into the sunset. Now imagine my husband is a passenger:

Me: – But can’t he see that the merge lane is ending?

Me: – How can you defend him? Are you with me or with him?

And this is just one of examples that shows how sometimes just a bit of empathy goes a long way.

But back to Marilyn’s question. Come to think of it, the whole SCN is actually built on empathy. We show our empathy every day by sharing our knowledge, our thoughts and ideas, by answering forum questions from people we don’t know. I hope we can get our Coffee Corner back soon – I can really relate to the personal stories we used to share there.

As we saw, our community is also perfectly capable to empathize when things don’t go well with the SCN migration (Oliver Kohl’s blog is just one such example). Most of the SCN users are probably IT professionals, so I think we can easily relate to the SCN team’s struggles.

But since the migration to New SCN occurred, I can’t shake off the feeling that somehow The People in Charge of SCN (TPCSCN) really have little empathy towards the “file and rank” SCN users.

For example, here’s my brief version of the virtual dialogue that occurred shortly after migration between TPCSCN and users:

TPCSCN: We have better, faster SCN!

TPCSCN: But don’t you see the new shiny buttons? And almost everything almost sometimes works!

TPCSCN: You are being negative! You need to prove your words by doing extensive analysis and presenting it to us in a way we can understand.

Users: Here and here is a poll that shows that majority doesn’t like the new site and forums. Here is a pie chart based on our research in Twitter.

TPCSCN: Ahem… ahem… Good job, you, that’s what we need. Now carry on and get used to the new web site.

Is it just me or did it look pretty much like infamous George Bush’s Mission Accomplished banner?

OK, and here is my “empathized” version of what could’ve occurred:

TPCSCN: Look, we wanted to make SCN a better web site, but the project kind of went FUBAR. We’re working on this though, so hang on there, OK?

… and we drive happily into the sunset.

Empathy is not always a two-way street. It’s not the “you scratch mine and I scratch yours” kind of thing. One does not have to empathize, just as one doesn’t have to facilitate others merging onto the freeway. We can only choose to empathize ourselves and we can only hope that we communicate in a way that might prompt empathy in others. I hope we can all together make New SCN our new home that we can love even more than the old one.

In conclusion, I’d like to blog it forward to Otto Gold and Thomas Zloch and ask them to kindly answer one or more of the same questions above plus one “surprise” question they would ask themselves.

Update 9/20/13 – I’d like to also blog it forward to Steffi Warnecke with the same questions. Go Steffi!