And I was Tagged ! It seems that there is no escaping the Blog It Forward phenomena and I was honored to be tagged by Frank Koehntopp who’e been one of my inspirations when it comes to DSLR photography. That’s me and and if the image above gives you the impression that I am generally always very busy you should see my mom 🙂 . I was born, brought up and schooled in the small, sleepy Steel Township of Durgapur. My dad worked in a bank and my mom was a teacher and they always encouraged me to take independent decisions right from a very small age. As an effect I’ve been very comfortable taking decisions on my own and in the end live with the consequences. I think this is one of the greatest gifts that they gave me. 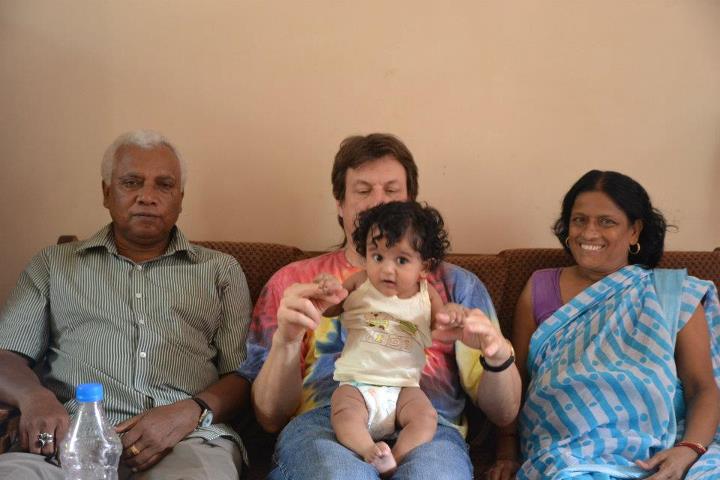 (My parents with Jim, at our house in Durgapur)

Though I have a Mechanical Engineering degree, I’ve always been fascinated with computers (First brush was when I was in my 9th standard and I owned my first ever PC, my first laptop in 2006) and hence I quit my first job with a manufacturing company and jumped into software. Before I knew it, I was working for SAP and then IBM and now, after 9 years I think it’s been a hell of a ride. I’ve joined SCN (which literally changed my life), co-authored a SAP Press book on SAP MII and became a SAP Mentor, things that I’d never expected I will do/achieve and have gained knowledge, love and very good friends all over the world. 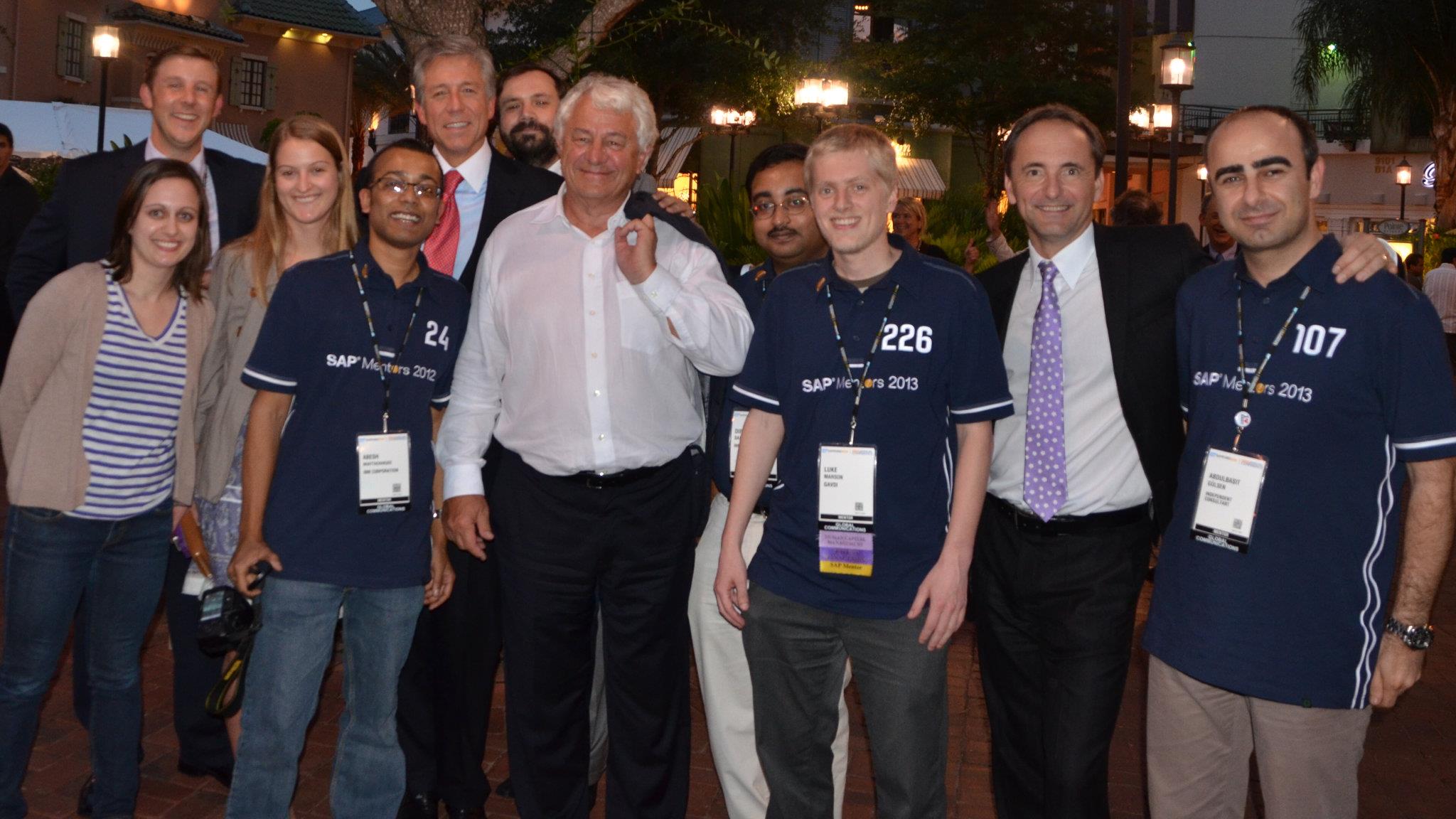 Stuff that you might not know about me (Frank’s questions).

I have a lot of hobbies that I actively pursue. I am a gadget freak and an Android fanboy, my latest acquisitions being the Nexus 7 tablet. I am also a gamer and own a Gaming laptop, a PS3, a PS2, a PSP and have already pre-ordered a OUYA.

I am into literary events for e.g. Quizzing, What’s the Good Word, Dumb Charades etc. and have participated and won events since school (I, obviously, had very good teammates)

I am a movie buff, not as hardcore as my good friend Martin Gillet.

I also love listening to music, mostly rock and metal from the 80’s and 90’s but listen to anything that appeals to my ears even if I do not know the language. Love Pink Floyd, have watched Roger Waters live in concert and my still unfulfilled dream is to watch David Gilmour live which I am not sure is going to ever happen 🙁 . 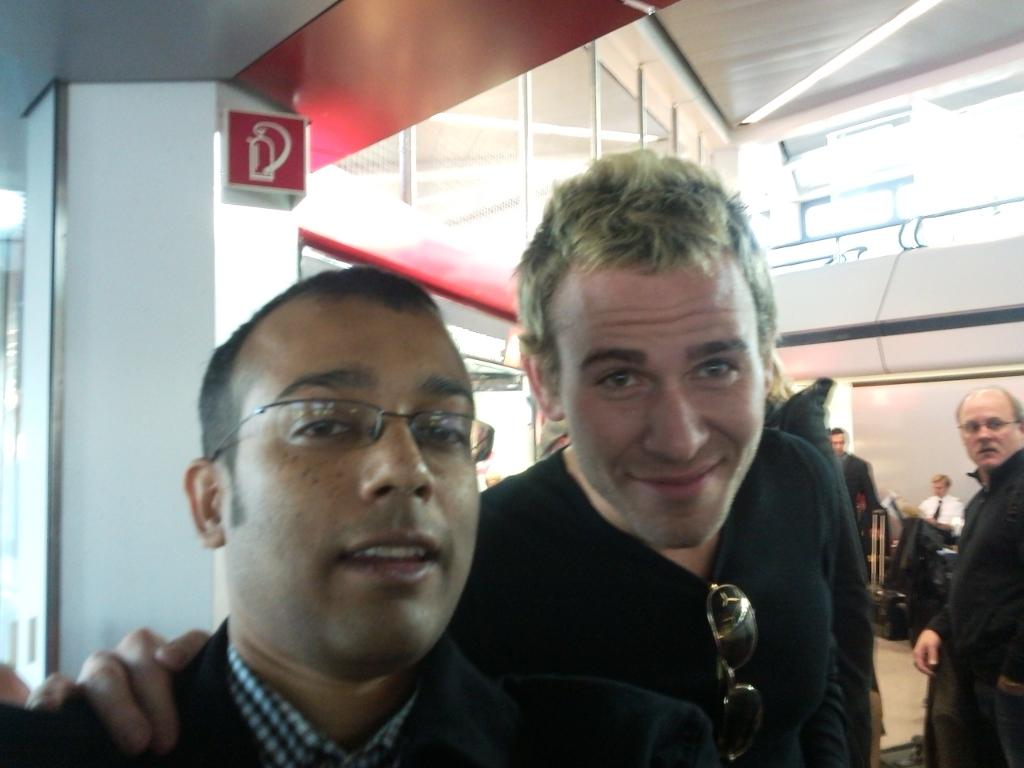 (With Jason Wade of Lifehouse at the Berlin Airport)

I have a lovely wife and a one and a half year old son, whom I wanted to name “Roger Keith Syd Barrett Bhattacharjee” but was vetoed out by almost everybody… sigh 🙁 . We finally named him Ahir. (The longest time that I gave up gaming was after my son was born, for almost a year and a half. It’s been a month that I have dusted off my Laptop and started gaming a little bit again, though all of my consoles are still packed.) 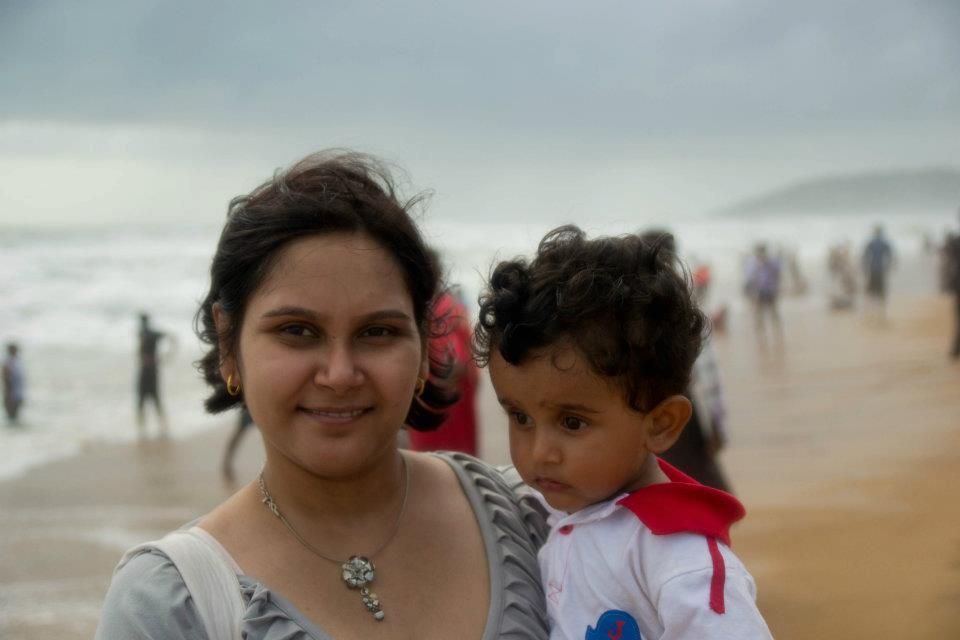 Now if these were not embarrassing enough here are a few more :

I love the gadgets I own and am very possessive about them, sometimes maybe more than human beings. I lost my cool and blasted my wife Haimanti (then fiance) when she dropped one edge of my laptop from about an inch off the ground. I was meeting her for the first time.

I have trained to play the Tabla for 6 years when I was a kid and the drums. I can sing (I think) and have been a part of the SAP band called SAPTAK. I was supposedly a western vocalist and the only song number that I sang was RHCP‘s Californication for the band sound check.

I have acted in multiple plays since school and have also participated in the amateur theater scene in Bangalore where we staged Woody Allen‘s God. I played Trichinosis if you wanted to know. I apologize to everyone who had to endure my acting skills over these years but if they knew I was acting and still attended the plays, they deserved it 😉 . 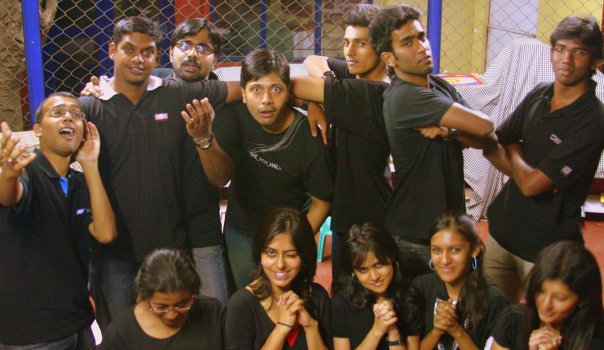 (The cast and crew of the Woody Allen play – God. Me – extreme left)

Two Very Random Facts about myself

I would tag it to Dipankar Saha, Somnath Manna, Craig Cmehil, Martin Gillet and Graham Robinson. They are some of the few who have inspired and mentored me over the years and I couldn’t thank them enough for everything they did for me.

Me, with the coolest CEO that I have ever met. 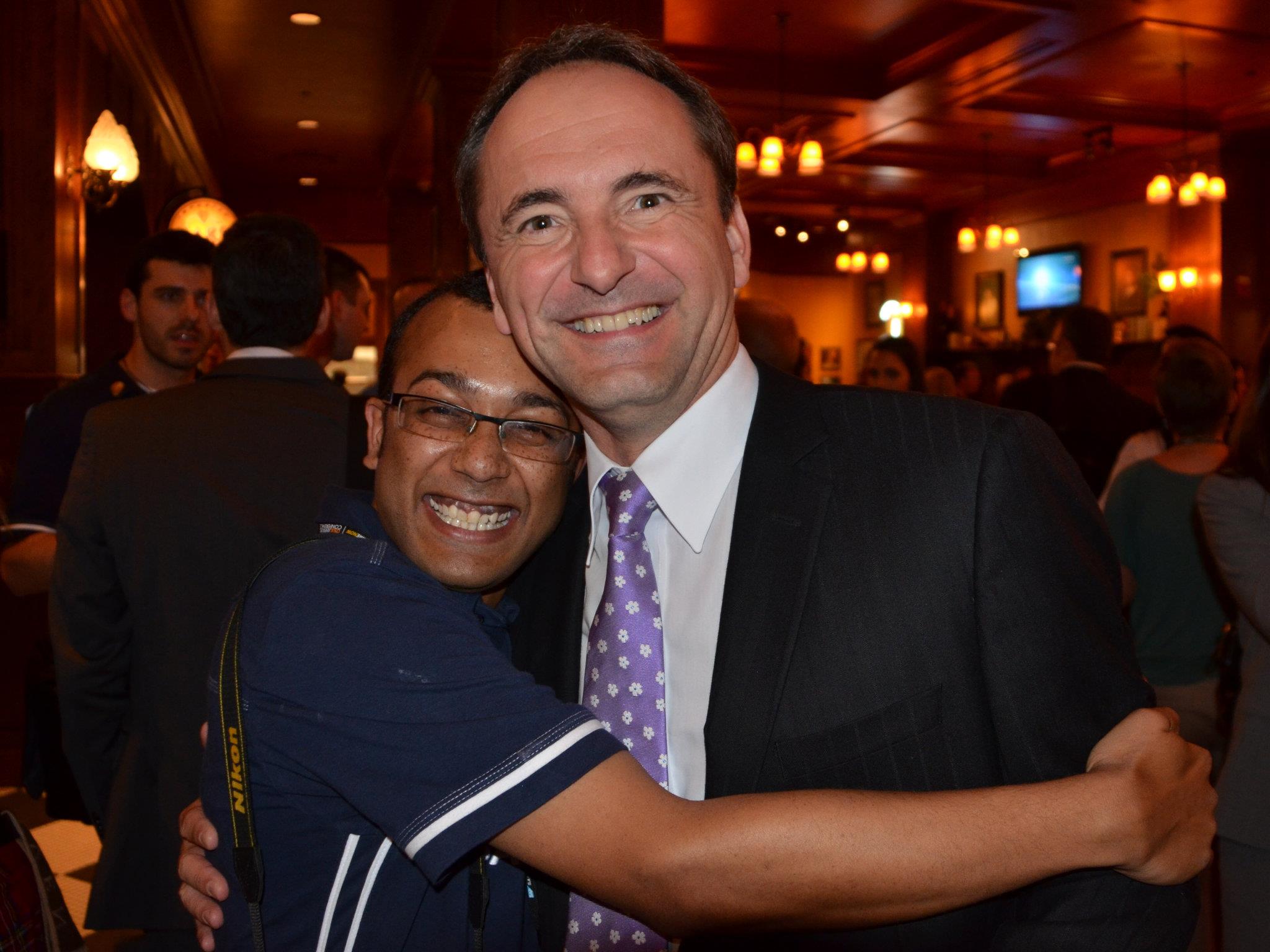 Thanks for taking up the challenge so quickly.

Well, I had nothing better to do today 😀

I really enjoyed the pictures and the stories about you and your family.

Such an amazing story of how SCN changed your life.  Great pictures too of all the things I missed at SAPPHIRE 🙂

Ahir is for sure easier to spell that Roger...Syd Barrett too

Love the hug picture:) Have you ever played multi-player Doom2 ?

Oh, the hours I spent on Age Of Empires. Those were the days.

Great blog, and very nice to learn more about you. Don't agree with Frank though: all pictures rock!

Looks like some serious suithugging going on, that always deserves a special mention 🙂 !

Great post and pics! Thank you for sharing so much about your varied interests and experience in music.  I hope you make it back to Texas soon so we can share some more music fun.

Unfortunately I don't think I am gonna be stateside anytime soon 🙁

Hi Abesh - Great to learn more about you and what a wonderful selection of photos! You are definitely on my "need to meet" list and I hope we get together in UK or somewhere else soon.

I can tell you the feeling is mutual 🙂 You are pretty high on my need-to-meet list too 🙂 Definitely someday, somewhere...

Great job on your BIF blog Abesh!  I learned so much about you.  Love the picture with Jim Snabe!  And so funny that you got a shot with Jason Wade at the Berlin airport.  That year we had Lifehouse in Berlin and then Las Vegas the following week -- crazy year.

Well I just got tagged by Tim Guest, so I have my work cut out for me!

That pic with Jason was right the next day after Berlin TechEd. Was lucky to be there 🙂 Loved the Lifehouse concert. The band members were sports and even gave me an autographed guitar plectrum that I treasure 🙂

A nice blog entry there. Learnt a few more things about you and a great selection of pictures. Enjoyed reading it thoroughly.

Hi Abesh, what a great blog! Learned so much about you.  Really enjoyed reading.

OH MY those are THE CUTEST pictures EVER!  I totally want to be there next time you give Jim a hug.

Who's the first Jim? and how adorable are you in that picture?

And SYD BARRETT would have been a wonderful name! We almost gave Lucy the middle name of "Spike." ...

Thank you for sharing all of this great stuff!

One day we should all organize a virtual BIF group hug:)

There needs to be a caption contest for the last photo!

Loved your blog Abesh! Its so energetic and warm - just like you! And I learned new facets of you 🙂   I should have known you were into acting.

Quizzing is that like the game shows? Yesterday we watched the game show 1 vs. 100 and saw a contestant take 1 million. Its the first time in Israel and apparently the 2nd time in the world only on this show. Would you ever go on a game show?

BTW Ahir grew so much! And he's adorable.

Your post rocks. Gali Kling Schneider put it so well when she wrote that it is so energetic and warm. I'm not surprised that you have an artistic vein, and reading your blog makes me look forward to meeting you in person even more. 🙂 Great photos, stories and person!

It is said that a person is defined by the company he keeps. As I said in the post, I have very good friends all over the world, that's why, maybe I am who I am 🙂

Can't wait to meet you too 🙂

Nice one Abesh! Now with all these info about you singing and acting I'm really looking forward to your #SCNOtties submission this year 😛

Let me see what I can come up with 😉

Awesome BIF post, Abesh! So, question for you... do you still play drums???

Learnt to play the drums in college and unfortunately gave it up after I passed out. Would love to start again though, but you know a consultant's life right ? Never at one place 😉

As always...you rock my friend! Always proud of being your brother from different country 🙂 Many greetings to your beautiful family! And always looking forward to meet them in real life 😉

And getting the family together ? That sounds like an awesome plan 🙂

Awesome post, Abesh... You are inspiring me a lot. Last picture with Snabe was fantastic. Good..

Thank you for the kind comments Vasanth 🙂

good to hear about it 🙂

Thanks so much man !!

Very nice blog! I like the way that you have presented,

Lovely blog and I liked the way that you have presented.

Keep up the good work! I appreciate 🙂