A key date variable allows you to specify a date for time-dependent data.

We had a time dependent master data for Geography.

We created a Key Date variable “ZKEYDT(Enter Key Date)” which was a ready for input variable created on 0calday.

When the report was executed the prompt for Key Date was not coming in WEBi.

If we have a Key Date variable created at the BEx query, we have to mark “YES” for the KEYDATE_ENABLE parameter at the universe level (as seen below) 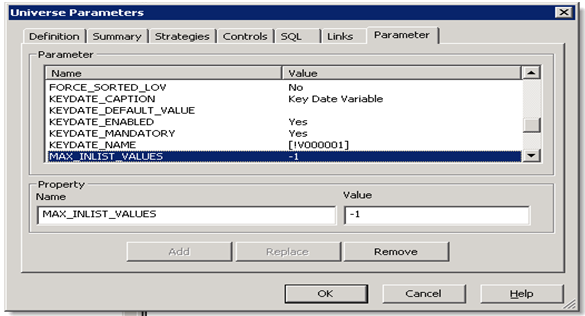 Also if the Key date variable is created on 0calday you need to remove the char 0calday from rows/column of BEx query.

We had one more requirement with respect to the key date variable. I would like to share the same too.

We had a BEx query on 0Employee master data which had a key date variable prompt.

For Example: For Month End Data

In WEBi user did not wanted to run the report 12 times.

We create the Universe on the BEx query and used the same universe 12 times in the WEBi query designer.

We named query as Jan,Feb,mar……,Nov,Dec.

Using the merged dimension property at the WEBi level we merged all the 12 months queries to show the data. When the User ran the report , he gets the prompts for each month where he can input the start or end date of the month and run the report.

User got the data by runnig the report just once.

I hope the blog helps you all.

Please could you confirm the product version (XI3.1 / BI4.0), the client tool (presumably Universe Designer), and the type of universe (MDX OLAP .UNV)?

I am very new to SAP BI/BO

thank you so much for the information..!!
I finally got some idea on KeyDate. 🙂
but a small doubt ..
where can we get the Key date name as you mentioned ( A technical name )..???

That should come automatically when you create universe.

Thanks in advance Arijit