One custom authorization object for all

I hope you didn’t believe it.  certainly, that is not possible, but the number of custom authorization objects can be reduced significantly if you could utilize this authorization object.  I wrote this document few years ago so there may be new technology that might even be better.

One custom authorization object for all

Most of custom codes create, modify, view, or execute.  Also, most likely, it is written with different program or code name.  SAP ABAP stack updates system variable such as SY-CRPOG every time the code is executed.  It is updated with the program name that is being executed.  The concept of this authorization object is checking for the program that’s being executed and what actions users are allowed.  It is a very simple concept.

Following is the building of the authorization object. 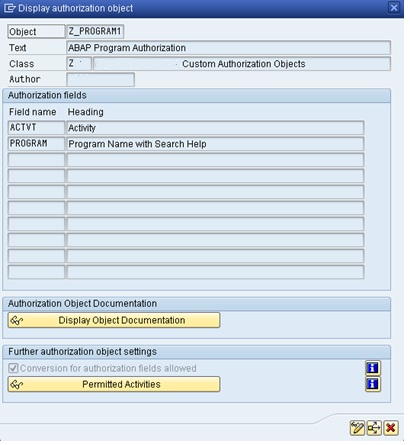 The screen shot shows the authorization object, Z_PROGRAM1 in custom class Zxxx.  These values can be anything that fits your instance’s naming convention.  However, naming of authorization field should not be changed.  There are only 2 authorization fields, ACTVT & PROGRAM.  The value of ACTVT can be standard, 01-create, 02-change, 03-display, 16-execute, & etc.  The authorization field, PROGRAM, is the program that user will be executing.   The control of this field is very easy if the instance you are working on has good naming convention of programs and codes.  For companies that utilizes name space is even easier since SY-CPROG value starts with name space.  For example, if I had a name space called /paullee/, and I created a program, name would be like /paullee/helloworld01.  The authorization value for PROGRAM would be “/paullee/helloworld01”.  In case I have more than one program and/or codes and the user requires having access to all programs within the name space, the authorization value of PROGRAM would be “/paullee/*”.

Following would be object documentation. 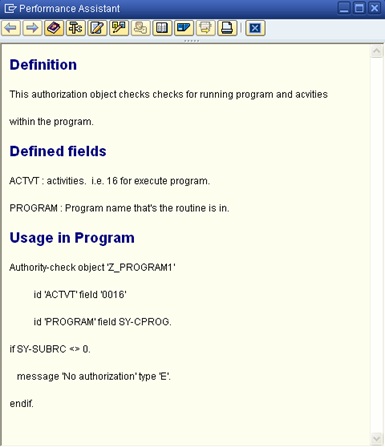 Literally, the usage in program can be cut and paste in to the code without any modification if you are only executing the program.  The authorization field ACTVT is a 10 character field.  However, it works with 4 character number as it is shown.  I also found that it might be different from version to version.

Maybe I have misunderstood your post but I'm not sure I understand what purpose this object fulfils over and above standard mechanisms.

We have a new program that needs to be executed so we assign it to a transaction code.  For the sake of hygiene we also assign an auth group against the program.  Assuming that normal basic practice is adhered to we don't have anyone able to directly execute programs etc.

That covers program execution, now we have the treatment of the data accessed / functionality performed by the program.

In your deliveries example you already say that you incorporate an additional check against a standard auth object V_LIKP_VST.  I agree that if we are doing something covered by standard SAP functionality then we should as default look to using the relevant controlling auth object.   Only when there is new functionality then should we create something new.

Thank you for having interest on my post.  Using the t-code & auth group also works as well for executing a program for single purpose.  However, sometimes a program can have create, change, and display function since underlying logic is similar.  Or one can execute report and send e-mail but the other can display only.  In such case, if you are assigning a t-code, you will have to create multiple t-codes and programs.  And then link them.  Assigning t-codes might be easy only if strict naming convention is used and followed diligently.  This object could give more flexibility.  Program name can start with z or y and then followed by area such as FI or MM so users can access only their area.   Also for t-code, only sa38 could be given at development stage.  As needed, t-code can be assigned later.

This object is not a magic bullet but this is a very good auth object to cover majority of abap programs without creating too many.  I also see that there are good aspect to what you are practicing.  Matter of fact, I use that sometimes as well.  It is just a different approach and one should be able to decide what works for them.

Please feel free to contact me if you have any question.

T-code & auth group to control initiation of transaction is the standard process for any program that should be executed by a "human" user.  As with standard SAP the next step is to use relevant (and preferably standard where possible) auth objects to control at the more granular level.  You don't need multiple tcodes or programs, just use of the standard objects in the proper manner.  If we take your example of V_LIKP_VST, we already have the ability to differentiate between create, change, display through the activity field.  I suppose I just don't see what this additional auth check can give us if proper security coding standards are followed in the first place.

Anyhow, as you said it is a different approach and having good options is never a bad thing!