While some are just complaining that our beloved community (platform) is going downhill and eagerly pointing out the negative trends like blog abuse etc… others are opting for a different route: like Moshe Naveh  with his Blog It Forward Community Challenge. Instead of whining about the things that “were soo much better in the old SCN” he takes a pro-active approach and kicks off this initiative leveraging the core asset of our community: passionate individuals that love sharing and spreading quality content with a positive attitude. It’s a chain mail, but in the most positive way!

As such I feel very honored having been asked by one of my personal heroines and true community champion Marilyn Pratt to join in the fun and pass on the baton torch to do my little part in shining the light on what makes this community unique and special.

So according to the bif rules I should introduce myself before blogging along and while it’s always hard to do I guess it goes back to good manners, so let’s get it over it. My name is Matthias Steiner and in my new role as Cloud Platform Evangelist for Neo I find myself in the privileged position of having a job that allows me doing something I love: interacting with the developer community day-in/day-out.

Being a techie by heart there’s nothing more thrilling to me than pioneering emerging technologie, sharing experiences and discussing best practices with my fellow peers. I’m a passionate blogger and tweep and I love spending my free time with family and friends doing outdoor activities like biking and swimming during the summer and skiing and snowboarding in winter.

Hm, one fact little people know about me is that I’m actually not German, but Austrian. Inline with the common tradition of neighboring countries making fun of each other that usually makes my German colleagues come up with all sorts of ‘lame’ jokes about my origin. Lately, I had to endure lots of jokes about my namesake Matthias Steiner, an olympic gold-medal winner from Austria (who now competes for Germany) and who had a bad accident this summer in London. (Oh, and let me tell you… when it comes to establishing your digital identity on the web it’s quite a challenge to go head-to-head with a true heahyweight! 😉 )

Besides that Austria is known for its beautiful landscape (the Alps) and for many classical music composers such as Mozart, Schubert, Strauss and Haydn. Other famous people from my homecountry include Arnold Schwarzenegger, Siegmund Freud and Ferdinand Porsche, founder of the famous sports car company (in random order!). For more interesting facts about Austria please refer to this list. 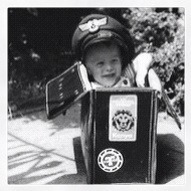 As many others I just wanted to be like my dad – a pilot! He always came back from his flights with little presents, exotic fruits and interesting stories about foreign countries. My mom used to be a flight attendant so airports, airplanes and travelling the world was something I was brought up with and something that shaped my view of the world early on. I flew alone to my grandparents in Austria when I was a mere six years old and during my youth I was able to roam the world at almost no costs at a time when flying wasn’t as affordable as it is these days…

(Un)fortunately when I was done with school airlines didn’t accept applications from people with glasses (damn all that late-night reading under the blanket with flashlights!) and so I turned to the next best thing: computers and programming.

2. What was the most fun project you ever participated in and why?

Well, I already blogged about my most favorite project in my professional life a while ago, so today I’d like to share an experience I made outside of the enterprise world.

In my early twenties I was very active in a non-profit organisation called CISV (Children International Summer Villages), which has been founded just after WWII with the vision to raise a new generation in a peaceful way. In the very first camp that was held, Doris Allen brought together 4 kids and a leader from every country involved in the war and they lived together 24/7 for four weeks. In the sixty years since then hundreds of such ‘villages’ have been organized by volunteers around the world.

I had the privilege to lead a delegation from Germany – two boys and two girls all 11 years old – and attend a village in Michigan City in 1999. It was one of the most mind-changing activities in my life:  spending 4 weeks with people from 12 different countries and seeing little kids (and young adults) that barely speak the same language become close friends, overcoming our differences in upbringing and heritage in every day life situations and living together as one big family has had a lasting effect on my way of thinking about globalization. It’s one of those things you have to experience first-hand in order to fully understand it…

3. Describe an instance when empathy in a project, development, collaboration, work experience, or community interaction turned a situation around (or should have)

Though one! I thought hard about it, yet I couldn’t think of a crisp example. :/

However, during my thinking it dawned to me that there is indeed a close sibling to empathy that does turn around projects, which is cultural awareness (guess it alsorelates to what I wrote in reply to question 2.) In my past role as Software Architect for Custom Development I have been involved in many distributed development projects and as such I have worked with colleagues from all over the world.

Especially in regards to interacting with my esteemed colleagues from India I learned that being able to relate to their traditions and way of thinking is crucial to effectively working with them. Let me explain: in the western world people usually try to separate between private and professional life to some degree, while in India the two are much more connected. In other words, without a personal relationship it will be very unlikely to have a good working relationship. (In the meanwhile I got to the believe that this is a universal truth regardless of origin, especially in high-paced enterprise software projects!)

In daily life this means that when working with people from India it is important to regularly communicate with them and also talk about private things in order to establish a level of trust and the foundation for a successful working relationship. While in Germany regular inquiries for status updates may be regarded as a burden, some sort of micro-management or even be interpreted as doubts about one person’s ability to get the job done, in India it shows that you are interested in the work of a person and by regularly checking the progress you underline the importance of their work.

Another concrete example is the use of CCing managers on emails. In Germany people may get curious on why you include their managers in your emails and may see it as a micro-escalation, while in India people regard it as a positive thing when their managers are included in the distribution list. For them, it indicates that their contributions are important to the success of the project.

Those are just two examples (and stereotypes of course!), yet they do matter and they can be the difference between a successful project and a failing one. People that go by the rational “no news are good news” when leading distributed development projects may be up for a harsh wake-up call…

Before I hand-it over I quickly wanted to pick up on something that Marilyn wrote and share an interesting TED talk about empathy that I was instantly reminded of when she forwarded the blog to me.

The meaning of the word ’empathy’

In my opinion the stated Wikipedia definition of the word ‘empathy‘ comes very close to the German word “Einfühlungsvermögen“, which I personally would translate to a person’s “ability to relate to the feelings of others.”

If you break down the parts of the German word you end up with: Einfühlung + Vermögen. “Einfühlung” is the noun from the verb “einfühlen“, which would translate to “tap into someone/something’s feeling” (correct: to emphasize, to relate)  and “vermögen“, which as a verb translates to “being able to to something.” Interestingly enough, as a noun “Vermögen” means wealth… With this… I would like to conclude for today and hand it over to some of the community members that have been influencing me over the past years. In addition to the question Marilyn asked me I’d like to ask them to answer the following questions:

So, I blog it forward to the following people: Jon Reed, DJ Adams, Dick Hirsch, Matt Harding, Alisdair Templeton and – last, but not least – Oliver Kohl. Well, that list may not look very inclusive at first glance, yet to my defense, I’ve reached out to two of my favorite ladies from the community: Sue Keohan did already wrote her BIF blog already and the other is moving at the moment (with a toddler.) Of course, plenty of other people came to my mind that I would have liked equally well to blog forward to, yet I’m confident that they will get pulled sooner than later anyway…

Update: Very thrilled that together we got Björn Görke to join in… ah, the power of peer pressure on social media! 😉