I love this community initiative by my colleague and friend  xMoshe Naveh (Old Acct)  (he’s full of helpful ideas and is one of the most supportive and nicest people you could ever wish to work with).  This Blog It Forward Challenge http://scn.sap.com/community/about/blog/2012/08/20/blog-it-forward-community-challenge gives us an opportunity to humanize ourselves and deepen our knowledge of our community.

Moshe ‘Blogged It Forward’ to me. And importantly, gave me the opportunity to not only answer some questions that I can have a bit of fun with, but (as I am also a “serious” type) gave me a format to balance the fun with a purpose and I’ll use some of this space to talk about a theme that is becoming increasingly central to my way of thinking in the context of software development, collaboration and user engagement and that is:  Empathy.

If you are not a native speaker of English Empathy means: (according to Wikipedia)

“the capacity to recognize feelings that are being experienced by another sentient or semi-sentient (in fiction writing) being. Someone may need to have a certain amount of empathy before they are able to feel compassion. The English word was coined in 1909 by E.B. Titchener as an attempt to translate the German word “Einfühlungsvermögen” “

If anyone can give further translation to Einfühlungsvermögen I’d be forever grateful as it seems that empathy started as a German word and it would be great if German speakers could help me define this.  But more on the topic of Empathy, later.

My father (a photographer) documented two of those dreams back in the ‘50’s when I was a tot.

I guess I somewhat stayed with my “2 year old fantasy” of being a hacker (which in those days meant an onsite journalist), just like my uncle, Jack Fox who was a newspaper man and later became the executive producer for KNXT news in the 60s-70’s days of CBS broadcast Television.

I then grew up to be a four-year-old who wanted to be a doctor.  That dream came to an inglorious end when I realized that I would have to take additional courses in Chemistry.

But I guess you can see a theme emerging: writing/caring/healing/geeking out. 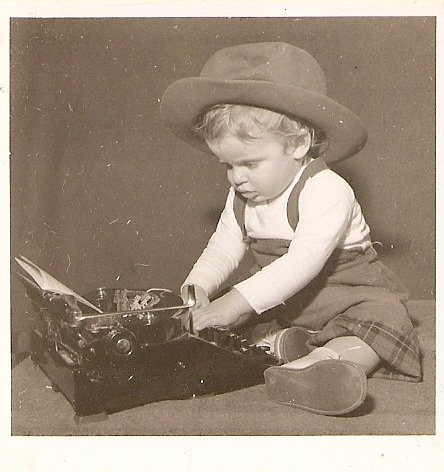 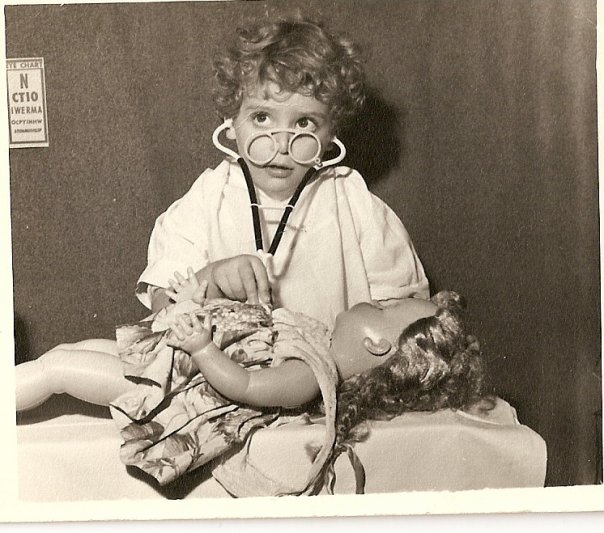 Wherever I happen to be.  I have the great fortune of having been in over 50 countries and in all of the 50 states of the US.  I LOVE to travel….and I love to host people in my home. At home with some mentors. Look familiar? 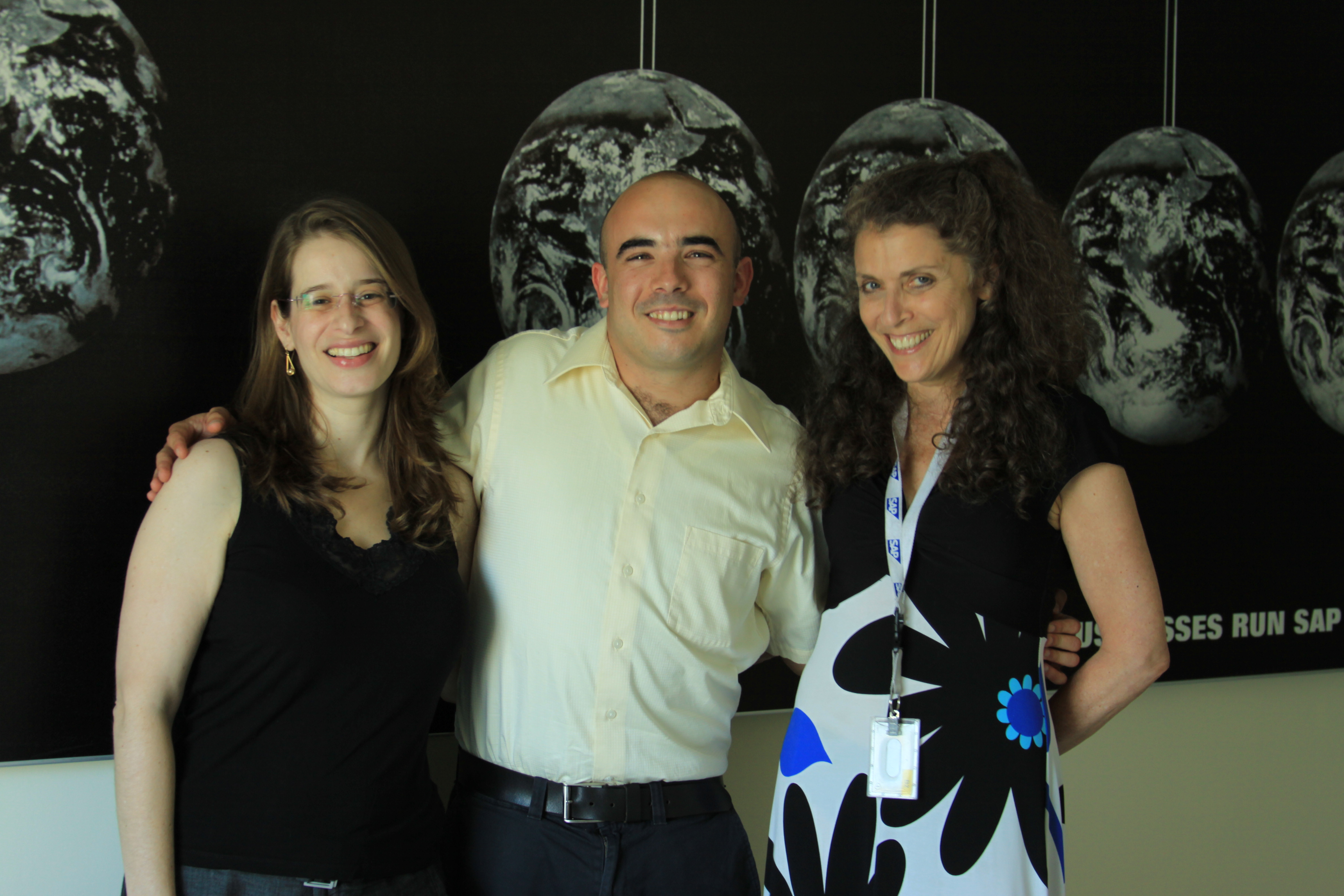 In Israel with some colleagues.  Look familiar?

Define fun?  One of the most inspiring projects I ever worked on was contributing a story to a compendium of stories that were written by people who had lived in “the Holy Land” (even the naming is contentious).  The book was called “Violence in the Holy Land” edited by Robert Wolf.  Through the project, guided by an NPR journalist and writer, I worked closely with Israelis and Palestinians to create ….here comes the word….Empathy.  We read and listened to each other’s stories and I made some incredible friends and started other empathy projects bridging middle-eastern girls from opposite ends of the political spectrum.  It was emotional, jarring, and perception changing.  That is the power of real empathy.

I’d like to create an SAP/SCN project along the lines of empathy exploring the Role of Empathy in Software Design.  I found a very interesting video and blog explaining empathy and it’s role in design on a website called: Realizing Empathy.

If we really use the principles of empathy in our work here in SCN, in the migration to a new platform, in the cycle of improvements,  in the collaboration between people of different cultures, genders, ages, I believe we can continue to grow a vibrant community.

In that spirit I’d like to blog it forward to some thought heroes of mine with the specific theme of Empathy .

Jelena Perfiljeva Audrey Stevenson Thorsten Franz Matthias Steiner Jonathan Becher (this is very naughty as I haven’t asked his permission and I’m not sure he will see this but heck, I think his management style is empathetic)

I’ll request that they answer two of the three questions that Moshe asked me as well as a third one.

Describe an instance when empathy in a project, development, collaboration, work experience, or community interaction turned a situation around (or should have).

What a great blog!  And great pictures too.  I love the idea of 'Realizing Empathy' - it is something I have been working towards in my own life.

Why, just today, I looked at something the way a user might, and thought, can we make it better?  As it turns out, we can.  Hopefully the users agree with me too 🙂

Sue, You touch on the heart of the matter when describing the role of Empathy in design.  Looking at something as a user or learning to feel like the user should "make it better"

Matthias Steiner  wrote in his Blog it Forward :

In my opinion the stated Wikipedia definition of the word 'empathy' comes very close to the German word "Einfühlungsvermögen", which I personally would translate to a person's "ability to relate to the feelings of others." If you break down the parts of the German word you end up with: Einfühlung + Vermögen. "Einfühlung" is the noun from the verb "einfühlen", which would translate to "tap into someone/something's feeling" (correct: to emphasize, to relate)  and "vermögen", which as a verb translates to "being able to to something." Interestingly enough, as a noun "Vermögen" means wealth...

thanks for your comments here and your personal share of your empathy experience.  Keep me posted please of how the users respond to Susan Keohan 's empathetic perspective 😀

I love the childhood pics, Marilyn! Your empathetic nature clearly has deep roots. Thank you for sharing so much of yourself with us and for being such a role model.

Thank you Gretchen.  I've seen others acknowledge you as their own role model and that makes me happy you are part of this community on many levels.  Not least because I've seen you stand up for the voices (and rights) of others, both in the SCN as well as the ASUG arenas. But being outspoken about your beliefs is something I can relate to 😉 .....and empathize with.

Thank you for an inspiring blog and for the person,colleague and friend you are!

Now I know why I always see you with a Camera:)

Or as my dad used to say when I was a child, that's why I always ran away from one (camera).  Now, as a "mature" adult, I enjoy the photographic prowess of many others in the community.

Frank Koehntopp , Gregor Wolf, Martin Gillet  Tom Raftery to name a few who have an art as well as a passion for capturing, documenting and sharing great pics.

Thank you for the kind words, Marilyn. I still have a lot to learn 😉

Well, I certainly have "a passion for capturing documenting and sharing" - my photos, art is too strong a word though!

Hi Marilyn, thanks for your blog and sharing this wonderful video blog on Empathy.

One way empathy is described is the ability to "walk in somebody else’s shoes", using all of our senses to truly understand by understanding what does it feel like for that other person.

Ever so often the other person may not able to find the words to tell us what it is they truly need and desire. Or in many cases when dealing with end-users of enterprise software they might actually be too embarrassed to tell us straight to our face that the design sucks and they are not able to do their job. Why? Because they don’t want to hurt our feelings or the feelings of their colleagues, hence we ought to empathize to get to it, get to the goals, true needs and motivations of the people we would like to serve with  a better software design .

Like the video blog says, it sounds like a very logical thing to do – but it does not mean it’s easy – good news the SCN is on to push Empathy-Awareness forward 🙂

And you dear Heike, in the vanguard of doing the pushing forward of the Empathy-Awareness theme.  I wonder if the brilliant folks that created touch pads, touch screen interfaces and devices were able to think with the intuitive and inquisitive minds of young children as well as productivity minded adults.  Watching a one year old engaging with an iphone made me really gasp with delight thinking how one must really sense, feel and be childlike in wonder to create such usability magic for human beings that lack language skills.  I want to see apps that empower those that are language and technology illiterate to participate in the digital economy.  I see such empathetic design as being a leap of egalitarian and emancipating design.  That would truly take us steps forward in bridging the digital divides that dramatically separate haves and have-nots.  Can't wait to explore with you.

Hi Marilyn, a very interesting post with some really good pictures! I like the question about Empathy, in the Sales Cycle it is something we have to exercise regularly in order to earn the trust and respect of the customer.

So if Matthias Steiner 's conjecture is correct about tapping into a feeling + wealth, then your sales cycle will be very profitable if you practice empathy 🙂

i'd to add a quote from Clay Christensen, who believes that the ability to empathize and therefore understand "what job needs to be done" for the customer is much more valuable than any demographic study.

"The jobs-to-be-done point of view causes you to crawl into the skin of your customer and go with her as she goes about her day, always asking the question as she does something: Why did she do it that way?"

I feel a bit sheepish.  It's been 6 weeks since you asked my to "blog it forward" and I'm only now getting around to respond.  And I'm not even sure a comment really counts...

Job? I didn't want to work. Seriously, I was interested in too many things to pick just one and commit to do that every day. As a kid, I was definitely a "jack of all trades and master of none."   I ended up in computer engineering largely due to an influential uncle.

The simplest answer is outdoors. Preferably on a hike; usually with no one else around. If you're on the SAP internal network, you might have seen my what makes me run poster. Work is completely immersive for me. That's why I like to take time on weekends to go for long hikes. It clears my head and allows me to think more deeply about topics.

Describe an instance when empathy turned a situation around.

One of my management guidelines is "hard on the issues, easy on the people." Failure is rarely the fault of a single individual. I'm not sure if empathy really turned the situation around, but free cans of Pepsi might have kept me from getting fired earlier in my career.  You can read the story here.

In the spirit of empathy and blog it forward, I just posted "Diversity Drives Innovation". What do you think?

i really liked the question you have asked in your BIF. 🙂

I liked all the photos that you have posted it is very nice and I was thinking about my old memories now!

I think you were enjoying your life in child hood. Am I right?

Have a wonderful weekend!