SAP BODS Jobs can be started & Scheduled from other Operating Systems like Linux, HP-Unix etc in addition to windows using third party utilities.

• The job initiates outside of SAP BusinessObjects Data Services

• The job runs from an executable batch file (or shell script for UNIX) exported from SAP BusinessObjects Data Services.

When a third-party scheduler invokes a job, the corresponding Job Server must be running.

3. To export a job for scheduling

The Administrator creates command files filename.txt (the default for filename is the job name) and a batch file for the job and writes them to the local LINK_DIR\log directory.

If you are Exporting the Job for Unix Environment append “.sh” extension to the File Name 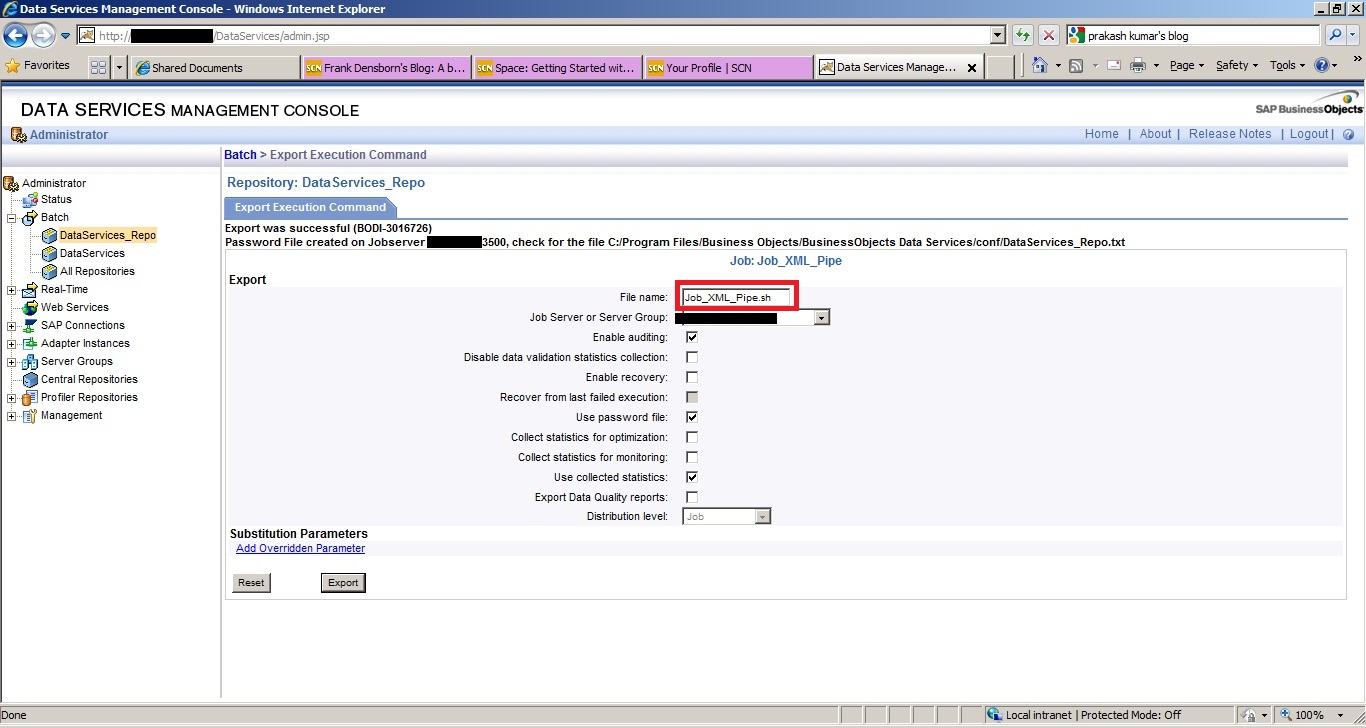 4. Setting up a cron job in UNIX-type operating systems

Note: The syntax may differ, depending on which version of cron is present on your computer.

Open a root shell and type the following:
crontab -u root -e
to open a VI style editor.  Press ‘i’ to insert text.

The crontab comprises five entries indicating the schedule time, and also the name and path of the program to be run. Use a space or a tab between each entry:

NOTE: “Job_BODSJobNM.sh is the name of the .sh file Exported form BODS Administrator”

When you have created the crontab, press ‘Escape’ to leave insert mode.

The crontab has now been set up. Cron will automatically send an email to root to confirm that the scan has run. For more information on cron and crontab, read the relevant manual pages. For example, type:

to see the crontab manpage.

5.To execute a job with a third-party scheduler

The Data Services Service automatically starts the Job Server when you restart the computer on which you installed the Job Server.

• You can verify whether all Job Servers in a server group are running using the Administrator. In the navigation tree select Server Groups

> All Server Groups to view the status of server groups and the Job Servers they contain.

To stop an SAP BusinessObjects Data Services job launched by a third-party scheduling application, press CTRL+C on the application’s keyboard.

6.About the job launcher

SAP BusinessObjects Data Services exports job execution command files as batch files on Windows or CRON files on UNIX. These files pass parameters and call AL_RWJobLauncher. Then, AL_RWJobLauncher executes the job, sends it to the appropriate Job Server, and waits for the job to complete.

Do not modify the exported file without assistance from SAP Technical Customer Assurance.

The following shows a sample Windows NT batch file created when the software exports a job. ROBOT is the host name of the Job Server computer.

There are two arguments that do not use flags:

• inet address: The host name and port number of the Job Server. The string must be in quotes.

If you use a server group, inet addresses are automatically rewritten using the -S flag arguments. On execution, the first Job Server in the group checks with the others and the Job Server with the lightest load executes the job.

The error messages are:

I'm able to run a job using generated script, but the execution isn't beeing logging at console. I cant see executed job at the console.