What a Subway mobile app tells us about enterprise processes

I just returned from a vacation in the States where I made a few long road trips. One drive was from the Bay Area to Portland (11 hours of pure joy along the ever-exciting I-5) which I spread over a few days.  During the trip, we stopped a few times at Subway and after a few visits I became intrigued by how customers could decide what they wanted on their sandwiches. I was not fascinated by the fact that customers can decide what they want (ham, sourdough, tomatoes but no onions, etc) – that is possible in most sandwiches joints – it was the fact that the process was standardized across all stores There were various steps involved – just like any other process in the enterprise world. 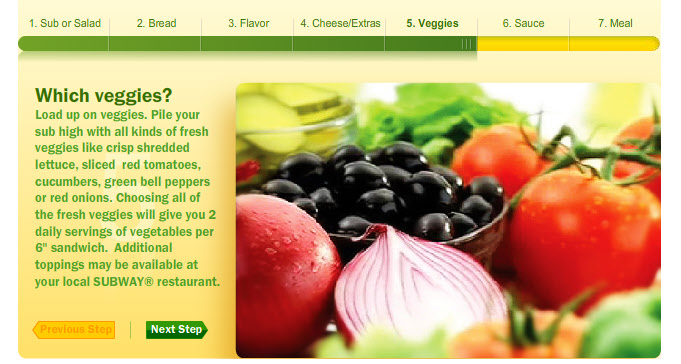 One morning, I woke up and started thinking about the possibilities of combining this standardized process with social media and mobile technology.

Wouldn’t it be cool if customers could decide what ingredients they wanted on their sandwiches before they went to the store.  My idea is that there might be a mobile app that enables you to create your sandwich (decide what you want on it, etc).

Your friends could look at your sandwich – comment on it, review it, improve it (Fork My Sandwich), etc.

The app could also tell you about the calories involved, etc.

When you arrive at the Subway store, the employee scans in a QR code from your app and the ingredients show up on their screens / own smartphones. The screening of the QR code by Subway staff also creates another location-based status update to Facebook, Twitter, foursquare, etc:

I’m ordering Dick’s Killer Turkey Melt at the Subway store on I-5 outside of Sacramento http://sub.me/ZTRETZTRTREW

The Subway community site could list those sandwiches that have been ordered the most, etc.

This same idea would work for other restaurants as well (pizza, burrito, hamburger, etc) as long as the ingredient selection process was standardized.

Note:  Subway already has a mobile app that has some of these features but doesn’t include the social media integration and appears to be restricted to items on the menu rather than sandwiches created based on customer selection.  Customers can also order Subway sandwiches online.

Relevance to the Enterprise

I realized how fun this app would be for the customer and the value that it would provide in terms of data for the Subway corporation itself. I then started to think about the possibilities of having a similar model for processes in the enterprise world. Would a similar degree of flexibility be possible for users when they are asking for a vacation or making a purchase order?  Such processes also have required tasks that must be completed in a certain order. What is often missing, however, is the flexibility within these particular tasks.  The processes are too standardized – too inflexible. Software vendors – regardless of OnPremise or Cloud-based – have no desire to provide this degree of flexibility as it leads to increased implementation and support efforts.  Yet for those customers who might use my proposed Subway app, this decision might not be understood – both creating a sandwich and creating a vacation request are processes. Just as I want to use my personal mobile device at work, I want to have a process that reflects my particular needs – for example, alerting my colleagues at work when I complete / improve a process.

The usage of social media – for example, integration with internal platforms (Yammer, Jive, etc) – might also lead enterprise users to playfully examine existing processes and try and improve them. This involvement might lead to the greater employee satisfaction since the processes more reflect their individual requirements. Project Robus – which is adding a collaboration / social layer to SAP’s applications – might provide such functionality if it was deeply integrated into existing processes.

Dick, I love this idea!  We have websites that allow you to order your pizza online, and it's ready for pickup, but I haven't tried to do it from my phone.  Always being on the run, it would be great to create your sandwich from your phone - and then perhaps not even wait for it to be made?

Thanks for sharing!
Sue

I like the idea as well and I can't understand why the big fast food chains don't already have apps that provide this functionality.

Weight watchers has a "decorate your own pizza" app that tells you how many calories your topping choices would be.  Of course, it should also automatically order from your favorite pizza spot, and then tell you the kind of gym workout you need to burn it off 🙂