9 6 9,308
When you are facing the challenge of migrating your custom applications to Netweaver Portal 7.3 you should follow this How-To guide: How To Migrate Custom Portal Applications to SAP NetWeaver 7.3. However, not always things go as planned. This blog will try to cover the possible deviations from the standard procedure described in the guide when looking for missing classes.
I’ll use the classes “com.sap.security.core.server.util0.IDException” and “com.sapportals.portal.prt.service.jco.IJCOClientPoolEntry” as examples.
We’ll start the process from the point when the application is already imported in the NWDS and you’re probably facing a lot of syntax errors. Let’s say one of
the errors is regarding “com.sap.security.core.server.util0.IDException”.
Let’s try to locate the relevant jar that contains this class.
1. Go to the Javadocs of NetWeaver 7.3 at http://help.sap.com/javadocs/NW73/SPS07/index.html 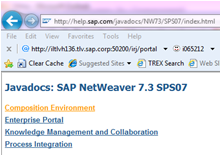 Now we need to locate the class. This class can be in one of the 4 groups we see. Usually there is an indication of the correct group in the package of the class. For example, packages beginning with com.sap.portal… or com.sapportal.portal… are under “Enterprise Portal”. In case of “com.sap.security.core.server…” it is under “Composition Environment”, which includes the core engine classes. In the worst case you can perform search in all the groups.

2. In the Composition Environment group we see the following:

Again, we need to scan the different groups to look for the class, and again we can find hints in the package names. In our example the class begins with “com.sap.security.core…”, so the security topic looks relevant.

3. Inside the group, look for the class itself (not the full package). Scroll down the page to the “Access Rights” part. 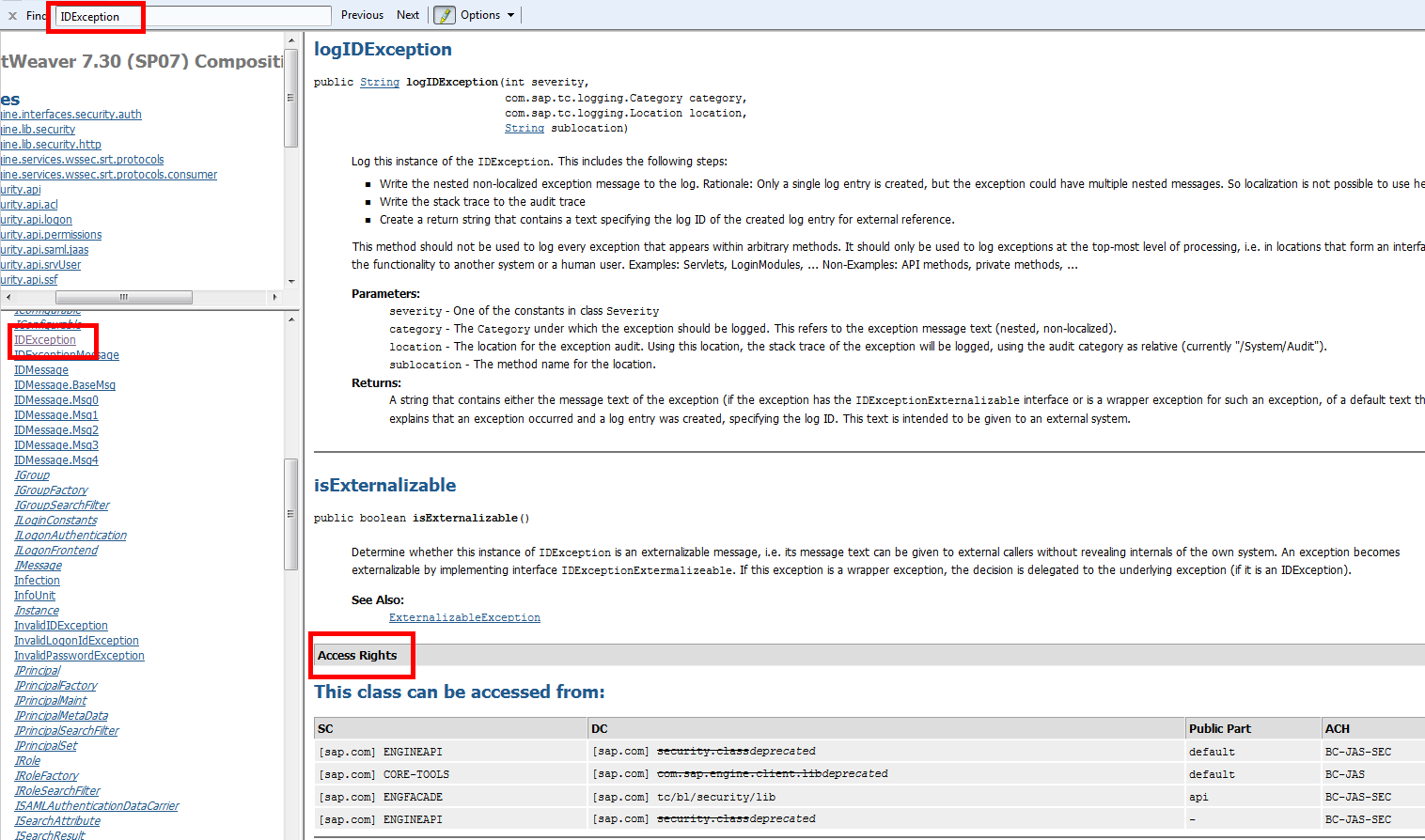 4. In this particular case there are four SCs in which the class can be found, but three of them are deprecated. Let’s take a look at the non-deprecated one. SC is the SCA – we see it is ENGFACADE. DC is the development component – we see that it is tc/bl/security/lib.

5. In the plugins subfolder of the NWDS installation there should be a JAR named com.sap.tc.ap.<SCA>_<version>.jar

6. Open the JAR and follow the path: <SCA>\DCs\sap.com\<the path of the SC>\_comp\gen\default\public\api\lib\java. There you’ll find the relevant JAR. 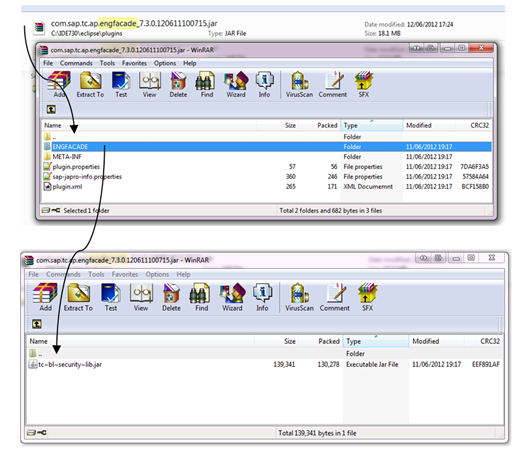 Steps 1-6 describe the process as it should occur according to the How To Migrate Custom Portal Applications to SAP NetWeaver 7.3 guide. There may be several deviations in the process:

If it’s a portal-related class (com.sap.portal…/com.sapportals…) – look for it in the Excel file attached to the note 1503649. This note specifies the SCAs and DCs that contain the relevant JARs.

Looking for the JAR should be performed as described in steps #5-#6 above. If it’s not a portal-related class – try searching the web 🙂 .

Download the relevant SCA from the SMP. Open it. Follow the path: BUILDARCHIVES\<DC>_comp~dcia.zip\. Take the api.ppa file, open it with
WinRar and drill down until you reach the relevant JAR.

As an example for the latest I’ll use class IJCOClientPoolEntry.

This class cannot be located in the Javadocs. Let’s look for it in the Excel file attached to note 1503649.

The attempt is successful. Looking for the jar com.sap.tc.ap.EPAPPSEXT_<version>.jar (or something similar) in the plugins subfolder of the NWDS installation is not so successful. Following the instructions in the second bullet will bring us to the required jar.

this is an excellent blog.

good and informative for people working on upgrade projects.

This blog is really useful. We are trying to locate below 2 jar and we dont see it in 7.3 javadocs and the excel provided in SAP note.

These are available in EP-APPS-EXT and EP-RUNTIME, but not available as public part.

We use below import statements in our code. Should we change the code or is there an option to use same code by adding above jar. Can you please help?

Have you resolved the issue.

I am also facing the issues in locating the JAR files for the two import statement related to urlgenerator.

Can you please let me know in which SCA under which DC they are available.

Thank you so much for this blog. You saved my day!

Thanks for sharing the blog.

It saved a lot of efforts.

Thanks for posting Alexandra. It is a great help.

Thank you very much, Alexandra for so helpful blog.

Thank you so much Alexandra. A very helpful blog.