Hi, this is simple document about the t-code UJKT and how can be useful to use this resource available in BPC NW.

Basically, UJKT it’s a testing tool. Dispenses execute a package in data manager to execute a logic script, hence reduces the develop/testing time. Besides has a complete log about the logic execution.

The UJKT transaction is divided in three frames: 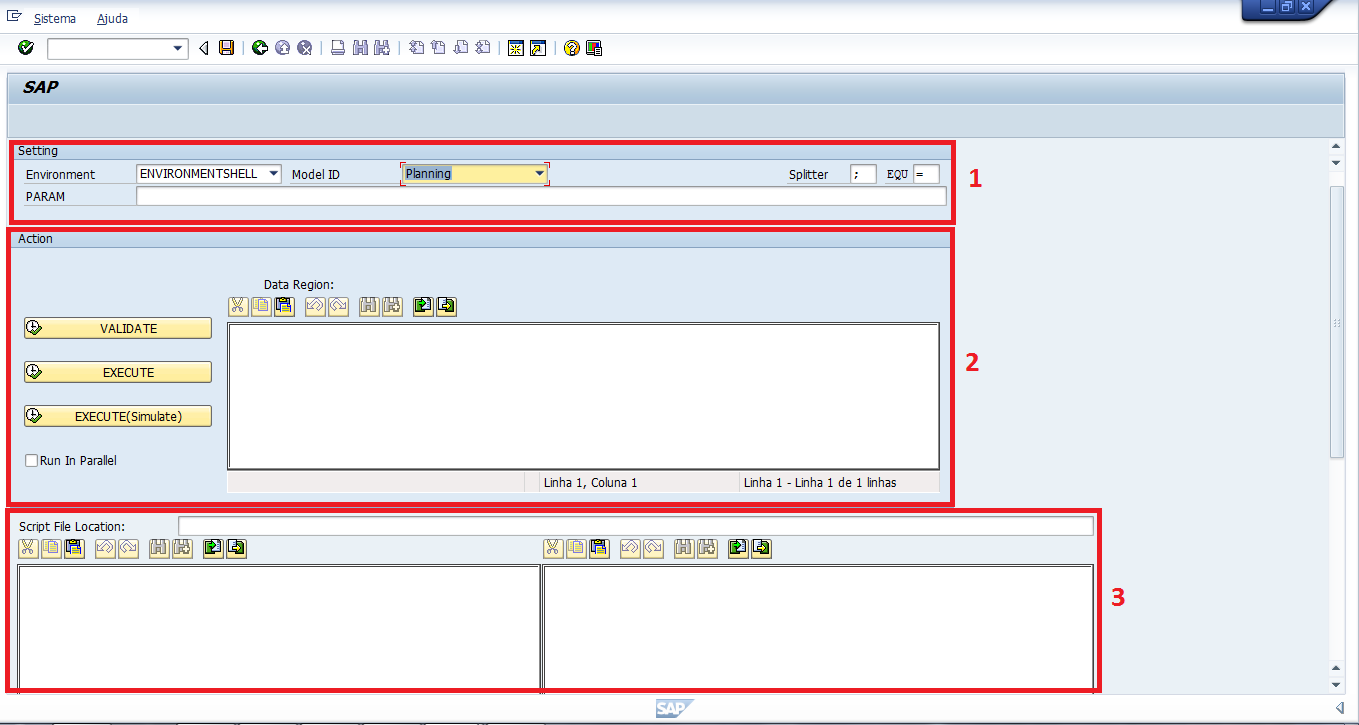 The Settings frame is used to determine the environment and the model, as the image below:

It is allowed also to simulate a variable created in data manager package.

In the script text variables can be used like:

The ability to pass PARAM’s to the script make it easy to test real scripts with $$ variables.

The Action frame contains the execution buttons, there are three of them:

1 – VALIDATE, will just verify the code, but not execute it.

2 – EXECUTE, will validate, execute and write the records in the cube effectively.

3- EXECUTE(Simulate), will validate and execute the script,  but not write the result in the cube.

PS: In EXECUTE (Simulate), there is no detailed records list with values to be written, in opposite that occurs in EXECUTE.

In the Action frame, has also an input area, Data Region, where it determines variables of scope, simulating for example a package with the PROMPT statement selecting and restricting dimension members. This can be done with the dimension name, such as:

The Script Code frame, placed on bottom of the transaction is divided into two. The first is an entry on the left side, where it is typed / pasted the logic script.

PS: If the script is saved on BPC Admin, you can also trigger it using the *INCLUDE statement to invoke it:

On the right is the log area, where is showed the calculations and results logs, or in case, the syntax error.

Above the example uses the Data Region resource, in the scope *XDIM_MEMBERSET TIME = %TIME_SET%.

Thank you for this document, I am new in BPC NW.

Please add to your very good document the explanation how to use the PARAM field in the Settings frame:

In the script text variables can be used like:

The ability to pass PARAM's to the script make it easy to test real scripts with $$ variables.

For 3- EXECUTE(Simulate) - it can be mentioned, that opposite to 2-EXECUTE there is no detailed records list with values to be written.

Thank you for dis Doc.

Nice document. Just be careful when using pretty print on your web interface and then taking your scripts to UJKT cause sometimes i get an error like this:

Even if the script validates correctly on the web. To solve it i just eliminate Tabs or additional spaces generated by the pretty print and it should work.

Cool it is useful info.. Thank you  🙂