Non SAP savvy users? There’s such a thing? As it turns out, there are quite a few of these users at a large Australian postal and retail organisation. Actually, it’s more accurate to describe them as non TECH savvy users, but that doesn’t seem as catchy. In any case, this blog is about how we implemented ESS & MSS in EHP5 specifically for a set of users that would appreciate the simpler and more user friendly UI. The content of this blog is based on the assumption that all relevant business packages and add-ons have been installed as per SAP documentation here and here.

As a background, there are approximately 700 retail post office managers at this organisation. These managers are in charge of an average of 10 staff in their outlet and most of these managers had an admin PC but only used it for email and Outlet Messaging. When ESS/MSS was implemented in August 2010, these managers were not included in the rollout and therefore had no access to online self service capability for themselves or their employees.

A few of the major pain points for these managers not being online with ESS/MSS were:

So with enough drivers for giving these managers access to SAP, the question was: do we give them the same access as all other managers (namely the “old” ESS/MSS)? These guys had never really experienced SAP before, so did we want to give them the “old” ESS/MSS as their first? We didn’t think so! Since we had upgraded to EHP5 in ERP and had half the prerequisites already there to use the new ESS and MSS Add-On, it was the perfect opportunity to give these users a better experience. Another benefit was that we could trial the new ESS before rolling it out to the existing users.

We wanted to give these users a simple UI experience that would give them everything they needed at their fingertips, so to speak.Our existing ESS & MSS had a plethora of services that would not all be relevant to these managers, plus the UI was more difficult to navgiate. We decided to give the retail managers a cut down version of the existing ESS & MSS, but with the new UI and utilizing the WebDynpro ABAP applications instead of the Java ones (only payslip and payment summary were kept on the old version in the interest of time). On top of this, we had users with no pre conceived expectations, so it was like carte blanche for us!

For MSS, we chose to deliver the following services:

We also included some On Behalf of Employee Functions:

For ESS, we chose to deliver the following services:

The anatomy of ESS/MSS in EHP5 has slightly changed, with the key difference the absence of the homepage framework. The following components are involved in EHP5:

Here are the key steps in implementing this solution:

See below some screenshots of our ESS:

See below some screenshots of our MSS team hierarchy and role navigation:

I hope this blog has helped give an overview of what needs to be done to implement ESS & MSS Add-On in EHP, and will help you achieve your own solution.

Many thanks also to Chris Paine who helped significantly with this implementation.

Thanks for sharing this information - it's nice to see the new add-on and the value it is bringing for customers on on-premise SAP. I also read your previous blog, so it's good to see some new HCM content on SCN - keep up the good work! 🙂

I was wondering if you could elaborate on the "Team Hierarchy (customized standard)" is this like a view of the org structure for a particular manager? Just wondering what you mean by customized standard - is that a standard Web Dynpro ABAP component that you have configured?

The team hierarchy is the visualization of the manager's team, but could also include the org units or positions under the manager. In our case we only showed team. We customized the visualization using the SPRO configuration I mentioned, like choosing the fields to be shown, the context menu, etc.

I was wondering one thing. in your post you mention a couple of pain points. One of them was  'after submitting a paper form, they had no visibility of the status of the process'

I was wondering what kind of solution you used here to give this insight.

In this case we utilized HCM Processes & Forms, so they could submit the form online and view the status in their status overview.

Nice Blog. Is it possible to make a particular section like personal data in MSS On behalf Personal Profile?

Thanks for the feedback. Yes this is definitely possible. You just need to put the ESS personal profile application in the MSS launchpad and pass the PERNR parameter so you can do it on behalf of an employee. When I wrote this blog we already implemented that in MSS.

Thanks for the feedback. Yes this is definitely possible. You just need to put the ESS personal profile application in the MSS launchpad and pass the PERNR parameter so you can do it on behalf of an employee. When I wrote this blog we already implemented that in MSS.

Thanks for the response. We have the onbehalf application. I just want make a particular section like Bank Information read-only. 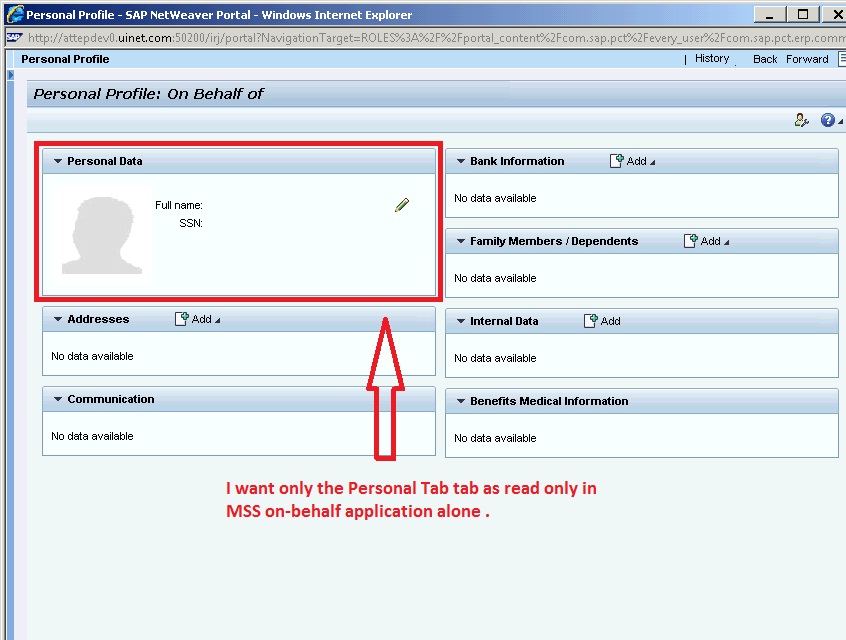 For me its personal data section which I have to make as read-only. PFB the snapshot.

You can make it read only in the component configuration of the UIBB.