SAP Test Data Migration Server (TDMS) is a high-speed data extraction tool that populates the development, test, quality assurance, and training systems with SAP business data from the production environment with a reduced dataset. SAP TDMS operates at client level, that is, the selected data from a client in the sender system is copied to a client in an existing system (non-production system).

The rationale behind SAP TDMS is as follows: Approximately 80 % of the data volume of a typical database is contained in less than 10 % of the tables. The biggest tables are normally transaction data tables. This means that small non-production systems for different purposes can be created by including only those parts of the data that are needed for the given purpose.Note that it is not meant to be used for creating production systems. 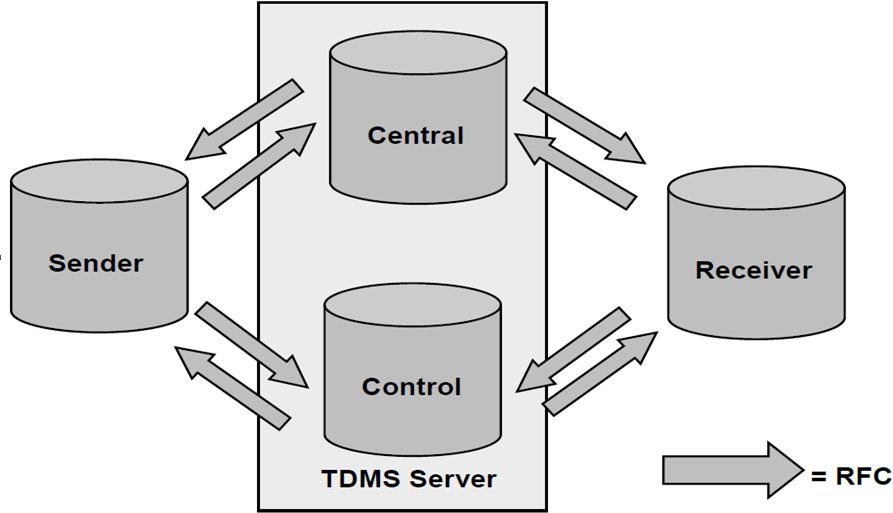 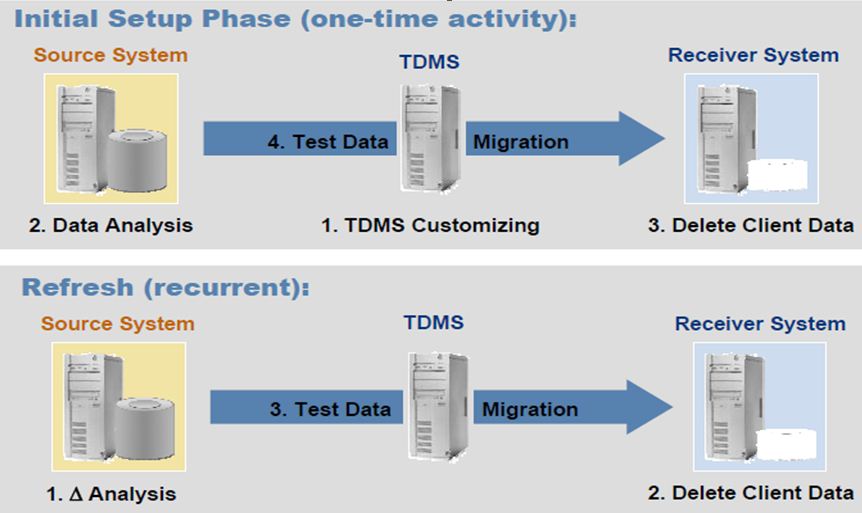 The phases in TDMS process tree are : 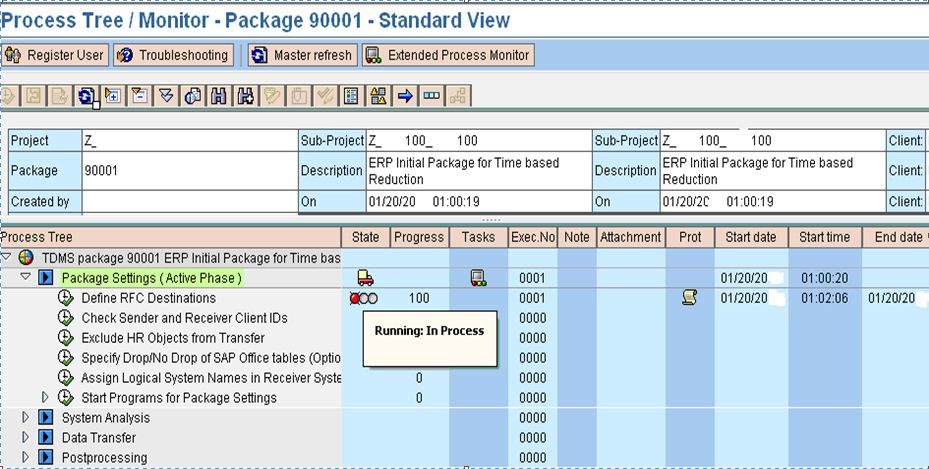 In this blog we will look into different issues and problems which can be faced in “ERP Initial package for Time Based Reduction” scenario.

1.1      The Performance of activity TD05X_FILL_EQUI is insufficient

Activity TD05X_FILL_EQUI has a very long runtime for some system constellations, sometimes as long as several days in System Analysis phase.

For some customer tables, proper Size Category is not assigned. Hence the data selection activity runs under DIALOG process instead of BACKGROUND, which results in short dump TIME_OUT.

In this case, it is attempted to calculate the access plan in the time span of a synchronous RFC call from the central to the sender system. The time limit for dialog work processes in the sender system exceeds.

The size category should be set to ‘A’ in the PCL definition of this conversion object, for the current package.

For this, go to the view V_CNVMBTCOBJ in central system, enter the package number, and then select the conversion object which was processed, and change the “Size Cat” to ‘A’

Size Category was set to A (Large Tables) for below tables:

The receiver system is a multi-client system, and the users in other clients cannot be locked while data is being deleted from the receiver client. Consequently, you cannot use a deletion method that involves dropping tables. If you do not want to lock the other clients, you need to change the deletion scenario to overall array-delete (O) at package level.

It is recommended to use activity ‘Change Deletion Scenario at Package Level – Optional’ in phase ‘System Analysis phase to switch the deletion scenario to:

During System Analysis and Data Transfer phase of TDMS package, performance issues have been noticed in Sender system due to the recompilation of the existing objects.

All activities listed below are performance-intensive in relation to the relevant data volume and data distribution (that is, they require a considerable part of the system resources such as CPU or memory). This applies to the application server and also to the database server. For this reason, you should ensure that sufficient resources (for example, ST06) are available on the relevant system before you start an activity, and that these resources are not currently being used by other system activities (transactions, background processing). If these activities are started in such a situation, performance problems will almost certainly occur.

This activity consists of individual activities that run in the background on the sending system (BTC process).Which individual activity is performance-critical depends on the applications used and the rate of utilization. The performance is basically determined by the accesses to the database (SELECT on large tables). You also have to expect long runtimes if this activity is executed repeatedly. In this case, the header tables that were created before must be deleted, which again extends the runtime.

This activity mainly uses the sender system, where it runs via an RFC call (for each conversion object) in a DIA process or BTC process. The runtime is basically determined by a SELECT on the affected table and, therefore, by the dataset and a possible selection group. Note that the affected table is accessed without restriction on the selection fields. A selection group is restricted to the fields in the assignment only if it was assigned.

This activity runs on the sending system in a BTC process. The runtime is basically determined by the size of the TDMS “header tables”. 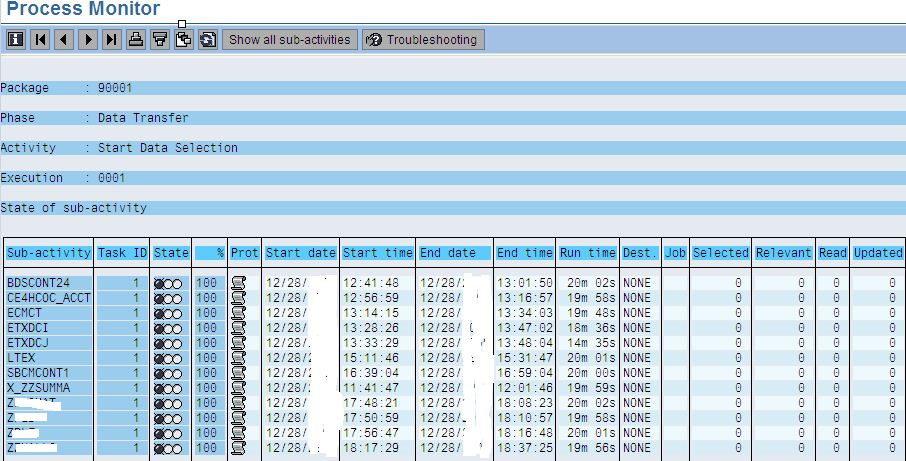 The error as seen from logs is:

This error comes mainly due to an interruption in RFC as can be seen in long text of the logs i.e. 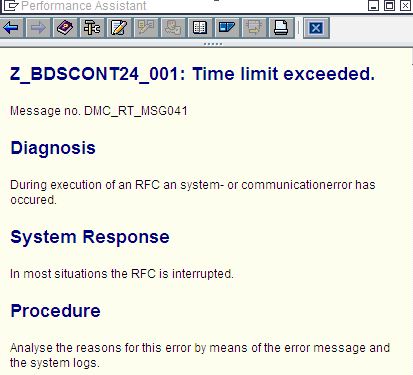 During Second run of Data Selection, the status was manually set to complete by user ‘…..’ i.e.

Hence, data selection for the 12 tables never took place and hence there is no way Data Transfer can take place for these tables.

Also, there is one object for which nothing has been run possibly because the table was added later on for transfer i.e. 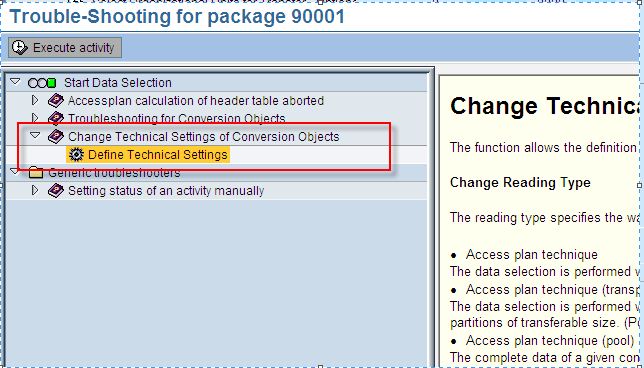 Specify current package number if not automatically taken and execute: 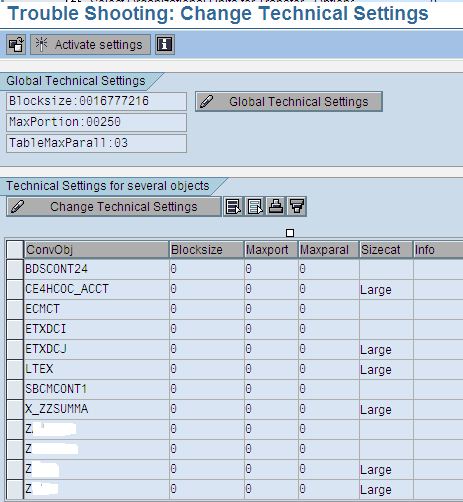 Change Size Category to Large as indicated below: 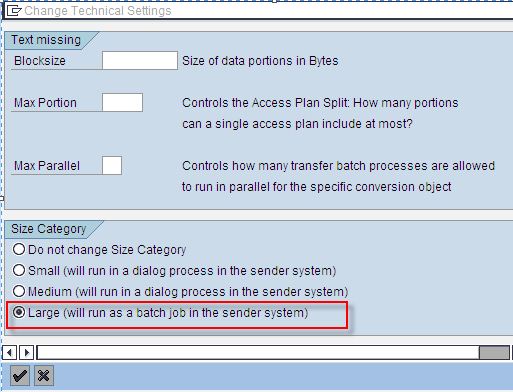 Save and then Activate Settings

Once done, go back to the previous screen

As the drop down for “Troubleshooting for Conversion Objects” is not available, please execute the report ‘CNV_MBT_TS_PCL_DTL_REPAIR’ which is the exact same report run by the troubleshooter.

When activity is successful Start Data Selection again for the aborted objects.

Thanks for your comments. This is for TDMS 3.0 with add-ons :

Well done for giving people a good place to start

Nice Blog.  Makes Life much easier for people who are new to TDMS.

Dane, thanks for the encouragement

I would like to thank you for this great contribution. Is there a list of parameters where we can modify settings using "troubleshooting" option inside activities? You mentioned P_FULL in section 1.1 based on a SAP note. I wonder if we can see other available parameters.

I would like to thanks for given perfect solution for new and old users also who are not doing this jobs.

I like this place to update knowledge in verious field.