An Event to Remember: Mastering BI in Australia

Mastering BI in Australia is a 2 day event this year (August 6-7) in Melbourne, co-located with Mastering BusinessObjects.

I spent the day before and the after the event with in workshop on BI4 including BusinessObjects Design Studio, also known as Zen.

The above picture shows students working on their exercises.  Questions surrounding do you replace BEx with Web Intelligence (no), why should you use the BEx Query and not the cube when using BusinessObjects tools, and much much more was discussed.

The next day, day 1 of the event, I started by spending time at some vendor booths. 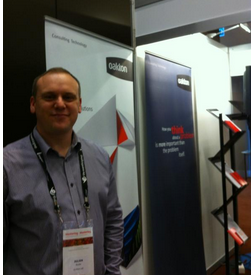 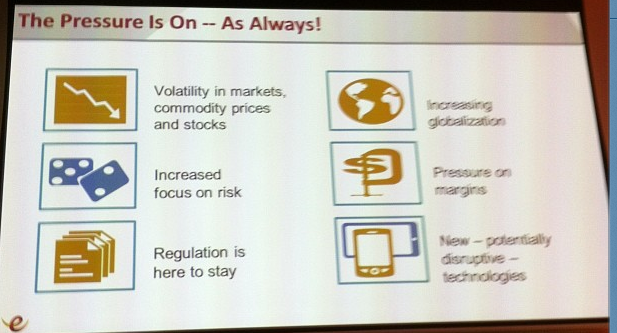 The keynote was from Kurt Bilafer, SAP, about analytics.  This slide discussed that the “pressure was always on”. 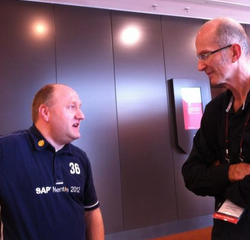 This is a picture of Ingo Hilgefort at the Speakers Corner with Matt Morrisey, of Western Australia Water. 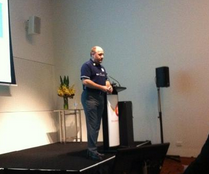 This is Ingo Hilgefort at his session, “Selecting the Right Tool” – Ingo has refined and updated this presentation, a must-see for future conferences. 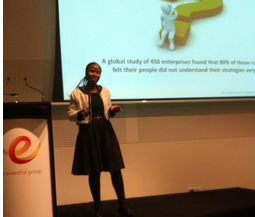 This is zimkhita buwa of City of Cape Town, discussing her company’s BI strategy story and her story about SAP Strategy Management, a topic she is very passionate about.  She is presenting at Mastering BI in South Africa in a few weeks, and she will be giving an SCN Webinar in November.  She has a great way of engaging the audience.  She spoke positively about the SAP Ramp-up program as well.

I also attended Paul Sullivan, of DuluxGroup, session on BI4 upgrade experiences. Paul explained his company’s decision to reimpliment, not upgrade, to BW 730.  He spoke positively of BI4 integration with BW 730.  He had a great quote too “to know the data is to love the data”.  Reimplimenting saved 207% over 5 years, said Paul.  They also use BI workspaces for dashboards.  He said not implementing SSO gives users an excuse not to use BI. 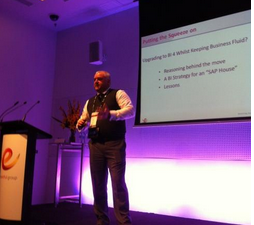 Corey Adams, Frucor Beverages, discusses his company’s BI4 upgrade experience.  Corey met attendees by the door, offering his company’s Frucor beverages as a drink to attendees.  A session I won’t forget anytime soon.  His company’s project was called “BI4 Simplify”.  Corey Adams also goes by @Oz_Bob on Twitter.  It was fun to meet him in person as he is active on twitter.  One of the reasons to upgrade was to build a universe on top of ECC.  He also had a “Help me Ingo” slide:

He said he learned that the end user determines the right tool, after talking with Ingo Hilgefort. 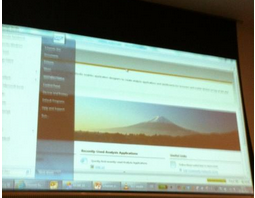 SAP’s Eric Schemer presented on the Analysis Tools, including the “flagship” Zen product named SAP BusinessObjects Design Studio.  Eric reviewed roadmap and timelines, and said while they are not enhancing BEx Analyzer, they are working on an eclipse-based version of Query Designer.  If you missed this I highly recommend attending SAP TechEd.

I spent a lot of time myself in the Speakers Corner, where attendees (“delegates”) asked questions.  I was impressed too with questions from partners asking how they can help their customers better adopt technologies.  I also met several delegates from New Zealand.

Overall, this was a great event, and I learned much.  Special thanks to the Deb Burgio and Carolyn Watt of the Eventful Group and the entire Eventful Group team who wins the gold medal for conferences (someone posted that on Twitter, and I agree).  Eventful thinks of everything – from speakers to attendees they do not miss a beat.  If Eventful calls you, and wants you to present at a conference, say “yes” immediately.  If you get a chance to attend one of their events, do not hesitate to attend!  Special thanks to Ingo Hilgefort and Eric Schemer, SAP, for everything as well.

When returning home, I wore my “Kansas Jayhawks” t-shirt (traveling for comfort).  It was so nice to have people come up to me in Melbourne, Sydney and even San Francisco who knew my team’s chant “Rock Chalk Jayhawk”.

It feels odd to wake up at home and not ask for a “long black coffee” – the coffee of Australia.  Great people, great country and great event.

I can only reiterate what Tammy says about the Eventful Group; Whether as a speaker or as an attendee, they can not do enough to look after you, from making sure the registration is as painless as possible to finding just the right person you need to speak about a work problem.