Will a Lack of Data Sharing Put Airline Crews and Passengers at Risk? 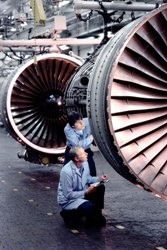 I know you’ve heard of tree huggers, but have you ever heard of server huggers?

I’ve heard this term used to describe businesspeople who refuse to sacrifice their departmental application or database to the (presumed) greater good of cross-company integration.

Maybe it’s because the application they are using does more than the one they are being asked to replace it with. Or perhaps they are worried that they will lose access to the data they’ve taken for granted until now. Or maybe they just live by the old “knowledge is power” maxim and don’t want to share.

Regardless of the motivation, data and application ownership are big issues when the goal is to integrate a smaller world into a larger one. The tragic failure of U.S. Intelligence agencies to integrate and share information prior to 9/11 is the most dramatic example.

But there are others—including one that we should nip in the bud before it becomes an issue: data sharing among the various entities that manage airplane Maintenance and Repair Operations (MRO).

Putting all the data together into one place could do a lot of things, as I’ve discussed in this post on Forbes and in a post recently on SCN. Flights could be more timely, more fuel efficient, and most importantly, safer. That’s worth weeding out the server huggers.

As our SAP airline industry experts, Wolfgang Ullwer, Sameer Deshpande, and Phil Te Hau told my colleague Stephanie Overby and me recently, the aircraft manufacturers originally positioned themselves as the ones to handle all the data because they could potentially look across a wider set of data than any individual airline. But air carriers—who maintain airplanes from several manufacturers—naturally prefer a single solution for their fleets.

Yet it’s important that we take a step back from both those possibilities and consider what would be best for flight crews and passengers—not just the companies involved. There’s a lot at stake here. Here are some of the issues that are emerging as the industry starts to work through the problem:

What do you think? How have you made data sharing happen among multiple organizations in your experience?