When writing a script in SAP Sourcing/CLM if there is a need to query the database tables most of us are used to using the DBHandle class which is a powerful IAPI. The script developer would have to first open a database transaction, execute the SQL SELECT statement and finally close the database transaction. While this approach works fine, there are very specific coding protocols to be followed to ensure proper transaction management. Not following these protocols could result in too many open transactions and may lead to undesirable side effects or even an unusable system. In SAP Sourcing/CLM 7.0, SAP has introduced new IAPIs that allow the script developer to easily and safely query the database and get the result set. These Query IAPIs are quite powerful and in this blog I will explain how we can take advantage of them.

How to use the Query IAPI

I won’t be getting into the details of writing a Query Definition in this blog, however, if you are not familiar with the query syntax I would encourage you to review the Query section of online help of SAP Sourcing/CLM which can be accessed from http://help.sap.com/saphelp_sourcing_90_p/helpdata/en/39/8ee60a3d74482e9e0111c46dc1e23d/frameset.htm

There are a handful of Query IAPI classes there are available to us which can be accessed from the java docs from Reference Guide as shown in the screenshot below. 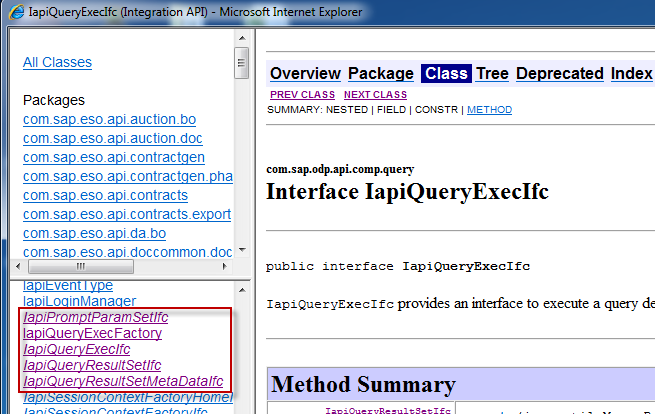 The code snippet above should be quite self explanatory; however, I’ll point out some of the nuances. On Line 2, the Query Definition Internal Name is passed to the IapiQueryExecFactory.createQueryExec method.

On Line 3, the getParameterSet method is called and is needed for successfully executing the query.

The execute method on Line 4 takes in a Map as an input argument. In cases where there are no filter parameters involved, an empty Map can be passed as shown in the code snippet above.

resultSet.getMetaData() on line 5 should be present to get the result set back from the Query Definition.

It is very important to use the IapiQueryResultSetIfc.close() method to close the result set when it is no longer being used. It is recommended to use the try/finally block to ensure that the close method is called. Also, make sure all the exceptions are logged.

Even though using Query IAPIs requires creation of a Query Definition, it is still a better approach to query the database when compared to DbHandle. I hope you found this blog useful. Please feel free to provide your comments and feedback on the comments area. Enjoy!

I am not sure how I missed it and continued using DbHandle APIS. The most obvious advantage of using Query APIs should be the freedom and ease to use tokens in query definition. This is one area where DbHandle APIs lacked.

Thanks for the info. Its appreciated.

Thanks for this blog post Vikram. This new IAPI makes access to objects based on the value of an extension much easier and cleaner.

Well explained and the content is very useful too.

Thanks for the blog. Just want to know if this is possible in CLM2.0?

Thanks for this blog. We are trying to get a user account based on a custom query with filters using these IAPIs.

We have iterated to the resultset where our conditions match. We can read the individual result column strings. However, is there a way we can get an object reference to the user account with the resultset parameters? getObjectReference() of the complex column type did not do the trick for us. Since there is no home object for user account, we are a little stuck.

addApprover(resultSet.getObjectReference(2)); //this does not get us the user account object reference
}
}