Last month, researchers from the Security and Trust Research Practice attended the IEEE COMPSAC conference to present a paper on the IPAAS (Input PArameter Analysis System) project. This year, COMPSAC was held in Izmir, Turkey.

In a previous blog post, we reported about the results of an empirical study on Input Validation Mechanisms in Web Applications and Languages. In this study, we examined a large number of vulnerable web applications and the results suggested that the majority of SQL injection and a significant number of cross-site scripting vulnerabilities could have been prevented by rigorously validating input. Furthermore, this study suggested that one of the reasons of why critical web vulnerabilities such as cross-site scripting and SQL injection are still very common, is that developers are not particular good at rigorously validating input everywhere in web applications that there should be. The main goal of the IPAAS (Input PArameter Analysis System) project is to tackle this problem.

IPAAS is an approach to securing web applications against XSS and SQL injection attacks using input validation. The key insight behind IPAAS is to automatically and transparently augment otherwise insecure web application development environments with input validators that result in significant and tangible security improvements for real web applications. 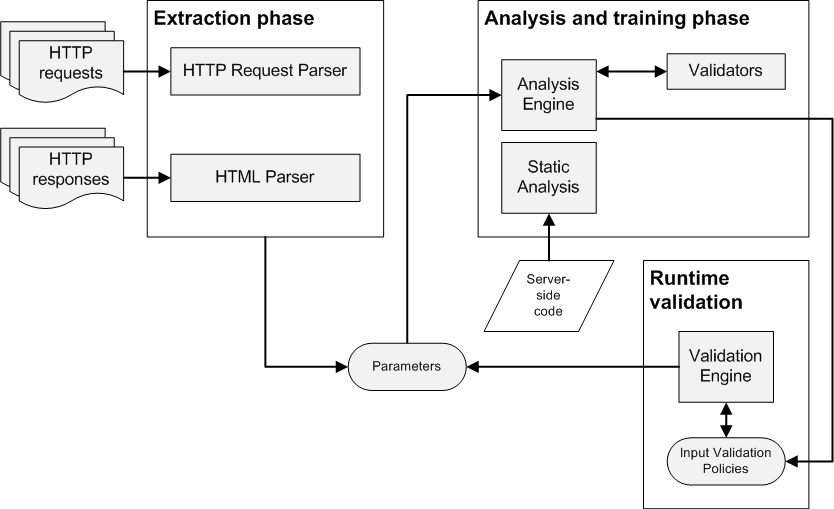 An architectural overview of IPAAS is shown in the Figure above. IPAAS can be decomposed into three phases:

In this blog post, I presented the IPAAS approach, which improves the secure development of web applications by transparently learning types for web application parameters during testing, and automatically applying robust validators for these parameters at runtime. The evaluation of IPAAS confirms the results of our empirical study that a large number of SQL injection and cross-site scripting vulnerabilities could be prevented if input is rigorously validated.

The work leading to these research results has been a collaborative effort between Prof. Engin Kirda and Prof. William Robertson from Northeastern University (Boston, United States), Prof. Davide Balzarotti from Institute Eurecom (Sophia-Antipolis, France) and the author of this article who is employed as a Research Engineer by SAP Research (Sophia-Antipolis, France).