Finding a Future in a Favela

The SAP Social Sabbatical program is one designed to expose SAP employees to new situations and new work related challenges to hone the leadership skills and deepen the participant’s cultural understanding of emerging markets.  Here in Belo Horizonte Brazil, I am working with Maos de Minas, helping to initiate changes to their supply chain process.  Maos de Minas along with their affiliate, Centro Cape,  is dedicated to the advancement and growth of the Minas Gerais artisans as small business owners.

In a meeting with Tania Machado, a member of the board of artisans of Maos de Minas and President of Centro Cape, we learned that there are efforts underway to expand the community of artisan small business owners.  While the organization is continuing to identify artisans at craft fairs and through word of mouth, the efforts have expanded into new towns and neighborhoods, searching for talented entrepreneurs who could use a hand building their business. To this end, Maos de Minasand Centro Cape are teaming with community-based organizations working in the Belo Horizonte favelas to find and develop small business owners.  Tania suggested that our sub group travel to a favela and see a business first hand.

Favela is a word that I learned long ago in grade school.  It was the label used to describe the slums of large Brazilian cities.  As I grew older, and I first traveled to Brazil in the 1990’s, a co-worker warned me that favelas were dangerous places that I needed to take steps to avoid on a business trip.  Preparing to travel to Brazil for the Sabbatical, I read a number of news stories covering unrest in the neighborhoods and of clashes with police.  Now, finally here in Brazil, my client contact is suggesting we go with new business trainers to initiate contact with artisans who are working and living in a favela.

There really was no question – the team and I immediately said yes!  Then Marcio, another client contact, stopped by the office with warnings – don’t bring big bags, or loads of cameras with you, keep it as simple as possible.  Hmm, what exactly were we getting ourselves into? We ended up traveling by company van to a community center.  Then with the trainers and the community center social workers, the larger group would split up to travel to three separate artisan locations.

The community center is located in a slightly rougher neighborhood than we have been exposed to in Belo Horizonte.  The graffiti filled walls, and the much smaller, and older houses and buildings in the area were definite indicators that we were in an entirely new part of town.  The director of the community center briefed the entire team warning us that the business owners might be resistant to a discussion about their operations and growth.  He said that other organizations and efforts had been through in the past but never quite completed all that was promised to the business owners.  The people of the favela are generally distrustful of outsiders, and the director warned the trainer teams that they may meet with resistance.   So we piled into an assortment of cars, and headed out. 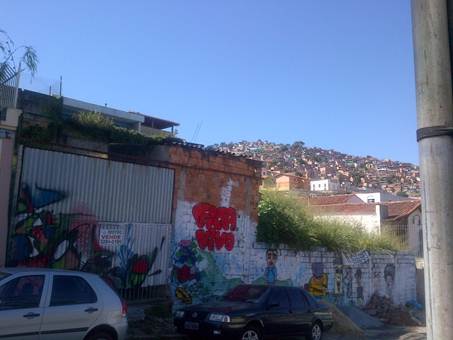 Outside the community center, the favela visible high above on the hill.

Initially, while the streets were narrow, the way was not very steep.  The street was more like a bumpy country lane pockmarked with potholes and unpaved sections.  As it wound its way up the side of the hill, the lanes got steeper, and  the way narrower. The houses all looked the same – small, no more than two or three rooms at best, mainly all painted mustardy yellow or grey.  These small houses made of cinderblock and brick, with roofs of clay bricks, on streets with no names.  The social worker in my car indicated that the official government estimate was that there were at least 45,000 men, women and children living in the favela – however, the community center believes that number vastly underestimated. 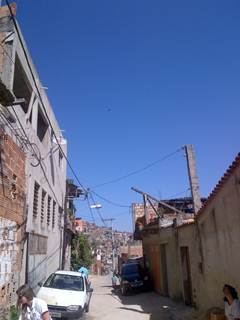 Street outside the furniture shop

We arrived at the doorstep of a small furniture shop where the owner and his two man team were working on a cabinet – covering pieces of wood with a laminate type material. The team of three trainers, three sabbatical participants, two Centro Cape employees and one community worker were welcomed to the shop, and okayed to take pictures.  We were told the shop is well respected in the neighborhood, and the residents trust the shop owner to provide quality furniture at reasonable prices.  The trainers huddled with the shop owner close to one of the table saws, and began to share their personal stories of business growth with the furniture maker. 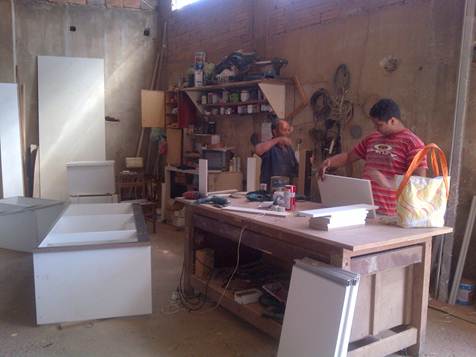 The team of three women trainers was very enthusiastic, and eager to begin the training, and share their personal stories, and the male shop owner willing and open to listen.  This was the intro to the training – and perhaps the start of something great!  With the training provided from Centro Cape, and the commercial support through legal invoicing and business assistance from Maos de Minas, it may be possible for this small favela based furniture operation to grow.  By hiring more workers, and developing the skills of his team, this small shop owner is building a business in a community that is often short on cash, but big on dreams.

While waiting for the training introduction process to unfold, several of us went out into the street to get  a better feel for the neighborhood.  Children were playing soccer on the street, while their dog was curled up sleepily watching and waiting for them to be finished.  Somewhere on a street below, there were people flying a kite high up on a brilliant blue sky day.  Then a mom called the soccer players in for lunch.  Down at the corner looking down the street, we had an amazing view of all of Belo Horizonte down at the bottom of the hill – one of the prettiest views we had seen to date.  The favela, a place entered with trepidation, and hesitantly earlier in the day, turned into a quiet neighborhood.  Granted, we were there in the middle of a business day, and with a group of nine people, but the place that we found was just like any other neighborhood anywhere.

As Henry David Thoreau stated,”If you have built castles in the air, your work need not be lost; that is where they should be. Now put the foundations under them.” Business begins with an idea and a dream.  High in a favela in Belo Horizonte, there is a furniture business working hard to build a strong foundation for their business, perhaps building it with help from Maos de Minas and Centro Cape.

To learn more about our team experiences in Brazil, please check out this link to a video of our experiences:

Thanks, Judy, you have taken some iof the mystery out of what the favelas are like.