When I started BPC after few days one question came into my mind that what are the main differences between two versions of SAP BPC.  I get my answer by lot of research and study. So now I decided to put all these points into blog to facilitate new comers and those who want to migrate from one version to other.
The two versions SAP BusinessObject Planning and Consolidation NetWeaver 7.5 and SAP BusinessObjects Planning and Consolidation Version for Microsoft 7.5 share a number of features and capabilities.
Similarities:
Both versions uses familiar Microsoft office client to deliver ease of use for business user and both versions delivers automatic business process flow to provide structure to collaborative task.
BPC NetWeaver and BPC Microsoft both allow concurrency lockup, monitoring of user activity, application optimization, and a number of other common task. But there are key differences that you must me aware of.
Two versions at a glance in below figure. 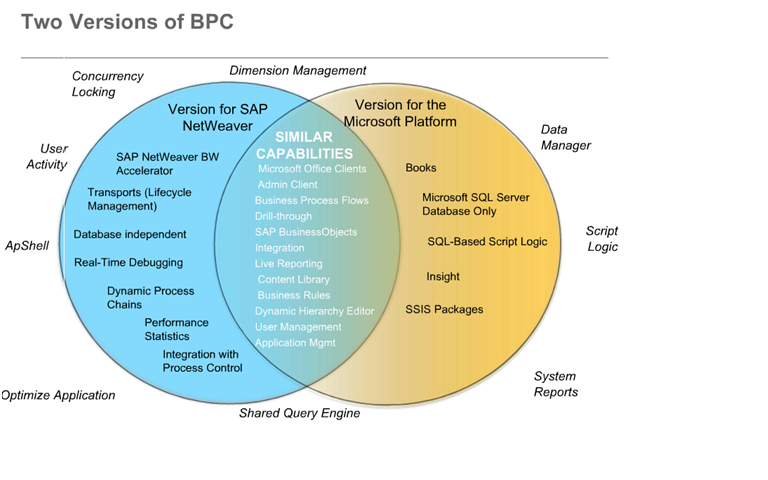 Differences:
BPC Microsoft is dependant on SQL Server database and can only use sql based script logic.
BPC NetWeaver is database independent and leverages number of  powerful SAP features to provide life cycle management, real time debugging and other key capabilities.
It is important to note that two versions are not interchangeable and migration from BPC Microsoft to BPC Netweaver is notautomated. To transition form one version to other require manual intervention and should be consider an implementation project depanding upan complaxity.
The below table is pointing towards key differences between two versions of SAP BusinessObject Planning and Consolidation.
Alerting is not available for unauthorized users

I have a basic question.

In BPC MS, is Script Logic the only way to implement business calculation?

As I know that we can implement BADIs in BPC NW, is there any thing like BADIs can be implemented in BPC MS to perform complex business calculations?

In BPC MS for complex business calculations if Script Logic (the standard syntax) did not meet your needs you could write your own stored procedure in T-SQL to achive your desired result and call that to execute whatever you needed.

Do you happen to have a similar comparison between MS and NW for BPC 10?

Please add it here if possible. Thanks.