If Ofcom (“the Independent regulator and competition authority for the UK communications industries”) needed any more evidence of the texting behaviors of UK consumers, the London 2012 Olympics Opening Ceremonies provided a perfect forum for texting, before, during and especially after the fantastic Danny Boyle directed extravaganza.

Since Sybase 365 has a unique role in delivering inter-carrier traffic between mobile operators, around the world, we can use statistics from that data to provide very accurate estimates of texting (or SMS) traffic around the world. For the Olympics, we were and are watching. For the record, my SAP DB colleagues would note that I would be amiss if I did not mention that all SMS traffic data is powered by SAP Sybase IQ. That said; let’s take a look at some macro, hourly data: 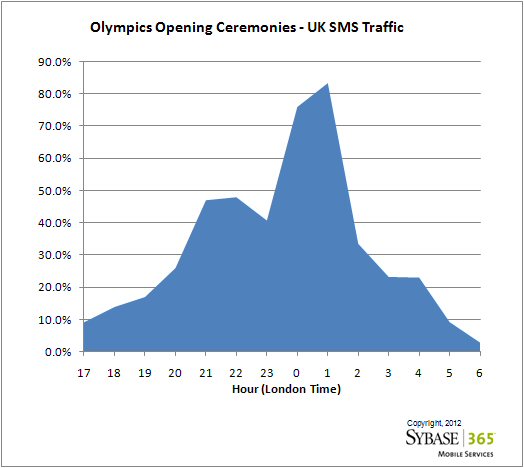 The graph shows the SMS traffic departure from “normal” based on UK subscribers sending Mobile Originated messages. As you can clearly see, SMS traffic grows steeply as the ceremony begins, peaks, and then the departure from normal AFTER the event tops 80% between midnight and 1am! These are times when normal SMS traffic begins to decline to much lower nighttime volumes. However, in the early morning hours of the 28th, there was a lot of reaction throughout the wee hours until 5-6AM when things leveled off. The Olympics kickoff was quite the exciting event and the residual SMS traffic clearly shows that reaction. I should note at this point, we reviewed SMS traffic from other countries as well, but none were even close in terms of overall statistical significance as a result of the opening ceremonies.

We also looked more detailed 10-minute intervals of UK MO traffic over the three days: Friday, Saturday and Sunday (July 27th-29th).  In this graphic, you can clearly see “normal” traffic on Saturday and Sunday, contrasted with Friday’s build up to the opening ceremonies. As we are looking at the 28th and 29th, it is evident that none of the athletic events generated enough overall interest to cause a statistically relevant up-tick in the SMS traffic, but the Opening Ceremonies generated significant traffic surges.

As you can see from the key events on the graphic, the SMS traffic is either very reactionary or anticipatory to certain events. For example, there was a significant text boost in the 10-20 minutes prior to the British team’s arrival in the stadium.

SMS, as a Person-to-Person communications method is clearly still an extremely popular medium. Despite significant impacts from OTT players as well as iMessage (which is really not measured here), I expected some SMS-based reaction, but not as much as was seen. Certainly Twitter is today’s medium to comment, post, and discuss events such as this; however, SMS remains the preferred, personal communications medium between individuals.