When Craig Cmehil first posted the SAP Hana Code Jam in Newtown Square, I immediately signed up.  I am glad I did.  I have spent time in SAP Hana on the Cloud Share, and I was able to create Analytic, Attribute and Calculated Views.  I was able to connect it to BusinessObjects Explorer and Analysis Office.  But why code on SAP Hana?  This is the reason I attended.

Today, Rich Heilman and Thomas Jung along with Ronald Silberstein of SAP spent the day showing us how to code with SAP Hana.  Thomas showed us an ABAP Instance in SAP Hana as well.

It was a “PowerPoint-less” day without slides.  SQL Script was reviewed, it was described as an extension to standard SQL.  It allows you to pass multiple parameters, and allows for pushing logic into the database layer to get “closer to the data”. 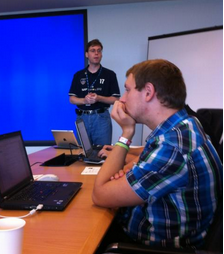 Picture above is Thomas Jung discussing SAP Hana.  The blue screen shows there were no PowerPoints today.  Also in the picture is an intern with SAP IT.

Today we learned that CE functions are the preferred way to write logic in SQL Script as functions are highly optimized.  Thomas said CE functions are easier to read.  An attendee asked “where is SE11 in Hana?” – it is not there yet, but you can look at the catalog.

Thomas also demonstrated a nice SAP purchase order worklist using SAPUI5, which is HTML5 based, with no UI controlled flow on server.  The UI is client side and makes REST-based calls to the server when needs data.  His demo included over 1 million rows of purchase orders with a very fast response time.  Included in this demo was a Google-like search experience. 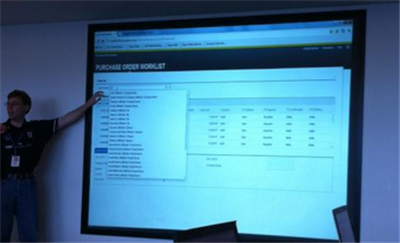 Above is Thomas showing his purchase order worklist demo.

Most of the day was spent doing exercises on SAP Hana. 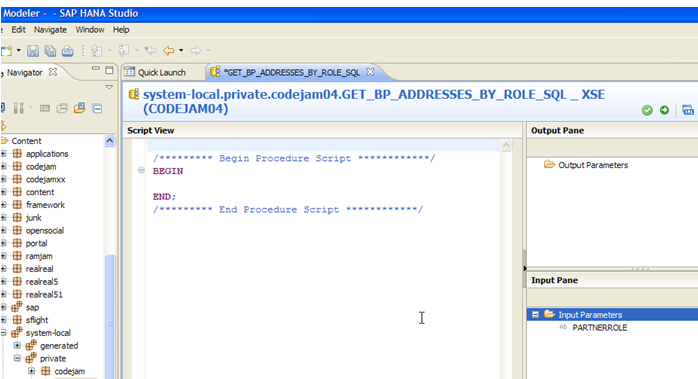 Above was a start from the first SQL Script exercise, developed by Rich Heilman.

Above is the second SQL script exercise.  Can you tell if my script made it error free?

Above shows another SQL script exercise.

I also had time at the end of the day to use BusinessObjects Analysis Office 1.3 against Thomas’s SAP Hana Purchase Orders:

All in all, it was a great time.  I wished I would have spent more time preparing by looking at the SQL Script guide that Craig sent everyone who signed up.

Links provided to us from Craig: 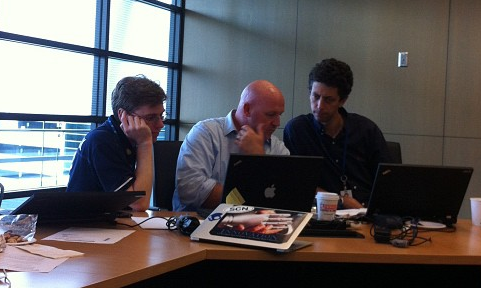 Special thanks to Thomas Jung and Rich Heilman for always being there when we had questions.  I also want to thank Dirk Pluschke (sp?) of SAP IT, who sat next to me and helped me too.

Lastly thanks to Craig for organizing.  He explained that Code Jam is SAP’s way of getting closer to the developers.  It’s FREE and if it’s in your area I encourage you to attend.

If you missed this Code Jam I recommend Rich Heilman’s CD166 session at SAP TechEd.

Thanks for sharing the experience! The code is error free as much as I could see in the screenshot. 🙂

Thanks Kumud - for reading and replying

It wasn't error free the first few times around.  Fortunately both Rich and Thomas were around for expert help.

Tammy, thanks for summarizing this. Unfortunately I couldn't make it because of my travel schedule but looks like it was a great time out there. Need to get to Rich's session before it is sold out 🙂

Thanks Tammy for always ever being our "woman on the spot" hands on, eyes and mind open. Would be great if Craig Cmehil Rich Heilman and Thomas Jung could share more here about the event or prompt some of the participants to do so.

Lots of folks would be very interested in additional summaries and feedback!

Well it was a completely PowerPoint-less day. We did all our demonstrations live in the system or on a white board.  I did record a video of Rich Heilman's introduction to SQLScript demo.  I will get that edited and posted online with a a day or two.

I am glad that I read up on sqlscript,

Thanks for sharing this , it gives us an idea whats in ABAP on HANA going ahead.

Had a question ....what about enhancements to standard SAP code , I had read somewhere you would Have to go all the way and start from scratch and not depend on SAP's FW for the same

For example if SAP has its SD module re written in HANA compatible code , how do you incorporate the requirement to add a field or a validation.

>For example if SAP has its SD module re written in HANA compatible code , how do you incorporate the requirement to add a field or a validation.

HANA Optimizations in the Suite still have to be backward compatible with all existing databases. Therefore there will be branches in the code.  It does mean you might have to enhance both branches or position your enhancement before or after the branch.  Increasingly we will use HANA Native Artifacts, like SQLScript Procedures and HANA Views in ABAP.  These objects don't yet have an enhancement concept, but it is something development is working on for the near future.

Thanks for sharing experience ..

Would you recommend an SAP CodeJam for someone new to SAP?

It depends on what you mean "new to SAP".

I was new to SAP HANA and I did fine, I think.  But fortunately both Rich and Tom were super-patient with me.

Great to hear.  I am currently in a graduate level class on SAP but I also have a decent amount of database and coding experience.  Hopefully, I will do alright.  I decided to sign up.  Thanks for your response.