SAP released the new B2B Add-On package couple of months back and we have some really informative and descriptive articles about the features and configurations. I must admit that SAP has done a really nice job in terms of documentation available with the download and here on SCN.

We got lucky with the timing and got a chance to use this Add-On to achieve encryption while communicating with external vendors. Although the implementation process went pretty well, there were still some learning which I wanted to share through this blog.

Several Encryption algorithms are supported by PGP module. Here is the list: AES_128, AES_192, AES_256, BLOWFISH, CAST5 (default), DES, 3DES. For the Encryption, it is a pre-requisite to have you the keys generated and stored. The guide referred above have links to create the keys as well. I have some observations based on the documentation:

PGP supports three compression alogirthms – ZIP, ZLIB and BZIP2. ZLIB is the default algorithm used if you don’t specify the parameter applyCompression in the module chain. We performed some tests to evaluate these compression algorithms. We encrypted a text file 169 MB in size using PGP modules and here are the results.

In all, I like the PGP adapter module and definitely the fact that it is free. 🙂 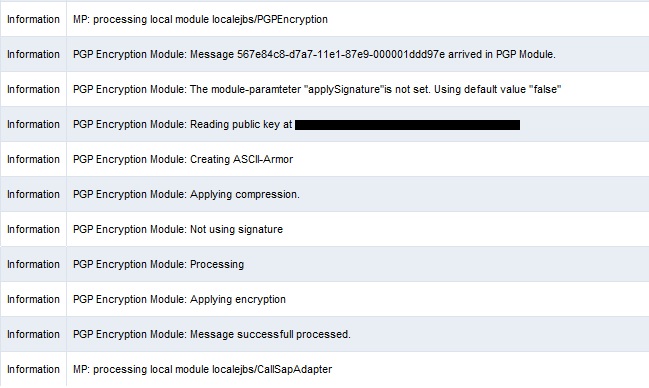 I would like to thank my colleague Jean Patoine who helped me throughout.

A good descriptive blog for PGPEncpytion module. Maybe you could check with the latest SP/patch for PGP module to update this blog accordingly. Also you have not mentioned anything about the PGPDecryption module since the blog heading is about PGP Module itself.

I would like to point out that using the NWA key storage based mechanism to store the PGP related keys is not straight forward and is cumbersome as it uses X.509 certificate and PCKS format.