#PuppetCamp and why I felt like a Luddite – #DevOps Series

In my quest to understand DevOps and how it applies to the SAP world, I attended #PuppetCamp in Dublin on 6th July, I went with an open mind and looking forward to learning about some cool and exciting technology – what I did not expect was to feel like a luddite and be disappointed at the lack of progress many SAP customers have made in cross-pollinating ideas from other IT systems.

I spent most of the morning learning an entirely new taxonomy around the Puppet application, which is an OpenSource tool under the Apache 2.0 software license. This was obviously a steep learning curve, and I will not pretend to have understood all of it. The most eye opening experience for me was at the breaks, talking to the people who are building, configuring and deploying end to end solutions using Puppet as their automation engine. 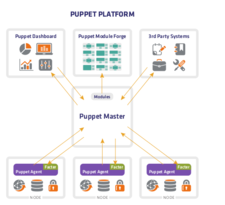 As you can see from above, Puppet uses a master and agents on the individual systems. It can be used to manage the following aspects of the system

Whilst I was at lunch I had the most eye-opening conversation with a systems admin at an e-Commerce firm, this is a paraphrased conversation

Me – ” Actually I am just starting out with Puppet, what are you using it for”

” Well we use it for landscape management of around 400 servers”

“That’s pretty chunky, how many people?”

“Oh yes, we have automated lots of functions, and we’re pretty stable now, but enhancement and improvements”

“There’s only 4 of you, how does that translate into a workload”

“Well we have great monitoring and deployment tools – if we hit an issue on an application server, instead of spending 2 days troubleshooting it, we just run a script and rebuild it with the latest stable build, same thing if we need a new server”

“I like that idea, if we need another application server, we have a lot of hoops to jump through in many places.”

“Well forget that, how long would it take to build once you have the tin?”

“Without change approval, it would take a day or two of a person doing the O/S install up to application level manually”

” No automation, everything is done manually?

“That sucks, as far as I am concerned, my job is to nearly put myself out of a job”

In that single conversation, I realised how far behind the curve many SAP customers are – it was a disappointing realisation.

We exist in the world of Enterprise software, there is a Twitter hashtag #ENSW which many SAP people contribute to, but I have detected an undercurrent of ‘these technologies exist in the Web world which is not really enterprise class or they do not run the business in the way SAP does’. Let me answer that, perhaps perceived, slight – these technologies are used by companies like Google, Amazon, RackSpace, they ARE enterprise class and they do run businesses in flexible/agile ways that SAP landscapes find difficult to match, why that is anyone’s guess.

My challenge to my sapadmin and devops brothers and sisters, at the risk of mixing up my metaphors – lets get outside of our SAP sandbox and cross pollinate from other areas of IT. SAP is evolving into an incredibly open platform which can be extended functionally to enhance business processes – why not administration processes.