Confronting the D Word – What Diversity Means to Me 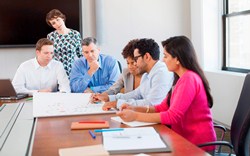 Diversity doesn’t necessarily play well in an atmosphere of public discourse that feeds on polarization. It’s not really an either/or issue. Most people aren’t against diversity, despite the hand-wringing about quotas. Diversity is good. Launching programs that actively support diversity is even better. But behind the applause for admittedly worthy programs, the truth is much more nuanced. Here are a few of my somewhat random, personal musings on diversity.

First, diversity is not just about women. I have been privileged to work with people around the world for many years, long before virtual teams were the norm. Interacting with people from cultures different than my own has been one of the most fascinating and enjoyable aspects of my career. It still is. So part of me rejects any diversity approach that’s purely gender-based. Discrimination typically isn’t confined to just gender. It is all of a piece.

Which is a good segue to my next point. We rarely talk about the elephant in the room, namely, the ingrained attitudes and behavior that prevent women from moving up. This reluctance is understandable. It’s an emotional subject, and the role that feelings play in business is murky at best. If women aren’t going after the positions that will lead to more senior roles, we have to ask why not. Years ago, I remember a public service announcement on television that portrayed a women being interviewed for a job by a man. He began the conversation with oblique hints that the candidate wasn’t right for the job. But the woman wouldn’t take the hint. She kept coming back with the right answers that proved she was qualified. The conversation ping ponged back and forth until the male interviewer, clearly frustrated and angry, blurted out plaintively, “but you’re a woman.” The piece ended with a gravelly male voice-over pronouncing, “THIS is illegal.” I remember thinking how easy it would be to solve the problem if gender bias was that transparent. It is not. It is seamlessly woven into the fabric and minutiae of business life in so many ways.

So how do we transform official policies into a workplace that organically opens up opportunities for the best person for the job? At the risk of stating the obvious, it’s not easy. I’m proud to work for a company whose leadership team has the guts to make diversity a core priority. The findings of a scientific study commissioned by SAP should go a long way in helping all companies address the inequities that hold women back. I also think there are real cultural differences that an expanded study would reveal if it included other places like the United States, Asia, Latin America, and the Middle East. Diversity isn’t just about women. It’s about everyone.