I was once accidentally involved in a small project that required integrating Kenexa recruitment system to SAP ECC(HR) to send users and requisitions(Positions) from SAP into Kenexa system. It was accidental because i got involved as a troubleshooter and ended up redesigning the whole interface. This blog aims to introduce the approach that was taken for the integration.

A brief diagram of the scenario:

Points to note on overall design:

Kenexa offers HR-XML based integration. Note that the messages Users and Requisition do not conform to HR-XML standard. HR-XML uses a specific Enveloper format. Please see the diagram below that indicates the Envelope format. The diagram does not contain all the details and is used to highlight the payload piece only. 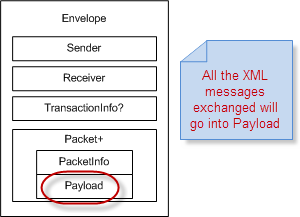 Other points to note:

Note: This blog is based on work that was done a while ago. Some of the details might be missing. If you are in a similar situation and need further info, feel free to post questions. I will try to respond.

I am trying to post request message to kenexa webservice but the rquest is not being processed. We are getting the following error. Is there anything extra needs to be configured in soap adapter or anywhere else?

Procedure or function 'sp__LogMessage' expects parameter '@pi_ClientID', which was not supplied

We are in similar situation and I was wondering if there were any alternate option to connect with Brassring.

We are not using PI and is there any other option to connect with external system like Kenexa Brassring?

You could possibly create a service consumer and use that in the ABAP program. Please see the link http://www.sdn.sap.com/irj/scn/go/portal/prtroot/docs/library/uuid/802edea6-274e-2e10-fd95-e5e1a8bc0892?QuickLink=index&…

Thanks... This can be a good direction for us to look at...