We upgraded one of our customers BuisnessObjects Enterprise systems from 3.1 to 4.0. After the upgrade, they asked me why they cannot create a UNX universe in Information Design Tool on top of Bex Queries. I had to explain them what type of connections they have with BO 4.0 what the advantages and disadvantages are.

So, I decided to share my thoughts with SCN community what I explained to my customer.

With BusinessObjects 4.0, we have 3 different options to connect to Bex queries and create reports on top of that. These are

1. BAPI connection (OLAP Universe UNV) which was the traditional method.

2. Relational Connection through Data Federator which allow BW cubes to be integrated and joined with other SQL like databases (Oracle, MS SQL etc.)

3. BICS connection which SAP has introduce this with BO 4.0 release.

This is the traditional method which we had to use to connect to BW cubes and Bex queries for reporting in Web Intelligence through Unverse Designer in BusinessObjects 3.x systems. This connection is using MDX parser to connect to Bex which is another layer and causing Bex queries to run slower in Web Intelligence then Bex Tools like Bex Analyzer. This connection also does not support hierarchies created in BW side.  RFC executes the standard MDX BAPIs to execute a query. The RFC is called by a Java program using the SAP JAVA connectivity objects. The RFC takes the inputs and executes the query using the MDX BAPIs and gives back the results as a flat table output (unlike OLAP) back to the Java program. The Java program then shows it to the user in Web Intelligence or another client tool.

For most of the people, this was a big problem. I know a lot of people who did not want to use BusinessObjects 3.1 on top of BW just because it did not support hierarchies. This was the only method to connect BusinessObjects to SAP BW. 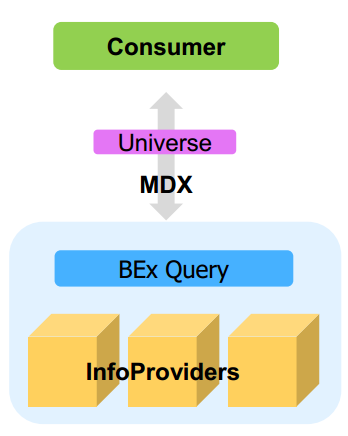 This method was around in BO 3.x solution but Data Federator which was a separate server and sold independently, was needed for this kind of connection. Data Federator allows one to create multi connections to different data sources and use them in the universe. With BO 4.0, Data Federator is embedded inside. This gave Information Design Tool new capabilities such as combining different data sources without creating a data warehouse and reporting on top of it. This way made possible to combine and homogenize BW and SQL type databases like Oracle, MS SQL, MySQL, and etc. Moreover, with DF Jco connection, new dimensions, measures, or filter objects can be created at universe level which OLAP BAPI connection does not allow it.

However, this connection eliminates BW OLAP engine and puts the pressure on BusinessObject Enterprise. Calculations take place in BusinessObjects Data Federator engine instead of BW and causes to run slower than BW especially, if you are trying to join two fact tables (can be two InfoCubes) with millions of data. I can assure you this won’t work at all. Data Federator will crash at some point. Also, this connection type flattens your BW cube which is multi dimensional as a result there will be no hierarchies.

How to create Data Federator Connection through IDT:

This connection should only be used for two reasons I can think of;

1. When BW data to be combined with different kinds of data sources with small amounts like master data tables.

2. As of now, BusinessObjects Explorer still does not support BICS or OLAP universes (UPDATE: BO 4.0 SP6 and above supports OLAP UNV universes) and needs UNX type of universes to connect BW. 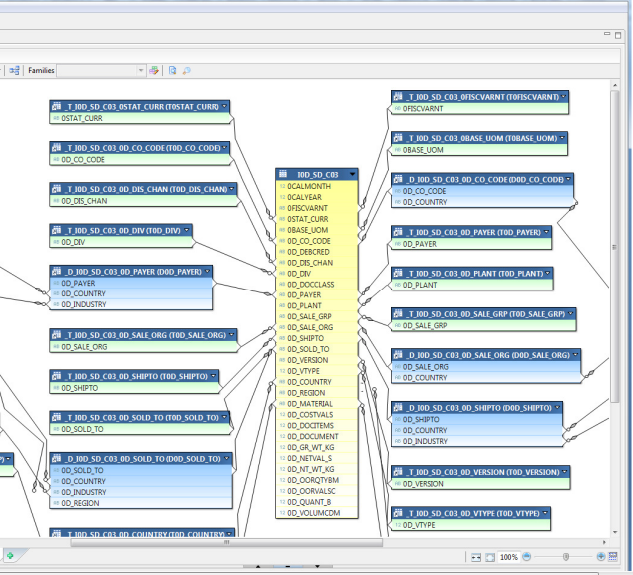 SAP has introduced a new concept to connect BW, BI Consumer Services aka BICS with the release of BO 4.0. SAP recommends you connect BW through this connection. No universe needed for this type of connection to be consumed with. Web Intelligence can connect directly to Bex queries and the universe is created on the fly. Hierarchies are supported with this kind. Instead of connecting through MDX or SQL approach, this is direct client connection which performs better and faster than the other two connections.

This connection had problems when introduced first, but right now with SP4 this is way improved by SAP. Right now, it supports scaling factor, recognizes SUM aggregation type which was returning #UNAVAILABLE for measures when used with WebI variables. Furthermore, BICS is supported in Dashboard Design with SP4. Dashboard Design can directly connect to Bex queries through BICS. With new, components, hierarchical data can be shown on Dashboards. 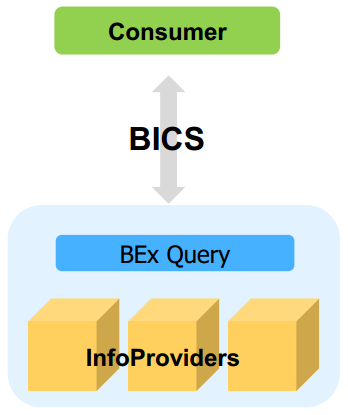 Here is a little table which connection supports which BO tool and the performance.

*  BICS connection is supported only with SP4 release before that is not supported at all.

For more detailed information documents below are a great source.

Best Practices for SAP BusinessObjects 4.0 in combination with SAP NetWeaver by Ingo Hilgefort:

Thanks Zahid for taking the time to share. Nice article.

I'm looking forward to saying goodbye to #UNAVAILABLE in Sp4!

thank you VERY much for writing the blog !

I already had all this information, I guess, because I have read tons of tutorials and User documentation.

But you summarized it very nicely, and that's a very useful blog, I think

Thanks Zahid for this very good synthesis. I'd just like to add a few points about Data Federator / MSU (Multisource Universes) on BW:

- Data Federator will not crash if you try to make huge join. The join algorithms of DF just use disk if there is not enough free memory to make in-memory join. If you have a crash, please open SAP Message.

- Data Federator performance depends more of the query than the data. If for example you access only the fact table (by making technical ID filters on navigational attributes of the cube), DF is the quickest solution when a large volume of data is retrieved.

Here is an extract of BW documentation :

Access using the Data Federator interface is especially suitable for the following scenarios:

You use the SQL connector to the SAP NetWeaver BW system. You have a high level of high performance when reporting on relational data. You only need the objects of the InfoProvider. However you don‘t need any of the objects defined on the level of the BEx query such as calculated or restricted key figures.

I think I wasn't very clear what I was trying to say.

With Data Federator type of connection, it is inevitable to have bottlenecks because all the data you want have to be retrieved from BW to DF server through the network.This will have impact on the performance especially if your report consists of large amount of data. It's possible to push as much as you can from DF to BW to avoid bottlenecks.

If you are trying to avoid bottlenecks, then I think the best solution is BICS connection.

to which server(DEV,QTY,PROD) we hav to be connection while moving unv,conn,report to production ?

This question is Not Answered.(Mark as assumed answered)

I have created the universe by connecing to BW Quality server n move unv,connection to production is it right ?

we have to create every time new connection to all the 3 servers of BW?

give me clear idea please its urgent

ur help will be apreciated You can move the connection from DEV to QA and edit in QA system. Just change the BW server settings in QA system.

If there are no JAVA on our SAP BW system, can we use BICS connection? I can't find any documentation about that.

BICS is implemented with ABAP code on BW side. So yes, you should be able to use BICS even if there is no Java on your BW system.

With BO 4.0 SP4, you don't have to have Java on you BW system. It is very simple to create a BICS connection in BO 4.0 and use it if you follow the instructions.

Thanks Zahid, It is a nicely compiled document with related information attached. It really helps newbie like me.

Nice article.... Thanks preparing and sharing this article with us.

Great article (my latest bookmark) and congrats on your Member of the Month award!

Great doc. Is this outdated at all?

Yea and Explorer still does not support BICS, correct?

As of BI 4.1 SP2 BICS is not being supported by explorer..

The document has been updated.

Kindly help in solving my issue when trying to make an OLAP connection for SAP BW IDES in IDT.

The following are the steps followed in IDT
1. In the Local project created a project
2. Right click and created an OLAP connection
a. Enter the name of connection
b. Select the Driver as SAP>Netweaver BI 7.x>SAP BICS Client
c. Enter IDES BW details
d. Now on the cube selection screen I want to select a specific cube from infoarea.(An error message pops up "Field ICON_TYPE not a member of  RSOBJS_T_NODES_RFC".)

Although I click on finish and test the connection it is successful.

Appreciate If you or any one else have worked with BW 7.0 can help.

Thanks Zahid for a quick comprehensive guide on pros and cons.