On my last afternoon in Belo Horizonte, Brazil, I stopped by Association of Paper, Carton and Recyclable Material Pickers (ASMARE) to see how SAP Social Sabbatical team members were settling in.  They were in fine shape, especially after a surprise guest joined us for a  visit and candid conversation. It was none other than Dona Geralda Marçal, ASMARE founder and CEO.

Dona Geralda has lived a life that few of us could imagine.  She was born into a poor family in Belo Horizonte. She lost her father at the age of 3 and began to work as a catadora – a garbage collector — at the age of 8. By 16, she was living on the streets and had had the first of twelve children. After spending most of her life as a homeless catadora, she keenly remembers the persecution she faced and the inability of some people to distinguish her from the very trash that she collected.

In 1990, Dona Geralda founded ASMARE, the first association made up exclusively of catadores to help them organize to meet their social and economic needs and to push for a waste policy.  Her vision was to organize the workers so that they could effectively influence and develop a municipal policy for waste collection and recycling.

As members, catadores receive technical training and agree to ASMARE’s rules which include no sleeping or separating materials in the street, no alcohol or drugs and no transportation stolen merchandise. They also commit to ensure that their children are in school, to find housing, to help with warehouse cleanup, and to take part in ASMARE meetings.

In return, ASMARE supports its catadores with several benefits, such as legal assistance, medical and dental, life insurance, microcredit for housing construction, and improved salaries and dividends.

Dona Geralda has already replicated her model in approximately 30 Brazilian cities in the state of Minas Gerais and increasingly attracts international acclaim for her work. Her approach is rooted in firsthand knowledge that catadores can find success as people, as entrepreneurs, and as responsible citizens.

With all her achievements, in my view, Dona Gerlda’s most striking quality is her humility. She personifies the concept of “changemaker”.

Know someone like Dona Geralda who is helping emerging entrepreneurs and small businesses grow and thrive in underserved communities?  Nominate them for the The Power of Small: Entrepreneurs Strengthening Local Economies Competition. Four winners will each receive a comprehensive package from SAP – including a cash prize of US $10,000 and a technology donation. The deadline to enter is September 5, 2012. 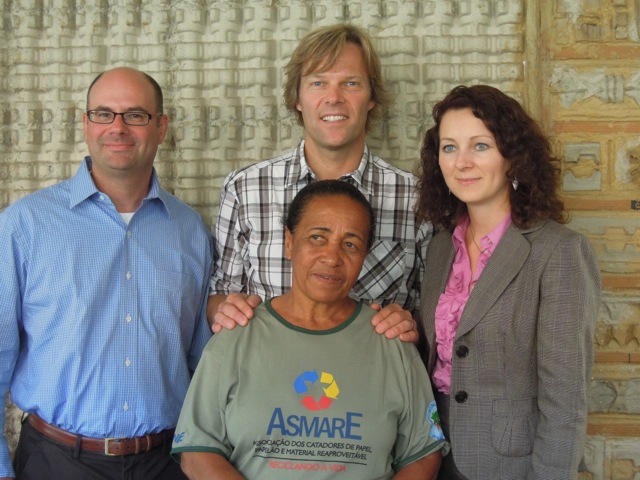