Now that June is over and July is in full-swing, we would like to take a look back at this past month’s news, photos & videos shared on Facebook and share which were the most popular, you know, in case you missed any.

After acquiring Sybase in July of 2010, SAP also acquired the world’s largest data warehouse. In-fact, the warehouse itself contains over 1 petabyte (1,000 terabytes) of data. (Guinness)

As it turns out, the post highlighting SAP’s World record also set a record for the SAP Social Media Team. This is the second most liked & shared post we’ve ever had! 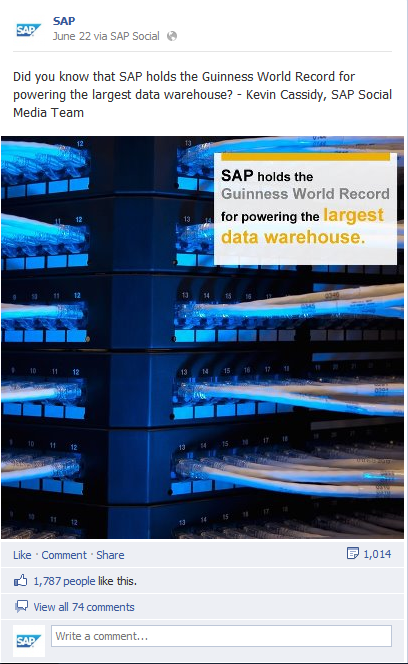 The fact that this post is so high makes me particularly happy for a few reasons: First of all, our loyal SAP fanbase clearly looks on the bright side of life. Rainy days aren’t everyone’s cup of tea, but finding beauty in things like a rainy day is what makes life worth living (especially when that beauty arcs over our North America Corporate Headquarters).

Secondly, this photo was actually submitted by SAP Employee, Hilary Brooks. I especially love it when our own employees can highlight the lighter side of SAP for the world to see as Hilary did here. 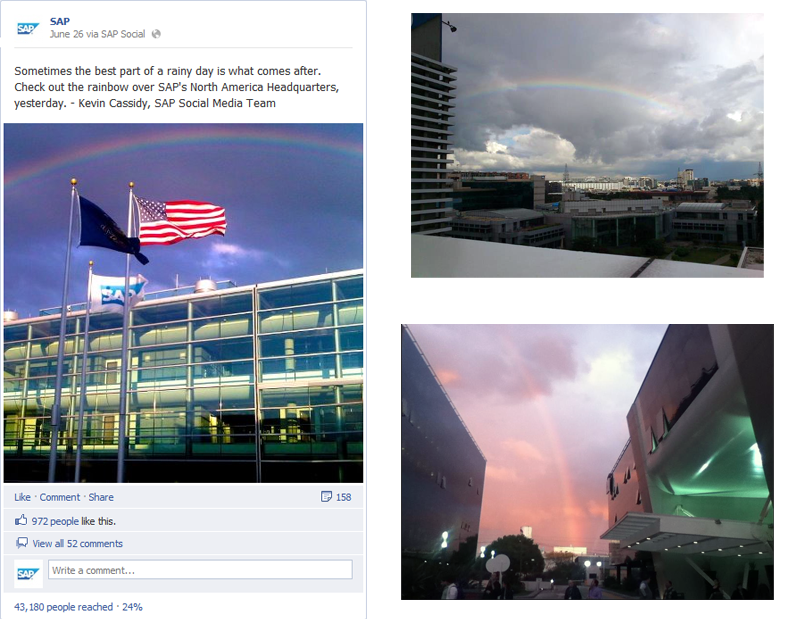 Often times users come to our Facebook page looking for support without realizing that we have a full set of support options ready for them. I’m glad to see this post performed as well as it did, because it should give users a better understanding the various levels of support we provide.

SAP TechEd is an event that always resonates well with our Facebook audience. TechEd has always been less about business & marketing and more about raw technology. You know, geek stuff. I like to think that our Facebook fanbase has a lot in common with the TechEd crowd, so it’s no surprise that they were extra enthusiastic about registration opening for this October’s Las Vegas event.

By the way, you can still register by going here: http://bit.ly/NJZbGR

SAP HANA has been a truly groundbreaking innovation and it’s somewhat hard to believe that it has only been a year since it became generally available across the globe.

This video is a quick breakdown of what exactly SAP HANA is, and why real-time data is so unique. You can run large amounts of data, extremely fast and HANA can be scaled to fit your business. Check out the video below for more:

From here on out, the first week of every month will wrap-up the past month’s most popular posts for you in a blog similar to this one. If you aren’t already a fan of SAP on Facebook, you can click here to “Like” our page. We’ve spent the past two and a half years finding out what content means the most to you, our fans, so you can rest assured that we’re sharing “the good stuff,” on the SAP Facebook Page. Stop in and say hey!