BusinessObjects Analysis Office 1.3: Does it have Report-to-Report Interface? More on BEx Workbook Conversions

Yesterday I showed how to convert a simple BEx 7.0 Analyzer Workbook.  Today I am trying to convert a BEx 3.5 Workbook into Analysis Office 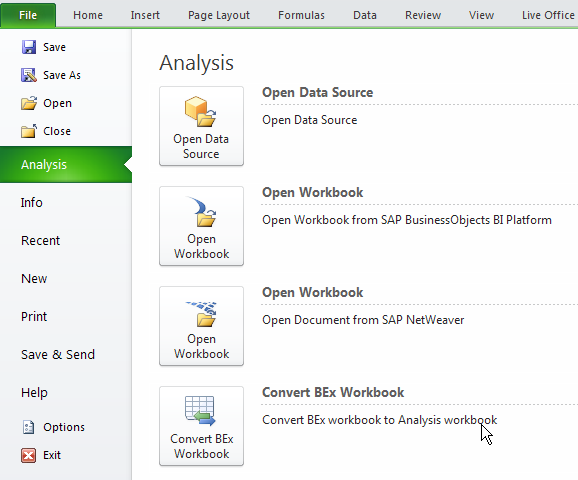 I locate the BEx 3.5 workbook and open as shown in Figure 2

The Report to Report Interface, sometimes called by SAP as “Insight to Action”, was available before in BEx Workbooks and now it is available in Analysis Office.  The typical scenario is to have a summary report and drill into the detail using the report to report interface.

First you have to set this up on the backend of BW using transaction RSBBS (there are plenty of SCN community contributions that already cover the RSBBS steps).

Figure 4 shows the sender receiver set up in RSBBS.

In this example, I will start with a summary report in Analysis Office and drill into the ticket detail: 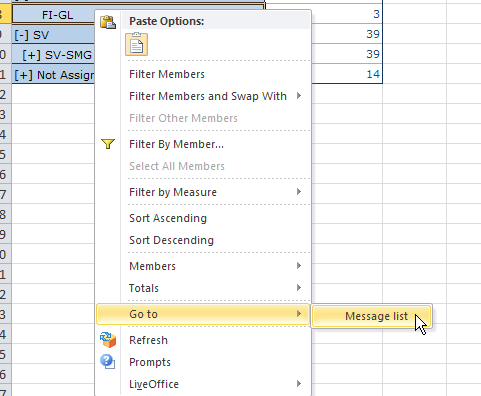 Figure 5 is a summary report of open incidents.  I select right click (context menu) on FI-GL tickets, then Go to Message List (receiver report in Figure 4) 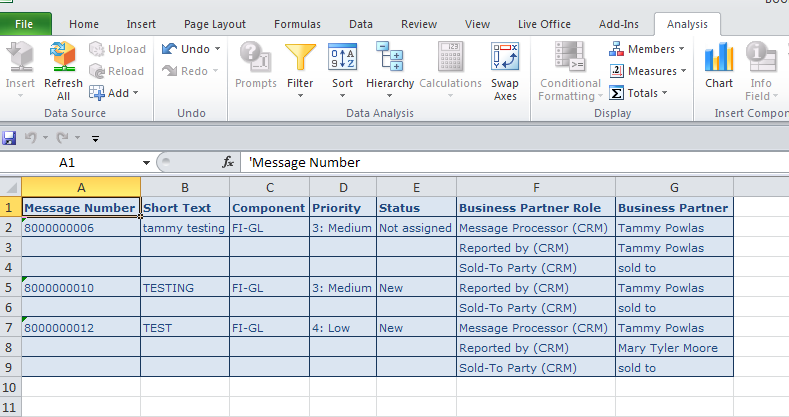 Figure 6 shows the report I jumped to, showing the detail of the FI-GL incident tickets.

Figures 5 and 6 show how the “RRI” interface works in Analysis Office.

There are more features in Analysis Office 1.3 which is in ramp-up covered here.  It will now support HANA hierarchies, prompts and BW 730 workspaces.

I had a question on BEx Analyzer workbook conversion - does it require a specific SP level for the backend? I seem to get this error message when I try converting:

"This function is not supported on the selected system <system name>. A specific SP level is required for the back end"

Thank you for commenting and reading.

Yes it does require a specific SP - please see below

Hi Tammy, I've just tried the same and found your message above! 🙁

Will there be an OSS note to allow us to convert or is it all dependant on us upgrading to the above?

Please see the Q&A from this blog:

So it is dependent on going up a support pack / upgrade; there will not be any downporting.

thanks for the overview!

One question regarding the RSBBS feature in Analysis 1.3:

I am trying to use a sender / receiver assignment which was used with BEx Analyzer 7 in the past. Receiver object is an ABAP Report.

While BEx Analyzer 7 always opens up the SAP GUI when jumping into the RSBBS destination Analysis 1.3 tries to open the SAP Web GUI. Where can I configure the target environment (SAP GUI vs. SAP Web GUI)?

I am not an expert at RSBBS

Would you please post this question in the discussion forum so the community can respond?

Thanks for your inputs on these emerging technologies.

I posted this question couple of days ago, and I was wondering if you came across this issue and have any kind of resolution that you can share. Please let me know if you have any suggestions.

Hi - I have not seen this error.  I know Analysis Office honors the MS Excel version/settings

Did you search OSS?

Thanks for blogs about A-Office.

When you go to target, target report opened they prompt for parameters in background window. (users can't see them).

P.S.> Also we identified some of interesting bugs and miss-functionalities. Open OSS messages about that.

I had a question on Save Analysis to sap netweaver it message:

It message that : This function is not supported on the selected system (SX_BWP). A specific SP level is required for the back end.

Please see this discussion where this has already been asked and answered:

Thank you for reading the blog.

Thanks for you reply,i had upgrad SAP NetWeaver BW 7.02 SP 12 but unfortunately i had not SAVE the Analysis to sap netweaver server ,it message that"Unknown Error - Document could not be saved !!"plz,help me thank a lot! 😥