14 years now, I have seen many different kind of persons try to build a career as ABAP/4 developers. Others managed to find their way and became very good developers and others are still trying without success. But what is the element that is crucial in order to have the ability to build a successful career around ABAP/4 development ? First of all, let’s be honest. You must like what you are doing. Personally I can say that I’m passionate with my job. If you are trying to build a career in SAP just for the money , you will eventually fail. I believe that this rule applies in general, not only for SAP. Especially for the development area, I believe that the business knowledge and understanding is the key that makes the difference between a good and a not so good programmer.For me, it’s not just a document with technical specifications describing what the program that I will develop must do. It’s a bit beyond that. The question that I always do before starting to develop an application is : ” What’s the business requirement/process that the program will support? What do you want to do with the program that you are asking me to create?”. And I always trying to discuss and understand exactly the business need. Knowing the answer to this question will help me build my application based on the business side, not on the technical side. Developing an application based on the business requirement can help you in many different ways :

First of all, you will identify gaps in the logic that most probably the functional consultant that have written the document haven’t identified. Also, you will have the ability to think “outside of the box” and develop your program with a way that can leave spaces for improvement or additions/changes in the future.You will have the ability to work autonomously meaning that when you know and understand the business requirement you can create , test and validate your application in a very high degree without the need of a functional consultant. Finally, you will eventually deliver a complete piece of work knowing that the only possible fault will be minor bugs.

Development as you probably are aware is much more than knowing the statements, the syntax and the way to build an application. It’s about to understand exactly what purpose the application will serve. It’s about to write a code that it’s build on pure and solid logic, not to build a code that does a bunch of things without any reason just to display the desired result.( I have seen that many many times… ). It’s not a problem if you don’t know something. It’s a problem if you cannot or you don’t have the way to find the answer…

This post is more a poll than a regular post.Comments are welcome regarding your opinion..

A former manager (at Ford Motor Company) once said to me that programming is 90% knowing how and 10% sytax.  He said, "If you know how to program, we can teach you the syntax."  HIs view was that most people will never know the HOW.

So, while liking what you do is important to me, too, there's that inescapable observation that most people will never be suited to writing code; the personality and aptitude factors are critical, as is the ability to think analytically (absent in some cases considering some posts on these forums?).

And, yes, I agree...you can be the best ABAP wizard in the world, but that is no substitute for both being a really good ABAP coder and being very knowledgeable about the business's day-to-day practice, e.g., what it is that we do and how we do it. Being able to say, wait a minute, what about this ....? can prevent unnecessary difficulty for the users (and for the business).  Reading the requirements through the filter of understanding what we're trying to accomplish as a business is, IMHO, essential.

Hi Break Point , thanks for your comment. I totally agree. Just wanted to add 2 sayings that an IT manager said to me once and he was totally correct :

" The 90% of the analysis and effort required is the cover the 10% of the business needs."

" When you don't handle something in your code having in mind that this will NEVER happen, is usually happens within the first hour of Go-live"

Both of the above sayings are let's say the story of my life.

You are absolutely correct. It's a really great point!

Ask all functional and business details about requirement before jumping into code and even the design of the program. 50% getting correct requirements, 30% design and 20% coding. If a developer listens function analyst/user without understanding, the requirement/development will never end!

Very good points so far. I would like to add that in my opinion a top ABAP developer with business knowledge should be able to control the urge of building the most sophisticated tool imaginable but rather think in terms of "keep it simple" and reasonable cost/benefit ratios, and also be able to stand up to business departments and functional consultants who want the Rolls Royce type of solution most of the time, where a Volkswagen would suffice.

The latter part requires backing by management, of course.

I agree..  The image bellow describes in the better way what happens in the most of the cases today.. Old image but very very true... !! Yes, I remember seeing this somewhere a while ago...brilliant 😀

The first time I remember seeing this image was about 7-10 year ago.. The think is that even 10 years after, things remain exactly the same...

I think this is my favorite cartoon with respect to the whole rolls royce vs. volkswagon analogy: 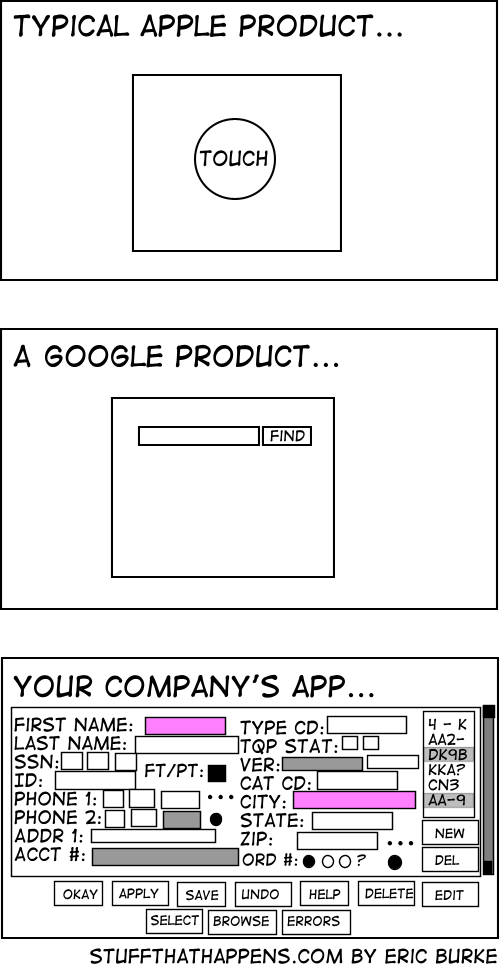 haha, I have that posted on my cube wall!

I would just like to say that in my experince the best thing you can ever do as an ABAP developer is to be out at the "coal face" and see what the users do.

I was in Tasmania once during the go live at one of our quiet Building Products factories there. It had a small office where members of the public could walk off the street and buy things.

When one member of the public did just that, I happend to e the only one around, all the "real" people in the toilet or somewhere. I was suddenly terrified thinking I was going to have to enter their sales order, using software I had written. If that had turned out to be horribly difficult or it fell over, I would only have myself to blame.

Luckily someone cam back just before I had to deal with this, and even better my program worked.

Anyway, in my organisation we get sent to look over peoples shoulders in the plants and call centres and the end users come to head office to ***** about the system. I am part of a delagtion going to one of our quarries in two weeks time for example, not the first time, and it won't be the last.

Because I am sad, once I was sitting in a pub in Bathurst, New South Wales, and I saw one of our trucks go by, and followed it to the nearby concrete plant, to ask the people there what they really thought about our SAP system. Not Too Bad was the result, but you always come away with at least one suggestion for a bug-fix / improvement.

I think this is the same as MacDonalds inisisting all their staff, right up to the CEO, go to one of their stores and make burgers once a year.

If you want to develop good software you have to know what the application will be used for, what business value it shall deliver.