Which SAP NetWeaver releases are compatible with ADT?

Coming back to the compatibility of ADT the most important components are the ABAP language, the ABAP runtime environment and the development infrastructure. ADT requires at least an AS ABAP with SAP Kernel 7.20 and SAP BASIS 7.31 with support package stack 04. This can easily be checked using SAP GUI:

Navigate in the menu to System -> Status and click on the Component Information button: 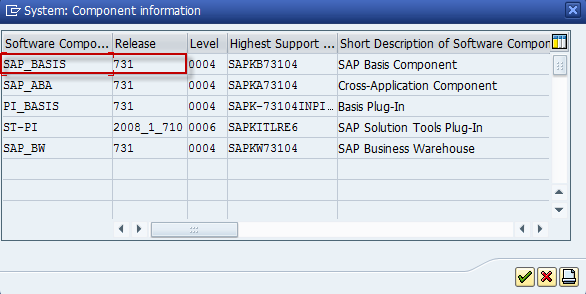 After verifying the SAP BASIS release close this window and hit the Other Kernel Info button: 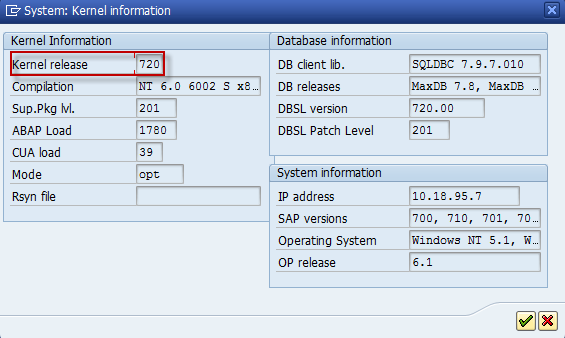 Now, which SAP NetWeaver releases include an AS ABAP containing these component versions? The answer is:

The following SAP NetWeaver releases (onwards) are compatible with ADT:

I hope this clarifies most of the questions regarding the compatibility of ADT.

Can Run ABAP Eclipse with the components below??

Kernel-wise it would be sufficient (720), but you need at least SAP_BASIS 731. So easiest way to try it out is probably the AS ABAP 7.03 SP04 trial (minisap) if this would be an option. This trial version contains SAP_BASIS 731.

Please let me know your thoughts and is there any other way i can create the SAP project in order to work on SAP ABAP code in SAP HANA Studio.

did you check if your development user has the appropriate roles/authorizations? For more details please take a look at this guide: https://scn.sap.com/docs/DOC-40665

Additional info for some of the functions in Eclipse for ABAP:

To use Debugging in Eclipse you need SAP-Kernel 7.21 for Netweaver 7.31.

And for the Transport Organizer to use in Eclipse you should have Netweaver 7.31 SP07 installed.

I still can't understand something... maybe because SAP versioning logic is alien to me.

First, is this true?

Second, if that's true can you shed some light to me about which versions can be equivalent to the ones you reported as compatible?

A very Gud Relaease notes given by you..

We need to download ADT but not sure which version.