The Red Hat Summit and JBoss World is an event you may not consider to be important to a product such as SAP NetWeaver Gateway but if you hear me out I will tell you why it is – or was – this year.

After a decade of cooperation between Red Hat and SAP both companies announced the certification of Red Hat Enterprise Linux 6 for SAP applications at this year’s Red Hat Summit and JBoss World. But that certification was not the only important topic at the event. SAP stressed their intention to offer open interoperability to developers and partners by positioning SAP NetWeaver Gateway.

What does that mean to me as developer/partner? If you are a JBoss developer you can now easily develop applications that access SAP Business Suite data from within your known development environment and a plug-in will help you connecting to the SAP system and finding the relevant services. Even better: All you need to get started with SAP NetWeaver Gateway can be found here and installed for free (trial). 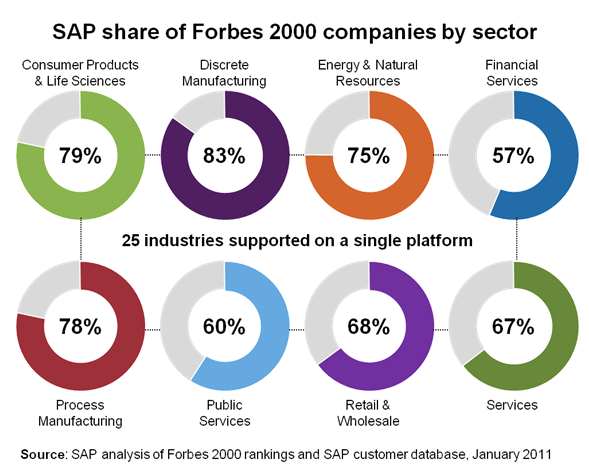 So you are not an SAP developer or partner yet and I hear you asking “Why?”. Well take a look at the picture on the right. SAP gives you access to 25 industries and has a share of over 50 percent in every sector of Forbes 2000 companies.

So if I got you interested in SAP NetWeaver Gateway let me give you a short list of pages you maybe want to visit:

Let me finish my Blog with some additional information and impressions on the Red Hat summit and JBoss World: SAP NetWeaver Gateway’s first appearance at the event was a huge success. In addition to the interest in SAP as such I had the opportunity to talk to many interesting developers and partners with interesting ideas on how to leverage SAP NetWeaver Gateway.

If it comes to the event as such I would like to let you actively participate in some parts of it by offering you a choice of recommended viewings (MP4):

And last but not least, if you wondered about the green monster in the title: Boston is always worth a visit and the convention center is conveniently located in the city center which gave Red Hat the opportunity to invite to an evening event at the famous Fenway Park – a Baseball stadium with 100 years history in 2012. You can see the stadium in the picture below. The Green Wall on the left side is called the Green Monster.