SAP CodeJam Huizen: a win for everybody

Last week, on Friday June 22nd the SAP Codejam Huizen took place. I’ll share my own impressions and lessons learned below. Almost all pictures below are courtesy of Craig Cmehil and Matthias Steiner. More pictures can be found at SAP CodeJam – Fotos | Facebook . For Craig’s own impression, see A win for the Netherlands | Friday Morning Report .

For those who don’t know what Codejam is all about: please read CodeJam, let the coding begin! by Craig Cmehil (the mastermind behind the concept). Then, if you’re still unsure about what this means, listen to the excellent Enterprise Geeks podcast, where Craig explains the idea even better. For me personally it’s all about developers meeting developers.

I know, after the first three cities, Huizen might not be the first one that comes to mind. But SAP Codejam seemed just the type of event that we at NL for Business can accommodate, as opposed to an SAP Inside Track or an Innojam (both of which will by the way take place elsewhere in the Netherlands this year, see below). So that’s why I sent a request to Craig to host one on our premises. And after SAPPHIRENOW in Orlando, which apparently kept everyone at SAP quite busy, we quickly came to an agreement with respect to date, time etc. The message here: this is a local, relatively low-key kind of event and so you, dear reader, can do this too. Just make sure you can assemble some interested people (as few as 10 will do) and send Craig an email. It’s about as easy as that. There really is no excuse 😉 .

Our, or rather, my platform of choice was SAP NetWeaver Cloud. Partly because it wasn’t featured yet on the earlier CodeJam’s, partly because I wanted to know more about it. Furthermore I knew there were several other people in the Netherlands interested in it. This turned out to be a good choice and most of the people I had in mind did indeed show up.

Here is platform evangelist Matthias Steiner at the start of the event: 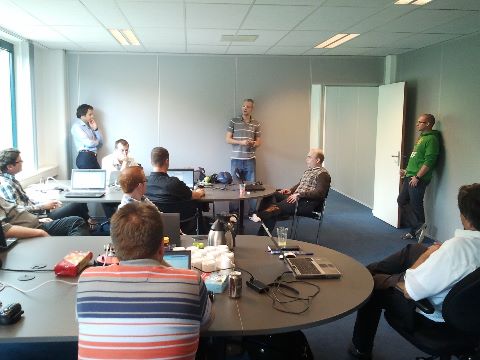 I’m sad to say there are no more pictures available, due to the fact that this is a Cloud platform (but see the coding section below).

The Neo team of experts

SAP really impressed us here by sending their whole SAP NetWeaver Cloud team to Huizen. At least that’s what it looked like. As it turned out the Codejam was not the only item on their agenda, but still, their strong presence made SAP Codejam Huizen very worthwhile to everyone. Thanks a lot guys! We hope you enjoyed the trip and you will consider returning next time. Now for the team members:

Here is Thomas Bieser (the guy in the middle) explaining some things to Jeroen Heijers, while Jan Penninkhof listens in also 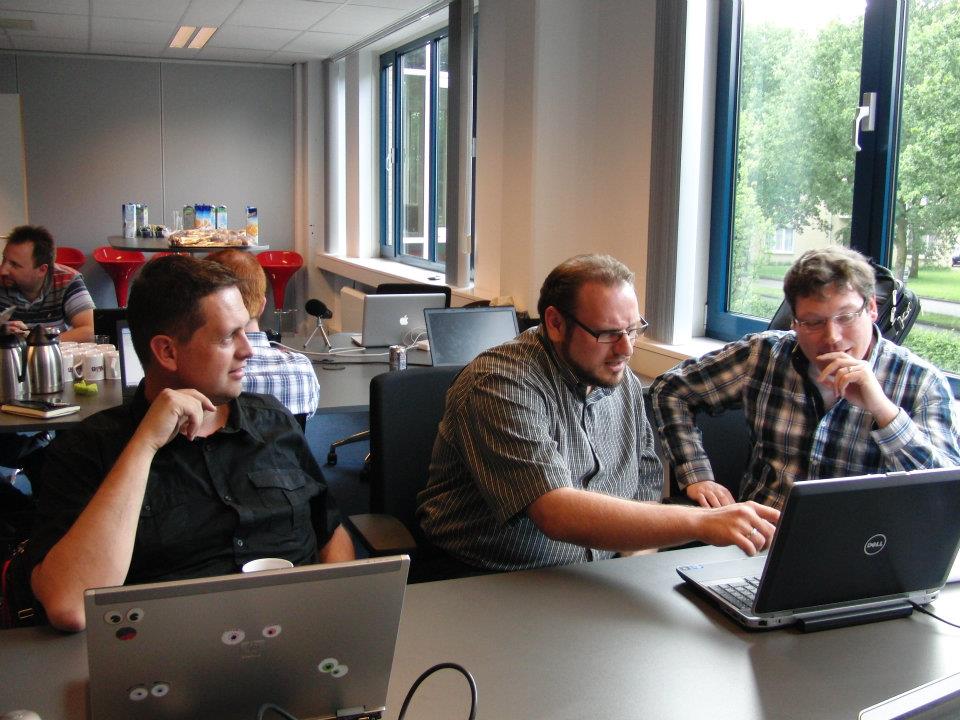 Also present was Peter Peshev , here (on the right) with L. van Hengel 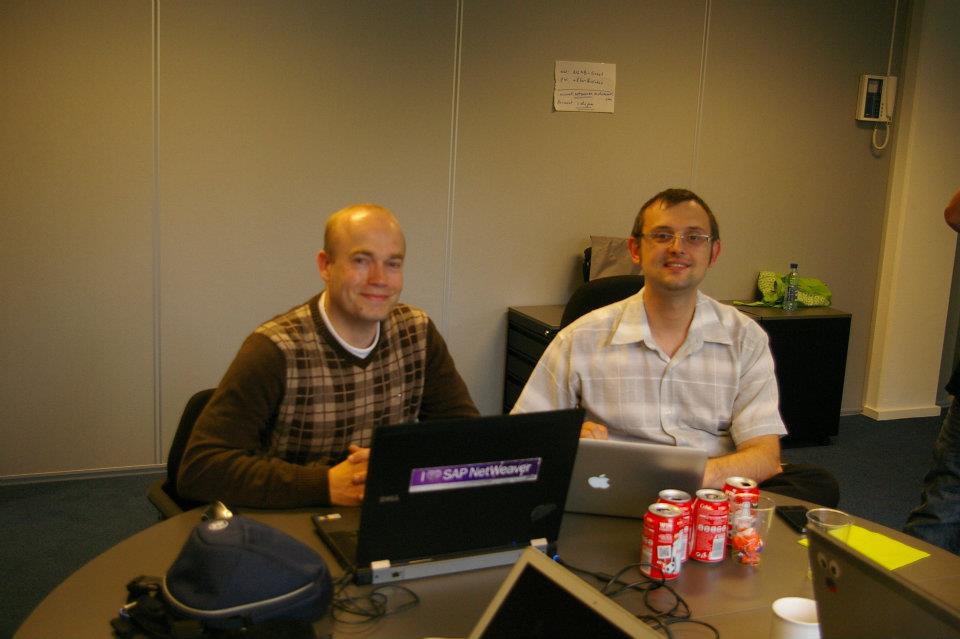 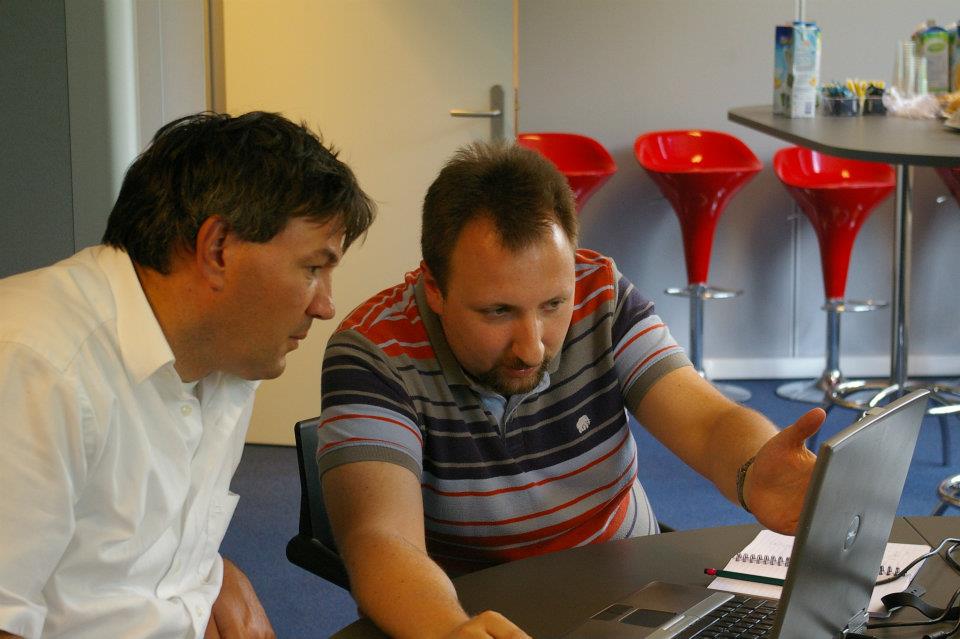 After the wireless, which after an initial hiccup worked alright, this is easily the most important thing a host is responsible for. Although we missed out on beer (no complaints there, at least not from the participants) we did alright in every other respect. In fact, we had way too much food, which really was a shame. So here is one lesson learned: make sure to close registration a few days before the event takes place ánd assess the list of participants: we had for instance registrations from India and Pennsylvania. Needless to say these people never showed up. By the way: thank you Craig for generously paying for food and drinks! For a ‘localhost’ this makes it even easier to sell the event internally. Some pictures to get a taste for what was in store for the participants: 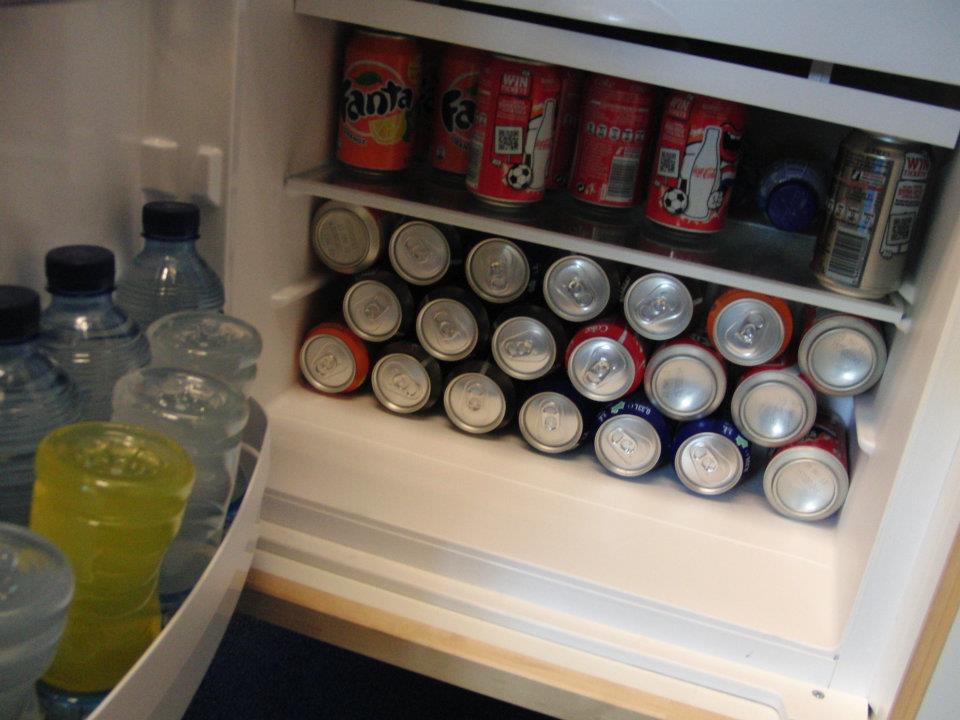 Some of the drinks 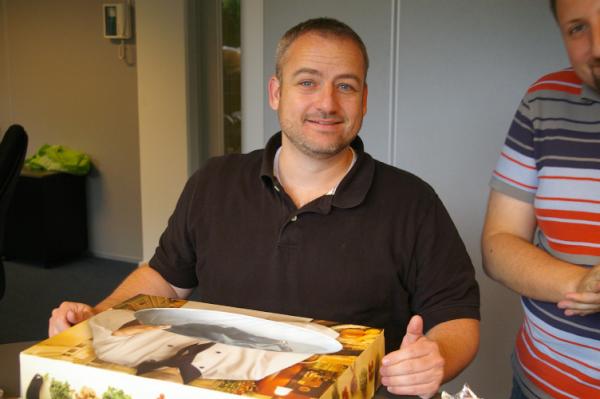 Craig bringing in the 4.00 PM snacks 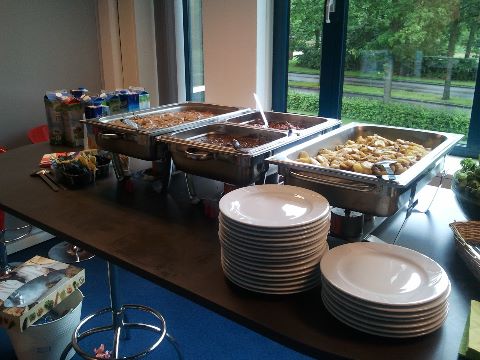 (Part of) dinner. 😯 Indeed, no pizza this time.

We even had a lunch arranged for everyone, but let’s just say the whole building could’ve had lunch…

After all this talk (and pics) you might forget that we were here also to do some coding. But rest assured: we didn’t neglect that aspect. And while I’ve not yet seen an application from Codejam Huizen in the SAP Store, I’m pretty sure most of the participants made progress on the platform during this event, as can be seen from the pictures below: 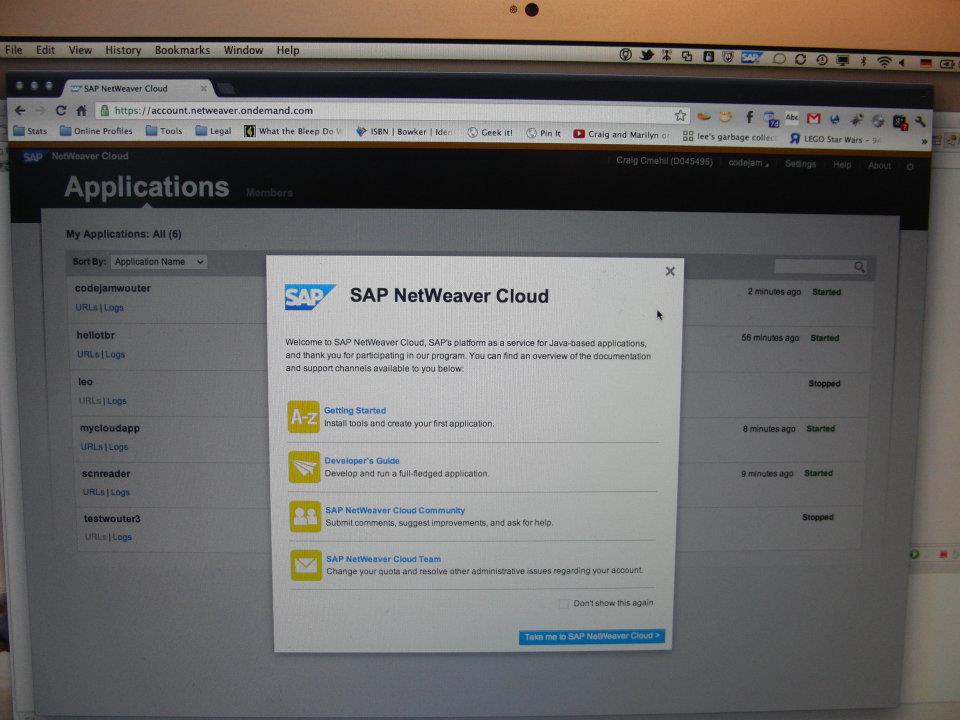 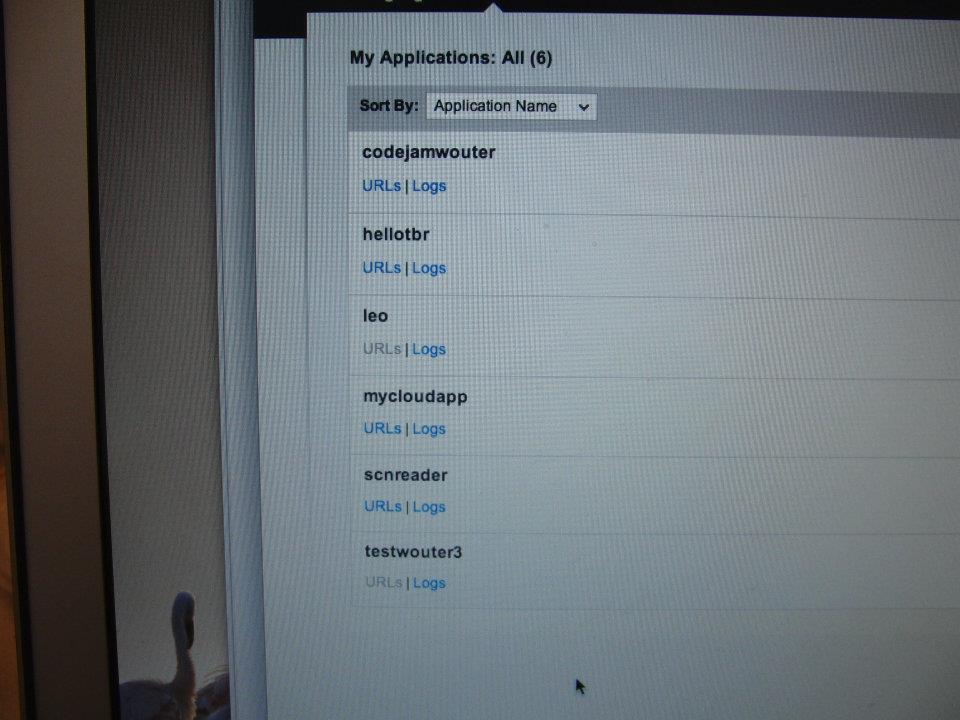 As for myself, I got the tutorial on the Document Service working and the fact that it took me almost all the available time says more about me than about the tutorial, which was excellent. 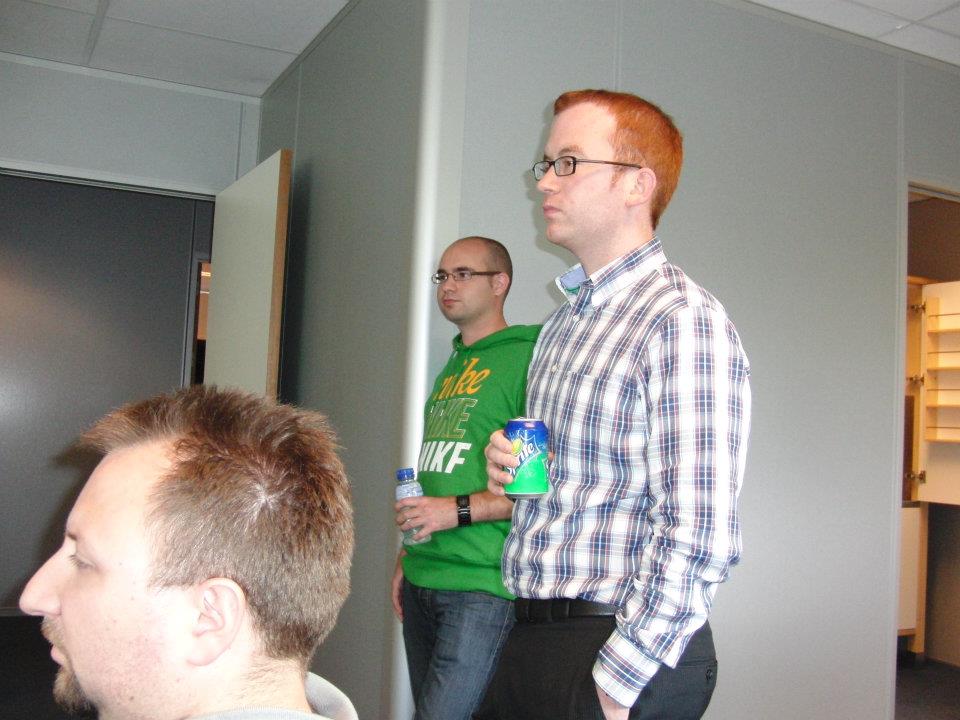 Standing: the Belgian delegation, consisting of Tom Van Doorslaer en Wouter Peeters while listening during the Q&A session led by Matthias Steiner near the end of the event. 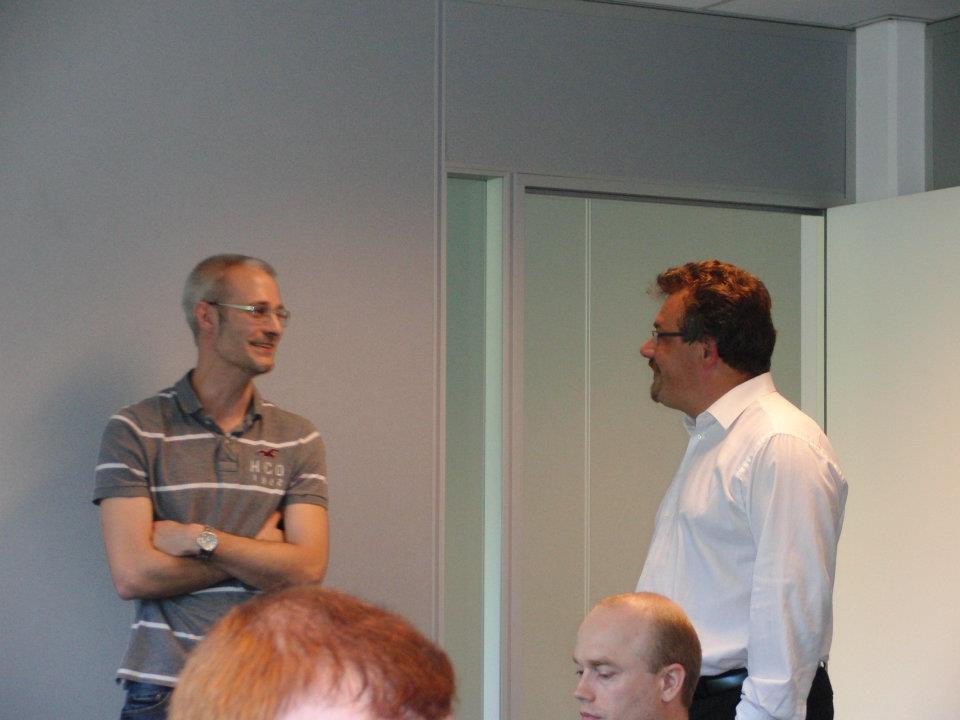 SAP-groupie 😉 and -critic Martijn Linssen (on the right) who normally ‘only’ attends the Dutch SAP Inside Track came along just to meet some old friends, which I think is just awesome. Rumor has it he even did a video with Craig for jd-od.com , but I’ll believe that when I see it… 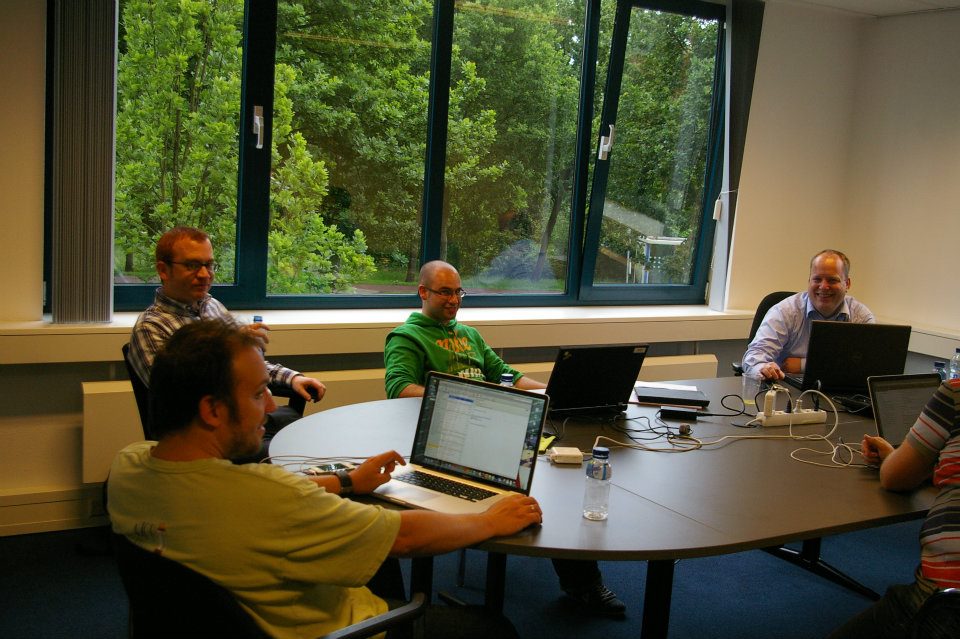 The participants from the ‘back room’, with Robin van het Hof (at the front), our Belgian friends and my colleague Leon Boeijen (on the right).

As is kind of usual after such a first-time event, the praise and compliments were abundant afterwards. Thank you all for that! That said, there’s still room for improvement:

My own opinion: I think it was a typical first time event which I’m sure will get better/smoother with more ‘practice’, but overall I’m fairly satisfied and happy with how things worked out.

Next events in the Netherlands

Of course there are more events planned in the Netherlands: the Dutch SAP Mafia is rapidly establishing a reputation for themselves.

SAP Codejam Huizen was a success, and I want to thank everybody who drove up to Huizen for their presence and participation, as the participants define this kind of event.

I also would like to thank my colleagues Robert Eijpe , Denise Boor, Theo Bolta, Leon Boeijen and Martin Loohuizen for their support before, during and after the event.

I’m sure there will be many more Codejam’s, some of which have already been announced. Be sure to visit or organize a CodeJam near you!

Great blog, Fred, and it was well worth the wait

Again you're the first to respond, setting an example we humans can only hope for 😉

But seriously: it's appreciated!

Very nice write-up Fred with good photos. But would like to know if the learning gained from the event is linked up anywhere or did I miss it 😛 .  It is astounding to see some of the greatest being so actively involved.

Thank you for the nice words Kumud!

The learnings of the event are buried deep in the heads of the participants. With a bit of luck somewhere in their laptops also, and in that case we might see more blogs about SAP NetWeaver Cloud coming out the next months.

But seriously: no, we didn't capture learnings other than by a Q&A session led by Matthias.

Very nice recap of a very nice event Fred. I think you just defined the gold-standard on how to summarize CodeJam events 🙂

For me, when I heard about Craig's plans for CodeJam events I approached him right away telling him we should do one for SAP NetWeaver Cloud. Knowing that we have a stronghold of Java experts in the Netherlands it would have been my first choice - a few days later Craig told me you'd suggested one, which put a huge smile on my face 😀

There's only a few things I can add as you said it all in your blog post, so the following comments are just for the record:

SAP really impressed us here by sending their whole SAP NetWeaver Cloud team to Huizen. At least that’s what it looked like. As it turned out the Codejam was not the only item on their agenda, but still, their strong presence made SAP Codejam Huizen very worthwhile to everyone

All true, yet the trigger for the trip was SAP CodeJam. It didn't take much of arguing at all to get Peter, Krassi and Thomas on board. They all jumped on the chance to get to mingle with our community in the Netherlands. From there, it just seemed the most natural thing to do to extend the field trip and get to spend some time with some of the people in our BETA program and the Customer Engagement Initiative. 😉

I’m sad to say there are no more pictures available, due to the fact that this is a Cloud platform (but see the coding section below).

Not sure I understand that sentence, as you feat. plenty of pictures in the post and there's a whole lot more on Facebook (which you linked to.) Can you clarify that statement please?

SAP-groupie 😉 and -critic Martijn Linssen (on the right) who normally 'only' attends the Dutch SAP Inside Track came along just to meet some old friends,

Martijn surely is a character and while he never holds back with critique he sure is nothing but praise for SAP's accomplishment having established a friendly and lively community. I think him coming by to the event speaks volumes in this regards.

Last, but not least I want to thank you and your colleagues at NL4B for being such great hosts. Looking forward to the next event!

PS: if you could add a 'sapnwcloud' tag to your post it would show up in our blog feed in the dev center.

Thanks for the kind words and the nice additions Matthias! Totally agree w.r.t. Martijn!

About the 'no more pictures' thing, it was just meant as a (lame) joke (can't take pictures of something you can't see/touch).

I'll add the tag (it wasn't suggested to me AFAIK, no excuse of course 😉 )

Great recap of the event Fred! Very well structured and detail-rich, similarly to the event itself 🙂 .

One open point caught my attention:

We should get more participants, and ideally more non-SAP Java-developers also, which IMO will make for a better mix. I’m not sure though how to reach out to the non-SAP Java community. Any help will be very much appreciated.

I'm joining a number of external Java-related events, like JavaOne, Devoxx, JAX, etc. A very prominent way to catch the attention of the non-SAP Java community in the area is to get involved with the local Java User Groups (JUGs) in the region.

I've done a quick search on the JUG catalog on http://home.java.net/jugs/java-user-groups. Although non-exhaustive - it shows already some potential starting points.

What I was able to find for the NL area the following groups:

It'll be great to involve with the guys and try to get them on the next CodeJam in NL. 😉

Thanks for the digging Krasimir! That really helps. I'll try to get in contact with those user-groups.