How to get a Mobile Gold Medal at the Olympics

We are now only a month away from London becoming the Center of the Mobile Working World as a by-product of hosting the London 2012 Olympics. Events will be held at various locations around London and the South East. Seems a strange statement to make?.. Lets break it down!

With any Olympics comes a massive strain on Infrastructures such as transport and the City of London Corporation has, for the last 6 months, been mailing companies in the City to suggest that they think of and put in place ways of relieving that strain on the capital. Though not causing any change in its companies productivity and processes is a major concern, especially with the current economic climate.

So what has been the result? Some companies have rented office space outside of the capital . I will award them the Bronze Medal. Some companies have asked workers to work from home offices. I will award them the Silver Medal. Sadly for some, it will be business as usual at the same location, struggling with crowds etc. They are just out of the Medal Positions! The lucky winners that will be getting awarded the Gold are those Information workers that work for the visionary companies that have empowered them to work remotely or specifically Mobile! A new Mobile Olympics Medal. These guys can still be as mobile, anywhere they want… With information at their fingertips anytime and in innovative Mobile Apps on small but powerful devices, such as a Tablet. 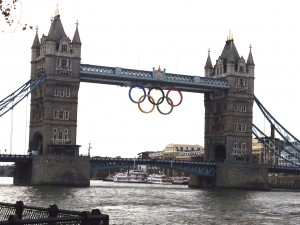 As I have said in previous articles, Networks are the life blood of Mobility, though they are not ubiquitous and can be easily overloaded. So it is great to see companies such as Virgin Media, working with partner Transport for London – TfL, stepping up and placing free wifi on 80 of the London Underground Stations during the Olympics, that they will then rent out to other companies after the games and the free period has ended. Check out other stories here and here.

It is worth me mentioning that if your not a seasoned traveler on the London Underground think of getting yourself a Mobile App such as – ‘Tube Deluxe‘, that gives you many features, such as planning your journey, travel times and any travel advisories. There are others available as well.

On the sporting side for those attending, bring your Mobile Devices armed with the Official London 2012 Companion Mobile app in your hand, that can be found on the App Store. This will give you News, Maps for Travel & Games Locations, Personal Schedule Planning, Augmented Reality. Check it out here.

Mobile Worker to triumph during London 2012!!!