Lori Williams, SAP, spoke at SAP Inside Track New York the other week.  You can watch the recording of this at https://sap.na.pgiconnect.com/p84072604/ with thanks to Marilyn Pratt Lori provided an overview shown in Figure 1.  She said the SAP Mentor landscape has been helpful.  The magic is how you write the test for certification.

SAP is a software organization using certification to give you a measurable  results to show that you know something and know how to do something.

Lori said it used to be very task oriented and that now it is more business process focused.

She said they are looking for role-based versus task based

Figure 2 asks “Who should be certified?” and describes the various roles. Lori said that in North America 64% of the courses are done virtually.

Note the bottom of Figure 3 for what purpose certification serves. 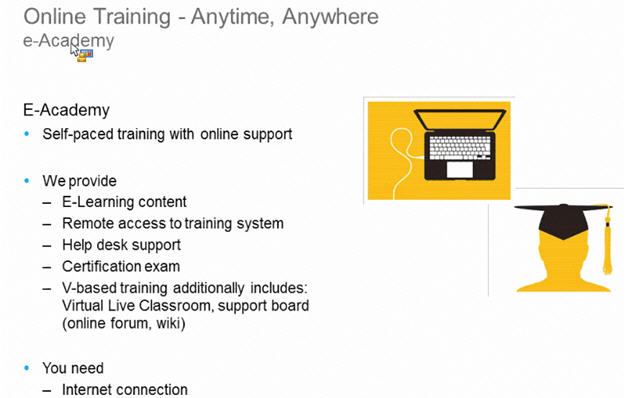 Lori said the e-academy (something I was not aware of) offers e-learning over a period of time.

The attendee has access to a training server and has the ability to call a SME or “phone a friend” for help. Figure 5 shows the goals and objectives of the SAP Certification Influence Council, of which SAP Mentors Jon Reed and Martin Gillet participate.  It includes all regions, with both customers and partners represented. 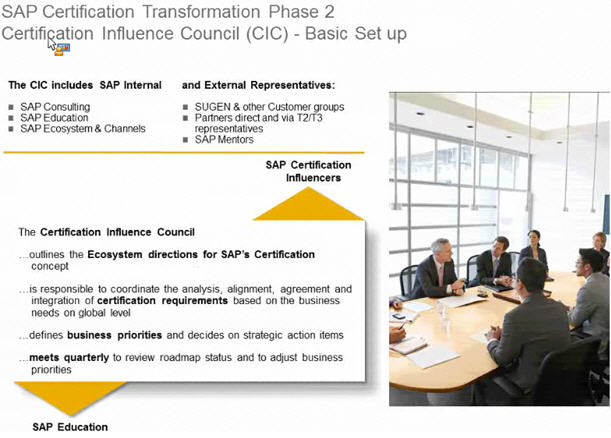 Lori said the council meets quarterly and you can see the composition of participants includes SAP, SUGEN, SAP Mentors and others. 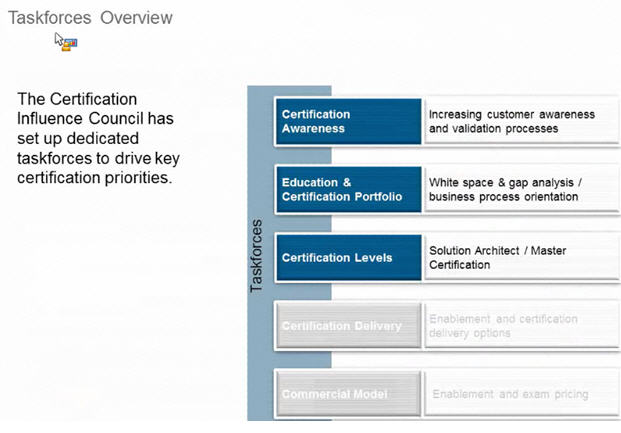 Figure 7 shows the task forces of the Certification Influence Council 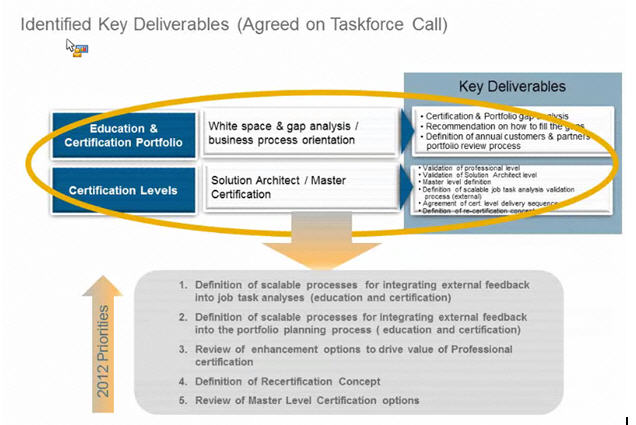 Figure 8 shows the 2012 priorities of the certification influence council.  Lori said the job task analysis needs to be extensive.  She said the recertification concept is still being fleshed out and worked.  Their goal is to review the master level certification options by end of 2012.

Figure 9 shows future highlights.  Lori said they would like to form a community for those who hold certification and have a plan for re-certification

My thanks to Lori Williams and Diane Bradley of SAP Education for supporting SAP Inside Track New York.

Thanks for  capturing this info - I was on the SAP Inside Track NYC (live-streaming) but also working my day job, so I missed this session.  And Bravo to you and Marilyn for getting

Lori Williams as a speaker at that event.

I think Certification will continue to be a hot-button issue - the debate over certification .vs. 'real-life experience' will never go away.  But it's encouraging to know that SAP Education has heard the voices that speak so passionately on this topic (Jon Reed, Dennis Howlett, Leonardo Arujo, Martin Gillet, and Michael Koch, among others).

And congrats on a very interesting - and successful - Inside Track!
Sue

Thanks for this, Tammy.

1) Lori mentioned that certification is becoming more  business process focused. An issue I have, as a BASIS / Technical Consultant person, is that some days the purely SAP part of my role is very small - Yesterday's example was the relative safety of NFS mounting the transport directory across Solaris clusters.

2) Lori also said SAP are looking to make certification more role-based versus task based; An issue that I've seen in Australia, certainly amongst BASIS / Technical Consultants, is increased specialisation, so we have Solution Manager, Security, PI, Portal etc roles being performed by individual people - the generalist is being ignored. This may be specific to the BASIS / Technical Consultants, it may be specific to Australia (it could even be specific to my experience), but it reduces the incentive for the individual to become a generalist. Not necessarily good (or bad) on it's own, but it increases the cost of SAP to the customer, by requiring extra staff (full time or part time) or reducing the efficiency of their SAP system (and therefore their business).

these are both vey good points.  It is absolutely correct what Lori stated that the certification exams are becoming more business process oriented based on feedback from customers - especially from the Certification and Enablement Influence Council task forces - that there is a desire on the customer side to see more validation of business process orientation and broader integration knowledge. That is why we have enhanced many of the exam questions over the last three years to include business scenarios, etc. to take that into consideration and make the certification more relevant. This is certainly not the case to the same degree in all areas. The job task analysis process  - which includes thorough evaluation by real practitioners - is the true reality check at the end of the day - and the outcome of that defines the balance between specialist and generalist. Your argument on the cost to the customer is without doubt a very valid one so most of the time we try to strike a delicate balance between the skills profile in the market and the "ideal" profile of a customer requirement. These profiles evolve with time as well. Does that make sense ?

Thanks for the response, Sue,

Your answer does make sense; I guess one question is whether it is even possible to strike the balance 😆

As someone who has seen, even if not worked in, a lot of different SAP sites and environments, I know of places where specialisation to the degree I mentioned is required, because of Governance issues or the sheer size of the environment, but I've also seen SAP sites where the entire "IT Department" (operations, outsourcing of development, vendor management etc) is "just another" task performed by the company accountant / financial controller.

I don't envy you your job (and that's apart from dealing with grumps like me who want all things certification fixed yesterday !!)

yes it's definitely a challenge. But the more feedback we can get on the profiles the better we will be. I hear Tom Cenen's update to the Mentors on the CEIC Meeting couldn't take place due to technical challenges at the last Mentor Monday but one of the actions planned for Q3/4 is a landing page where members of the community  can give us feedback on job task profiles so that we will get nearer to the goal. As you say it will never be 100% - just as every SAP customer is different - so is every person working with it in terms of focus, etc.