How This School District Turned its Students’ Love of Mobile into Better Learning, Test Scores

Teenagers. They may forget your request to mow the lawn, fill up the gas and clean their rooms, but they’ll never fail to bring their smartphone or tablet when they go out of the house.

Indeed, teens would be the dream demographic for an organizational Bring Your Own Device policy – they use them constantly, they could train your IT staff on the latest devices, etc. – apart from the inconvenient fact that you don’t really need an iPhone to man the french fry station at Jack in the Box.

But schools, that’s a whole different ball of wax. Katy Independent School District in Texas figured out how to leverage BYOD with its students, turning what had once been a classroom disruptor into a learning tool – and better test scores.

“People  were already trying to hide what they were doing on their smartphone  because it was illegal by the school rules. So by opening it up, we got a  lot more freedom and things moved a lot faster,” said one student in this Cisco video about Katy’s deployment.

But I’m jumping ahead of myself. The Katy district started small and traditional in the fall of 2009: 125 HTC smartphones deployed to 5th graders at one school.

Giving 12-year-olds their own smartphones to use during class would seem to be a recipe for disaster. But Katy did two smart things: it turned off the calling and texting features, and it renamed the phones “mobile learning devices,” or MLDs.

It may seem like a crude tactic, ala “These are NOT the Droids you’re looking for,” but it was just as effective as a Jedi Mind Trick. According to teachers, students took to doing Internet searches and using apps with gusto to help them work collaboratively and finish assignments.

“The biggest thing for me was the engagement,” said one teacher, Leona Bernard, in the video. “It was instant. We were  learning figurative language and looking up lyrics from music and they  became totally interested in words. They were really truly pulled into  the learning.” 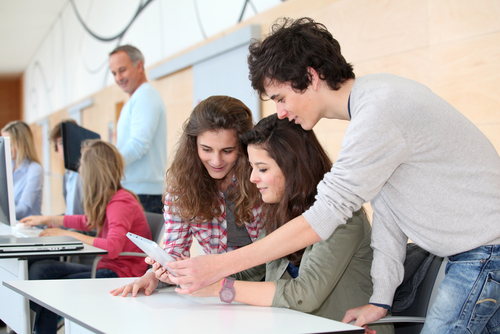 According to a separate Cisco case study, Bernard’s students used an Android app, Color Notes, write down their impressions of books or post reactions on the interactive blog she started. Students in other classes created “prezis” or interactive presentations instead of the regular old term paper on Microsoft Word. Still others charted the stars using their smartphones.

“We didn’t try to force it down anyone’s throat. Instead, we started building great success stories about teachers, and recruited them as leaders of the Web 2.0 movement,” said Lenny Schad, Katy CIO.

In its third year starting in fall 2011, Schad’s team upgraded the core campus networks at a number of schools to 1- to 10-Gigabit Ethernet. That gave Schad the confidence he could implement a BYOD policy to his middle and high schools.

Leveraging the iPads, Droids and iTouches that most kids already had, BYOD is bringing learning to the 21st century and giving kids a preview of how their future workplaces will operate. It’s helped reduce competition for scarce PC computer labs. And, last but not least, it’s boosted test scores significantly. From the case study:

In some instances performance on math tests increased from the 70th to 90th percentile, with similar results posted in all subject areas. “There wasn’t one teacher who didn’t see improvements in engagement and test scores,” Schad says. “We heard so many testimonials from teachers who said, ‘I’ve been teaching for 20 years, and I’ve never seen anything like this.’ The creativity these tools allowed was just amazing. Plus, the MLDs really reinforced the notion of differentiated learning: By giving students the option of using pencil, paper, podcasts and so forth, we were allowing them to tap into their individual learning preferences.”

Of course, BYOD creates the potential for some students to be left out, either because they’ve forgotten their devices, they’re being punished by their parents by having them taken away, or they simply can’t afford them. However, teachers repeat stories of students generously sharing their devices with those lacking them. Katy is also augmenting this by asking for donations of used smartphones it can offer to those caught on the wrong side of the digital divide.

Today, more than 80 teachers in the district are using MLDs as an integral part of their classroom instruction. For next year, the plan is for 35 Katy elementary schools to be using MLDs.

“It’s really cool to see the kids light up now. Learning has actually become fun.” says a high school teacher, Kay Fenn. “Our kids are plugged in 24/7. If we’re going to engage with them, we need to be there, too.”