Microsoft’s Surface Tablets won’t join the Zune in the Redmond Hardware Deadpool anytime soon for the simple reason that won’t be released until the kids are already back in school.

Is this just delaying the inevitable? Or will the Surface absorb all of the summer heat and propel itself to Xbox-like heights?

I thought I’d consider that simile with another, by comparing the Surface with the most notable tablet failure to date, the Cisco Cius.

As much as Cisco tried to avoid a specs war with other vendors, the perception was that the Cisco Cius was an underpowered, over-priced Android tablet.

Sure, Cisco offered some IT-friendly features such as a proprietary enterprise app store and high-end video and networking features (though they came at an additional price).

The problem was that the market for tablets then, and even today, primarily remains driven by consumers and enterprise workers buying to BYOD.

Microsoft is doing some things better with the Surface:

– Unlike the bland Cius, the Surface is a striking piece of hardware. It won’t be to every consumer’s taste, but the Surface should genuinely appeal to a good chunk of consumers. That’s key in the BYOD era.

– Microsoft won’t use the words, but the Surface is essentially a tablet/PC hybrid, or what others called aconvertible laptop (albeit a very skinny one). Convertibles and hybrids have never done particularly well, only appealing to a few niches. So it’s wise that Microsoft is avoiding tho terms ‘hybrid’ and ‘convertible’.

Still, I don’t think it matters much. Pundit types like myself may have long memories, but consumers won’t remember or care. The Surface is thin and attractive enough that people will automatically compare it other tablets (which is a good thing), while adding in its Windows smarts (mostly a positive, due to the application selection that entails). Call it a Tablet Plus?

– At least one of the Surface tablets, the ARM version running Windows RT, will likely be competitive price-wise with other ARM tablets. By that, I expect Surface RT to start at $500, not the $200 of Amazon’s Kindle Fire.

– The Windows 8 Professional version of the Surface will run a fairly-fast Intel Core i5 quad-core CPU, not the under-powered Atom chip that helped doom the Cius as well as netbooks.

But in other ways, the Surface uncomfortably repeats the problems that the Cius as well as other tablets like the Motorola Xoom, BlackBerry PlayBook and Samsung Galaxy Tab have had:

– The less-expensive Windows RT tablet will have a very sparse selection of apps upon release, due to itslack of backward compatibility with current Windows apps. A dearth of apps is the problem that faced the BlackBerry PlayBook when it launched. That did not go well. 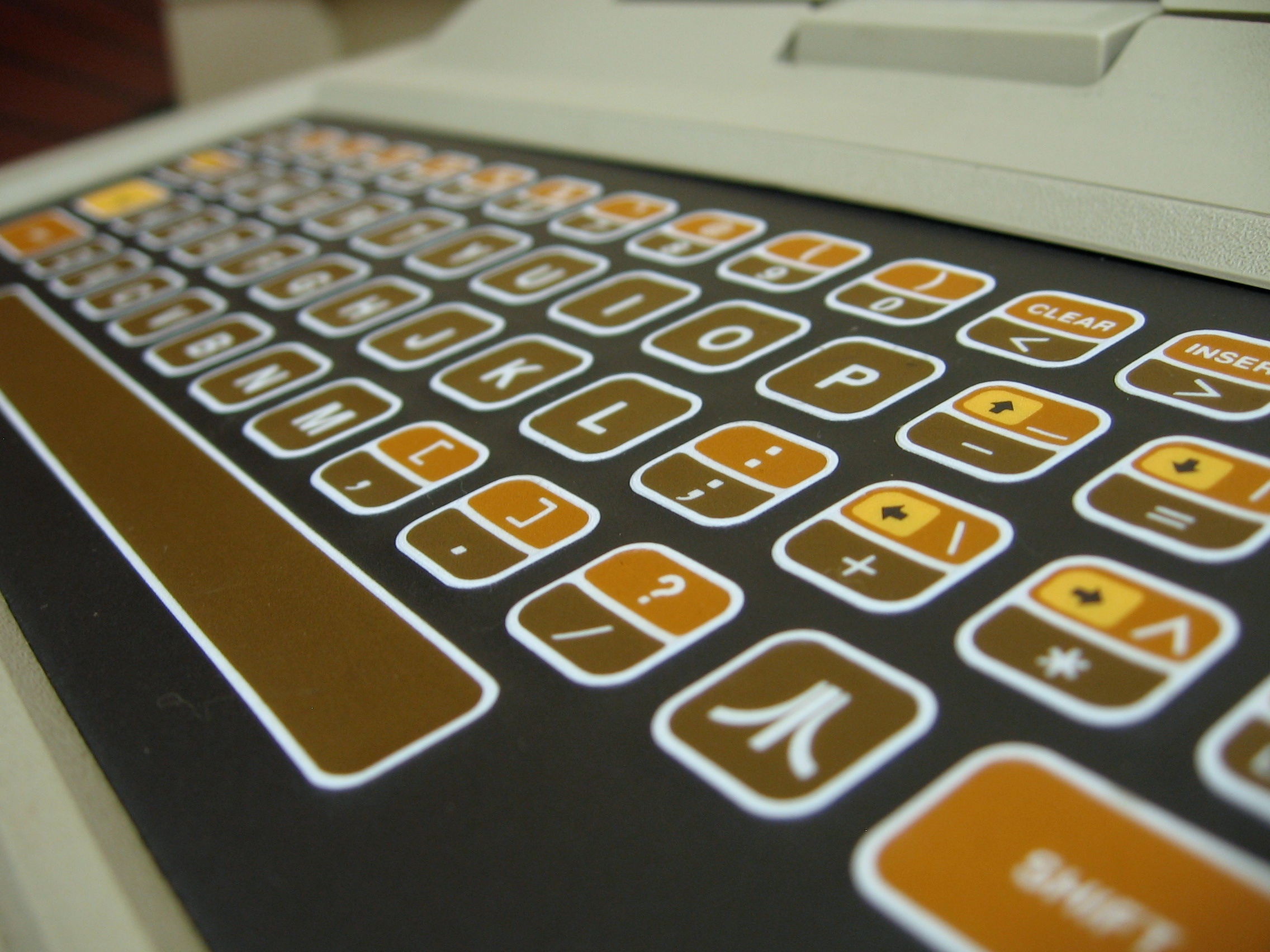 Granted, this was 30+ years ago. But Moore’s Law doesn’t apply to keyboards. Change is slow. There have only been two innovations in the last two decades worth speaking of: backlit, island-style keyboards, and wireless connectivity.

The Surface keyboard doesn’t incorporate either of those. The best case scenario is if the Surface’s keyboard works as well as the best spill-proof, silicone keyboard. But few touch typists will consider that much of an upgrade over touchscreen keyboards.

– The Surface shows that Microsoft, when it adopts Apple’s vertically-integrated manufacturing model, can make snazzy, high-quality hardware, too. The problem is that it runs the risk of angering Microsoft’s hardware OEM partners, such as HTC, HP, Lenovo, Dell, Asus, and many many others.

This uncomfortable state of co-optition didn’t exist when Microsoft launched the XBox. The only partner whose turf it invaded was Sony.

But doesn’t Google face the same problem? Yes and no. While Google’s Nexus tablet will annoy its partners, Google doesn’t make any money directly from Android. So there aren’t billions in licensing revenue at stake.

In the end, I remain unsure whether the Surface will end up more like the XBox or the Zune. What say you?

First, what's with the name? "Surface"? Really? That made sense when it was a coffee table. It doesn't make sense, at least to me, as a tablet.

I also think the two versions is going to be a problem. The "real" tablet device is the ARM-based RT version, but I think the other will be the most popular because it runs everything people currently run on their desktop/laptop. It will be seen as the "safe" version. But people will mostly end up using it just as they currently use their laptop. It won't be a major target for app developers, and most will run vanilla Windows apps (read MS Office). And this will tarnish the image of the "proper" RT version and both will fail. If they'd only released the RT version, it might have been more successful on its own?

That's my gut reaction. Maybe after a little more time to think it through I'll come to a different conclusion. Maybe. I hope I'm wrong. The iPad needs a strong competitor and a Windows tablet could have been it. I've used a Windows Phone and liked it a lot.

Agree that having even two versions of Surface tablet comes off less as clever MBA-style market segmentation and more potentially confusing for consumers. In this era of overwhelming choice, you need to hide complexity from potential customers.

The W8 Pro surface could be a smart move. There's a i5 inside that tablet and a real OS. If it can run 'real' applications it could be an alternative to an ultrabook.

I can use it at home plugging in an external monitor, keyboard and storage drive (hoping to have an HDMI and some USB's). If I travel it becomes a tablet, with a plus of an integrated keyboard (no accessories to bring).

If it runs the proper W8 it can be a good all-rounder, if you don't want to have a laptop and a tablet. And if you use you home PC just for browsing the internet and basic spreadsheet etc.

The problem with the Intel tablet is that it looks like it will have a premium price tag. It will sell to people who might have otherwise bought an ultrabook. That's not a consumer device, it is an enterprise device. Calling the OS on that device "Windows 8 Pro" is a big hint. And if it doesn't sell in consumer numbers nobody will be interested in developing apps for it. And that makes it a laptop with a detachable keyboard, not a mobile tablet.

The ARM-based device running "Windows RT" is the iPad equivalent. That's the "mobile" device. And I just don't see that being very popular. As I say, I hope I'm wrong. I do like Windows Phone a lot, and this should be like a big Windows Phone. It has the potential to be good. Without developer support, though, it will flop.

The Intel one will cost as an ultrabook, and will compete in that segment. I won't say it is not a consumer segment, considering how many MacBooks Air Apple sold...

But here I have something that can be a laptop and a tablet (assuming enough horsepower and a full W8 version) and this for me is a premium.

For sure it won't sell as the iPad, but I wouldn't worry about the number of applications: almost all the new laptops will have W8 when it comes out, Metro apps will be made.

You say you view a Surface as a premium product b/c it has both laptop and tablet. Your logic is sound, but history shows that convertible laptops with touchscreens never sold well beyond a few niches. Perhaps they priced themselves out of the mass market, I don't know.

I still feel that with Apple's lead and iOS's huge app ecosystem, the Intel Surface tablet would need to be cost-competitive with the iPad to sell well with consumers, not just be restricted to enterprises, or worse, enterprise niches (like field service). So $6-700, not $900-1,000.

In my opinion you picked the wrong failure tablet as a reference. The correct reference is the slate Microsoft presented in 2010 and the TouchPad. Both have one in common: HP.

Guess why Microsoft is it now doing by itself?

Will the surface be a success? Don't know, but it won't depend on me as for sure I won't be able to buy one.

I did totally forget about the Courier tablet, my bad!

I think Microsoft is smarter this time by choosing an Asian manufacturing partner. They are really supply chain experts in a way that HP is not, nor Palm, when it tried to introduce that Folio device.

Even smarter - they might be using the same company that makes iPads, Pegatron:

I think by considering table below the product would be a good alternative in the market. 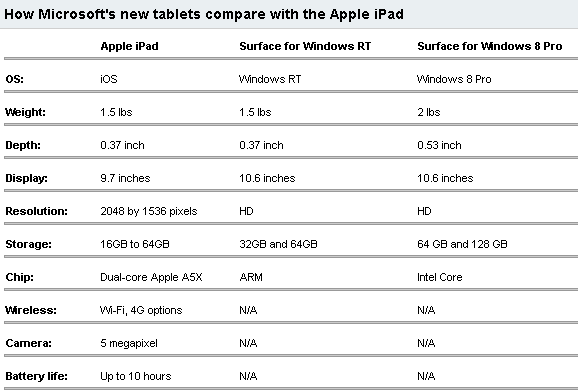 Some of the Surface specs look good, other key numbers are unknown:

Which ARM and Intel chipsets?

# of apps for Surface Windows RT at launch?

And, of course, what price?