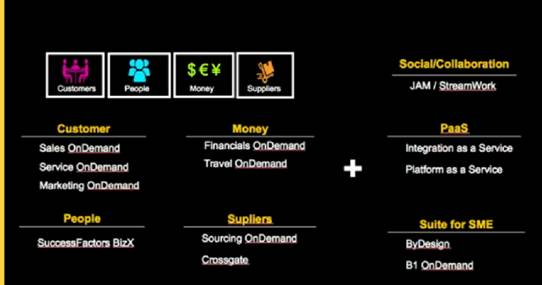 The slide shows the four SaaS applications and the components on which they are based and is another representation of the information we heard during Lars’ keynote at the Sapphire.

I’ve been looking at SAP’s job openings and there are still a variety of openings (here is one example ) for the old LoB applications (Sales OnDemand, Travel OnDemand, etc). I’d assume that if these applications were going to disappear and be integrated into a new “super” application that the jobs might be pulled.

Based on the fact that the applications were available to be test-driven at the Sapphire (at least based on Lars’ statement during the keynote – “ready to go right now” – “it is being demoed right now on the stands”), I’ve always assumed that the new applications exist on their own and would replace existing OnDemand apps.  Based on the continued marketing push of the existing LoB applications, however, I’m no longer sure.  If the new super-applications are the central components of the new Cloud strategy and exist on their own, then I’d expect a ramping down of the old LoB OnDemand applications in terms of marketing / sales activities.

Since the new SaaS applications are probably no where near GA, SAP has a certain dilemma – the LoB applications are currently the only LoB offerings that are available to meet very real business requirements.  I assume that there will be a transition between the two stages where the existing OnDemand applications remain on the market and the new applications are in ramp up.

Open questions for those customers purchasing the existing offerings must be 1) a migration path to the new currently unavailable applications for their existing cloud-based data and 2) possible license / subscription transfers to the new applications when they reach GA.