It would seem foolhardy and stupid to try and guess the final league standings for a sports season four years from now (though the continued embrace of Big Data-based predictive analytics by pro sports teams may change that someday).

Yet, here we have good ol’ IDC stepping up this week with their latest predictions for smartphone operating system market share til 2016.

To be fair, IDC’s (and Gartner’s, and Forrester’s, etc.) forecasts do have more than stats-o-tainment value for those of us who check Techmeme five times daily.

For developers, it helps decide where to invest their time and skills in, and could mean the difference between a healthy income and unemployment several years down the road.

For app makers, it can mean the difference between breaking even and breakaway profits.

And for enterprises, forecasts like this guide CIOs in making their long-range infrastructure and hiring plans.

And just to refresh your memory, here is IDC’s predictions from 15 months ago, for comparison. 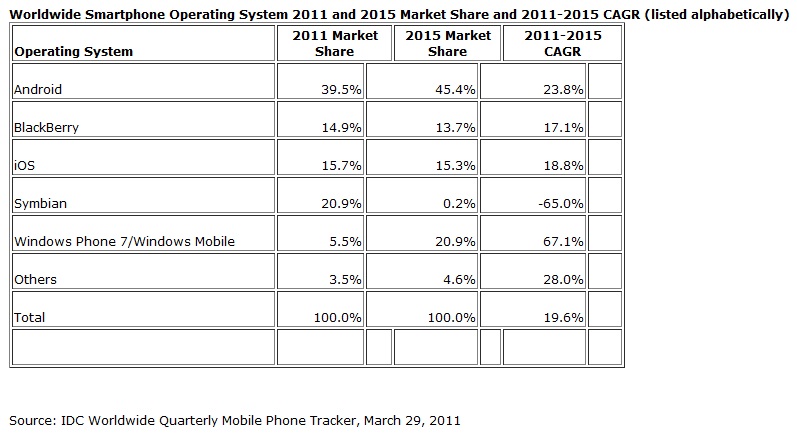 Here are my takeaways with the enterprise in mind:

1) Multiple platforms are here to stay. Companies that are supporting 3-4 platforms today – BlackBerry, iOS, Android, and maybe Windows Mobile if they’re heavy into field service – but wish they weren’t will find no relief, according to IDC’s forecasts. Four years from today, they’ll be supporting Android, iOS, Windows Phone and (probably) BlackBerries.

Enterprises must not only seek out MDM tools that strongly manage all platforms, but also Mobile Application Development Platforms (MADPs) that allow you to write once, run anywhere on the OSes you want to use, with minimum rewrite. Even better would be an overarching platform that synchronizes MDM with MADP to give enterprises maximum control over their mobile infrastructure. Bottom line, you need to adapt as the days of the Windows/BlackBerry duopoly are over.

2) Forget IDC’s wording, Android isn’t “peaking.” According to IDC’s own figures, Android shipments this year will be 1.1 billion phones. That will grow to 1.22 billion Android smartphones in 2016. In other words, Android has neither stalled nor flattened out.

3) Even if Windows Phone has caught up to iOS by 2016, iOS will still be ahead. Even as Windows Phone matches iOS in 2016 shipments, its overall installed base of users will still lag for several smartphone refresh cycles (each of which is about two years). Also, IDC expects most of Windows Phone’s gains to come in emerging markets with Nokia’s help. Nothing wrong with that, except that mobile developers and apps still come from and cater to the developed markets – iOS’s core strength.

4) The big loser in IDC’s revised predictions isn’t iOS (or Symbian), it’s RIM. Whereas IDC once saw RIM still holding 13.7% share of the market by 2015, it now sees it only holding 6% this year, and 5.9% in 2016. “The gulf between the BlackBerry OS and its primary competition will widen over the forecast as the mobile phone market becomes increasingly software/app-oriented and the ‘bring your own device’ enterprise trend proliferates,” says IDC.

5) The forecasts, ultimately, don’t matter to CIOs as much as they would’ve 5-10 years ago. I see a trio of reasons: 1) the short tenure of today’s CIO means many won’t be around when 2016 rolls around; 2) the emergence of BYOD lets organizations avoid having to budget tens of millions of dollars in capital expenditures for mobile hardware; 3) long-range forecasts are less reliable due to the dynamicism of the mobile market. Think of tablets, which have only been around 2.5 years old. Not to be nihilistic, but any forecast today need to be taken with a handful, not a pinch of salt.

If you want to hear more about where enterprise mobility might be in four years, I’d suggest checking out the Breakfast with Gamechangers Internet radio show next Wednesday June 13 at 11 am ET/8 am PT. SAP President and Corporate Officer Sanjay Poonen will be interviewed by host Bonnie D. Graham.

thanks for your blog, interesting to read as always.

I wonder which surprises we will see in 2016 as you are right to point to the sudden emergence of tablets in the last years.

Let's just say it could be something nobody predicted. After all, Gartner as recently as 3 years ago predicted Symbian would still be the volume leader for 2012...