Forget B2B or B2C. Mobile is Making it All About B2P

In last year’s Mobility Manifesto, I called for workers to rise up and demand that their bosses empower them with the mobile devices and apps that would make them more productive and happier at work.

After all, the evidence is clear that we’re moving into a post-PC era. Yet, so many CIOs and IT leaders were in complete denial about that last year.

Things have changed, and the call above has generated a response from the many CIOs and CTOs who are starting to understand the potential of mobile to actually improve the lives of People and make them happier, whether at work or at play, whether in their guise of worker or customer.

Take Bangladesh’s Dutch-Bangla Bank Ltd. Powered by its garment-making industry, Bangaldesh’s standard of living and wages have risen quickly in the past decade.

Still, only 13% of the 160 million citizens have bank accounts because of the lack of branch offices in rural areas where most live.

However, about half of the 87% of Bangladeshis that are “unbanked” do have mobile phones, said Abul Kashem Shirin, Deputy Managing Director at Dutch-Bangla Bank, during a Mobile Innovation & Customer Panel at SAPPHIRE NOW in Orlando last month.

Seeing the opportunity, the bank launched a mobile banking service (that happens to rely on Sybase 365).

“Today, our customers, many of whom lived too far from banks to open accounts, can now conduct all types of banking transactions,” he said. This will allow tens of millions of Bangladeshis to open banks and save money for the very first time.

It’s tangible proof that businesses can do well by doing good, for customers or employees. And it’s not restricted to the developing world.

Most Bangladeshis can’t build savings because they live in villages that lack banks. Mobile banking services are bridging that gap. 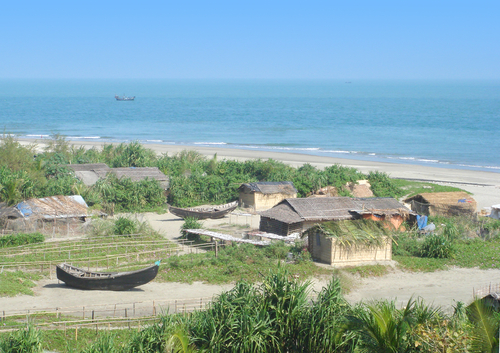 Most Bangladeshis can’t build savings because they live in villages that lack banks. Mobile banking services are bridging that gap.

Take watchmaker, Fossil. It has dramatically cut down on paper printed for internal meetings and reports by storing content on iPad-accessible portals, according to vice-president for IT infrastructure, Mark Reynolds. That is greener, and saves money from lower paper, storage and network costs, as many large reports no longer clog employee e-mail in-boxes. Fossil is building these portals and apps using SUP, and securing corporate-liable and employee BYOD devices using SAP Afaria.

“We’re not just B2B or B2C any longer. We’re business to people, or ‘B2P’,” said SAP President and Corporate Officer, Sanjay Poonen. “It’s about people: More people today access underlying data on a mobile device, it’s a way of life, and these users expect a consumer-grade experience to run their business processes on device – simply put, they want ‘Beautiful Software.'”

Also, “workers want the same experience they have at home in the workplace,” said Keith Moody, CIO of printer maker Lexmark. The company has rolled out a managed BYOD program including a monthly stipend for employees along with a mobile CRM app to empower its salespeople, and a similar status/dashboard app for its repairmen out in the field. And it has a whole slew of productivity apps planned that would apply to its field and office-bound workers alike, said Moody.

Of the many tributes to the late gameshow host Richard Dawson I read recently, the one that piqued my interest the most honed in his role as the villain in the 80s sci-fi flick, The Running Man.

Now, The Running Man is only my 4th-favorite Arnold Schwarzenegger flick from the 80s. Ahead of it, I rate Predator, Terminator, and Total Recall (can’t wait to watch the reboot!) That is testimony to the richness of the Ah-nold back catalog, not disrespect to Running Man, which I remember being enthralled with as a teenager growing up in the frozen suburb of Burnsville, Minnesota (the Running Man dance I can still pull off on a freshly waxed kitchen floor).

Getting back on track, the writer at Gawker says Dawson got to deliver far better – and by better, I mean cheesier – lines and catchphrases than Arnold. He knows because he can still recall all of them to this day. That’s because:

It is important to remember that when VCRs first starting hitting every home in the United States—including those in small Illinois farmtowns like mine—the gimmick was not that you could watch a movie at home, but that you could watch itagain. You could pause it; you could rewind it; you could fast-forward past the boring parts…This meant that certain movies, you watched over and over and over. I vividly remember watching movies with my little sister that, as soon as they were over, we would rewind just to watch again. We didn’t have cell phones or computers or even video games, not yet, to keep us interested. So we’d just watch the movie we just watched again…The Leitch family’s regulars? Superman II. Ferris Bueller’s Day Off. Clue. Adventures in Babysitting. Revenge of the Nerds. But all told, I bet the movie I’ve seen more than any other, one I haven’t seen at least 20 years, is The Running Man.

Of course, thanks to the Internet and tablets, there’s literally too much that you can watch, and you can watch it any time you want.

It’s a shame because lots of valuable stuff can fall through the cracks. Which is why I’m here, to be your guide – your Rabbi – to good stuff, mobile-related.

For instance, if you’re a technologist at an organization large or small and thinking about how to deploy mobile the right way, I’d suggest taking a look at the video replays from the SAPPHIRE NOW conference in Orlando last month.

There are more than 45 demos of cutting-edge enterprise apps, presentations by senior executives, and panels with SAP customers. A back catalog even more extensive than the Governator’s. One of the few things missing is the panel I’ve written about above moderated by Poonen. Still, check them out…

Yay, I'm not the only one that can still remember "The Running Man"!

It was somewere in the early 90's that I've first (and last) seen it. Those were the days that they still had a lot of good movies on TV.

I don't think they broadcasted it ever since (at least not in Belgium), and I can't find it in the local media stores either... 🙁

If they can remake Total Recall with a skinny actor like Colin Farrell, why can't they re-do Running Man? Let's cross our fingers 🙂