Drivers at Work: Building an Effective and Sustainable Super User Network at Fluor

In the summer of 2010, I led a three-webinar campaign for SAP on the subject of end user competency. In the course of this campaign, I made the acquaintance of Julie Stokes who is the ASUG leader for the Documentation and Training special interest group. She was kind enough to agree to being the beta client for a newly-created SAP End User Maturity Assessment. Julie works for Fluor, a global engineering firm with 4500 users in thirty-five countries and the assessment reported to her that her user supports were sound but that her super user network had collapsed.

I heard many similar stories about how super user networks had degraded through time, usually because of three common problems:

1. lack of authority:  super users were often told by supervisors to “get back to your real job”

2. lack of continuity: attrition among super users was not addressed and, through time, the network simply disappeared

3. a general lack of respect (and thus, a general neglect) of the end users as a whole.

Since the fall of 2010, I have been working with Julie to rebuild her super user network and to overcome those impediments as well as to track its progress. In January of 2012, we surveyed over four hundred users and super users from her pilot group and found that the benefits of a properly organized super user network are astounding. Given the extremely low cost of setting up and maintaining such a network, the ROI is almost incalculable. 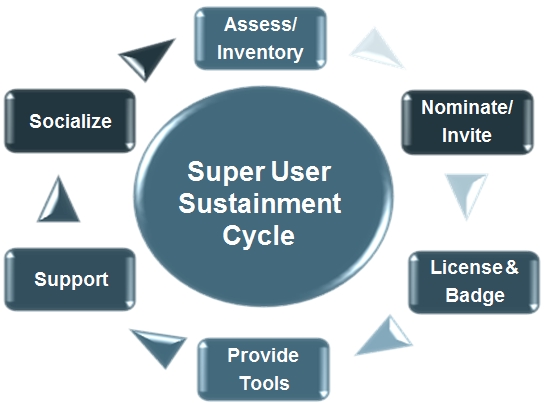 I have posted an 18 page case study at my blog “SAP Searchlight” that provides the details of the assessment, how we re-built the super user network, and the excellence results received.

Wow, what a great material and thorough research! Thank you for sharing.