Open up the Work Bench found under Content Development from MII Main Menu.

Create a new transaction in the Work Bench (Catalog Tab). And create a local variable named value and giving it an initial value of 1. Its value will help us determining the process flow through the transaction.

In our example depicted below, we will be trying to set up a connection between MII and ECC.

Under the Logging Header on left below, one can find – Tracer block. In Configuration Link- one can link any value to its message text tag (as below).

We are linking the local variable which we created above to Tracer Message tag.

We can configure the SAP JCo Start Session giving in details like SAP Server/Client along with Login Credential ie UserId/Password through which it will be able to connect to SAP ECC. 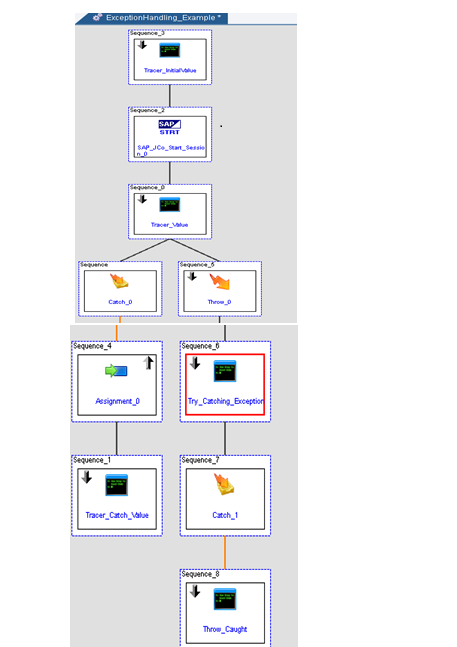 The above two REF Diagram showcase the complete process flow in the transaction.

We tested a positive scenario by setting up a SAP JCo Start Session with correct credentials and correct SAP System details.

On execution- we found:

Tracer_InitialValue and Tracer_Value represent the value 1 and then since no exception is generated via JCo Session, the execution flow doesn’t pass through the Catch_0 action block and hence it doesn’t reach the tracer Tracer_Catch_Value (extreme left below, REF2).

The Throw action block throws an exception which is caught via Sequence 7, Catch_1 and is traced via tracer in subsequent block.

This is how the process flow takes place and catch/throw action block works for a positive test scenario.

We set up an invalid system details in JCo Start Session so that it fails to connect the system.

On execution – we found:

The process flow via Sequence 5 for Throw Action block remains the same as of positive test scenario. Since this portion is set up to generate an exception and later catch it. Only thing to note is: The Catch Action Block- ie Sequence 7 is must, if we are setting up a Throw exception logically in our transactional logic.

This demonstrates the use of Catch / Throw Action Block and its use in case of exception generation.

The above two scenario showcase us the use of catch and throw action block and how we can use them in exception handling within MII transactions. They are very useful for runtime exception handling and I believe should be taken as best practice for MII projects.