The Mobile Value Chain Challenge: How the Mobile Wallet is a Game Changer

Most blogs and articles about mobile wallets and payments focus primarily on the technology, and often omit the challenge of adoption of this technology.

Product marketing 101 is based on Moore’s classic technology adoption curve, which splits customers in to Innovators, Early Adopters, Early Majority, Late Majority and Laggards. And, to put it simply, is focused on the challenge of getting customers from “Innovators” to “Early Adopters” phase. 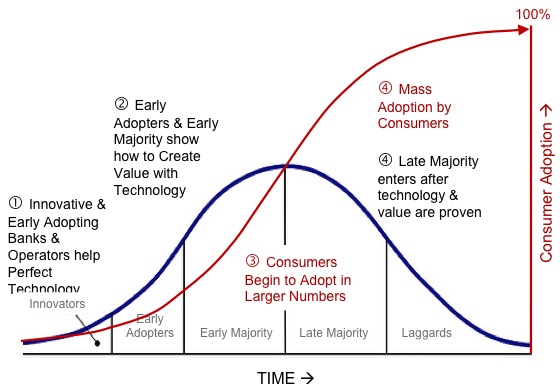 If we look at mobile commerce, we can see that we are very different stages on this adoption curve.

In developed markets, Mobile Banking is very close to crossing from “Early Majority” to “Late Majority” phase, and so could be consider a mainstream service.

When the first mobile banking services launched in the late 90’s, the technology was way ahead of consumers – both their needs and access to the technology. Internet banking was still being established and so banks and consumers were still building confidence in accessing their accounts remotely. More importantly, whilst it was technologically possible to create a WAP banking site, most consumers didn’t have a WAP capable phone, and even those who did, the user experience was very poor.

It was only in the last few years that mobile banking usage has really taken off. Whilst there are a number of reasons for this, one of the most important was how it moved from being a technology led proposition, to a service led one. To take two examples – let’s consider alerts and Apps.

SMS alerts have been hugely popular with consumers – the benefit is clear (get your account balance) and the technology (SMS) is one that is universally available on mobile phones and used by everyone. Once the ‘app stores’ arrived on the major phone platforms, we saw App based mobile banking finally take off. Again, the technology was proven, and the apps have clear benefits to the consumer.

In developed markets mobile payments is at a much earlier stage, whilst there are a few notable exceptions (Japan, South Korea and Austria) most deployments are still at the “Innovators” stage, and just a few have crossed over the chasm in to “Early Adopters”.

The issues are twofold. Firstly, this is still a technology led initiative, with each new service requiring consumers to adopt new technology from NFC stickers, NFC phone cases, NFC enabled memory cards, new SIM cards and even new mobile phones. In each case, the service needs to wait for consumers to catch up with technology, and so struggles to gain momentum.

However, there is another reason, and one that often gets overlooked. Not only does each new system need to bring consumers in, but also it needs to make (financial) sense for all players in the value chain.

If mobile payments is to succeed, the industry must consider the implications of adding a number of additional parties to the current transaction ‘pie’, which is already split between four parties: the merchant, issuer, acquirer and the card scheme. What does it mean for those currently at the table, when the invite to dinner is extended elsewhere? With the addition of the mobile operator, the phone manufacturer, the creator of the mobile wallet and potentially others, the value share becomes increasingly smaller for those involved.

Simply put, the (existing) mobile payments pie isn’t big enough for everyone who wants a seat at the table.

The key players in the market have adopted two different approaches. On the one hand,  providers have adopted the model of only charging the issuing bank to host its cards on the mobile application and plan to make money from the extensive consumer data they will gather through their mobile wallets. On the other hand, providers have opted for a “flat fee” model, charging the card issuers a flat fee per account per year. The difference between these two approaches is stark, and it is too early to establish which is the smartest route to take.

When using a mobile wallet in place of the traditional methods, is there additional value for the customer? New value simply must be created, for the mobile wallet to succeed. This could be in the shape of convenience for the consumer, having all cards in the one electronic place, making anything but their smart phone redundant.

Equally, where is the value for merchants? They will need to deploy new terminals, and more importantly train their staff on this new payment mechanism. A service that creates no new value for the merchant will struggle to gain adoption.

For consumers this can come from convenience, but also related services such as loyalty schemes. For the merchant and the payment scheme, mobile payments will provide a great depth of customer insight and analytics.

Precisely how this will look and work is still up for debate. What each new mobile payment/wallet scheme does, is the next experiment in what will be the winning formula.

Beyond this, to move the mobile wallet landscape forward, the ecosystem must be as open as possible – a closed ecosystem won’t grow large enough to succeed. Just as interoperability was core to the growth of mobile messaging, so it will be for mobile payments.