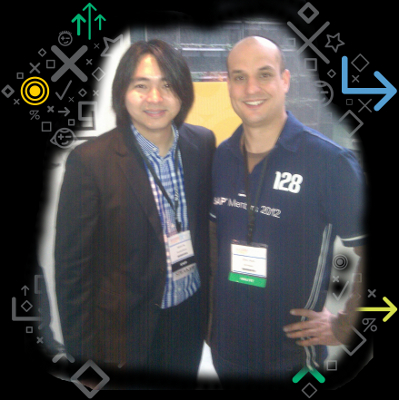 (Note, if you don’t manage to bring Martin Gillet with you to a conference, then at least remember to bring something better than your camera phone with a bit of fluff trapped in the lens cover and you might get some good photos. Apologies to the creative types who made the SuccessFactors background that I’ve shamelessly stolen, I had to do something to make the photo look better.)

Finally managed to grab a few moments to myself, so I’m going to throw down, in what will probably be a bit of a random mess, and certainly in “my style”, some of my thoughts about attending SuccessConnect in Sydney last week.

If the people who make up the SuccessFactors story were well represented by the bunch that took the time to chat with me in Sydney – then they must have one of the higher concentrations of really intelligent, and nice, people I know.  I heard about Lars, and yes we did discuss the cult of personality – but I completely disagree with Paul Hawking (a fellow SAP Mentor – who says we have to agree?) The team of experts who make up this crew are all brilliant in their own right – without the “7 foot Viking”, yes, there would be a gap – but that wouldn’t sink the boat. In every area (I spoke to Charles DeNault about Jam,  Gord Zeilstra about recruitment and Karie Willyerd about modern talent, etc. etc.), there were people passionate about their areas and with a real drive, not only to be top of the game, but to improve and keep on improving.

I was blown away in one session when I was talked through the “and these are the things that you’ve voted for” approach and idea that was presented. OK, perhaps SAP does this (I’m sure that ASUG people will chime in here – but then doesn’t their business model rely on SAP not paying attention to the little guys? – sorry might have been overly cynical there), but never in such an open way have I seen it as at SuccessConnect. People were honest and open about what they hoped to achieve. When I had a question I only needed to ask. Having had the privilege of discussions with high level SAP execs though the SAP Mentor connections , I can honestly compare the two sides. SuccessFactors has the culture that SAP is fostering in the top layers of its organisation (or at least the ones friendly to SAP Mentors) spread throughout the organisation.

3) Awesome people with a vision

On the final day of the conference (there were some training sessions the next day – I’ll have to ask some friends how they went) the “Innovators and Leaders” took to the stage to do a panel discussion. It went really well. Questions were opened to the audience, and me being who I am, I managed to get one in. I asked: “SuccessFactors likes to drink its’ own Champange – what would you, as leaders in your company, like to see SuccessFactors build in the future that would really help you with your jobs.” I got some great answers – the future for cross application integration is bright – or very poor (the idea of single LOB solutions was seen as hampering innovation and communication). Predictive analytics gave the nod to how HANA may enter the forum. “Social” interaction as a way of facilitating business might have become so obvious that it’s dropped off the SAP deck of Cloud, Mobile, and In Memory – but for the SuccessFactors guys it’s right in there in how they think. I really look forward to understanding how they bring the good bits of Streamwork and Jam together.

4) Who cares about the technology?

I know Naomi Bloom @InFullBloomUS, a particularly vocal HCM cloud supporter/analyst/blogger, makes a big deal about the underlying tech of cloud companies. And lots of my techy friends really care about this (I just had a conversation over twitter with Vijay Vijayasankar, where he expressed his concerns about the whole platform not being on the same tech stack, and why users should use Neo

(SAP Netweaver Cloud – and yes we both prefer the old name) if SuccessFactors wasn’t using it themselves ). And if you can hang around an SAP person for more than a day without hearing about HANA, you’ve done well. But really, does it matter? What matters is great user experience, doesn’t it? OK,- if you use HANA as your underlying tooling, then it opens up possibilities for having amazing analytics that can give you powerful tools to build great UX. If all you give your users is an SQL interface, no matter if it can query billions of rows of data in seconds, you’re not going to be sitting with the cool kids at lunch. Around this whole topic I had a great chat with Aaron Au, the co-founder and CTO of SuccessFactors, and, as you can see from the photo (that’s me and Aaron), I managed to grab with my rather poor camera phone (yes, it’s time to upgrade – or at least clean the lens), he does wear a suit. But – get this – he travelled back to the US in economy, just like the rest of the team. (Thank @votegord for that amazing insight!) Over a dinner, I managed to monopolise Aaron’s time (sorry to everyone else sitting around) to ask him for a little bit of deeper info on just how he saw the Successfactors stack integrating with the SAP OnDemand suite. I also asked about how he saw the needs of enterprises used to the flexibility of building bespoke solutions within the SAP platform could be met if they were to use SuccessFactors. I want to write in a little more detail about this particular area as it really matters to me personally – but for now I’d like to summarise the response: As long as components are built in such a way that integration between them is not hindered, then a heterogeneous system stack can give rise to more innovation and powerful solutions. And in the end what matters is a great user experience across all platforms.

5) Which brings me to mobile

Mobile was there, I mean, it was there. Stop, period, the end. The understanding was that you can’t have a modern UX without mobile. And what was even more interesting, they didn’t need a third party device management solution (aka Afaria) to use it. It just worked – and they had experiences of companies with hundreds of thousands of employees using the apps. Strangely enough, most people with a smartphone actually know how to upload an app onto it. After all the sell that SAP has put on the absolute need for device level management (which I haven’t really ever bought), it was nice to see a perfectly good solution that worked and didn’t use it at all.

OK, so I was at a HCM focused conference, and I’ve been to a few of those in the SAP world too and I’ve seen a similar sort of thing, but that was caused by ignorance not choice.

None of the customers at SuccessConnect really seemed to care about the technology. They just wanted it to work, and to work right. And because for most of them SuccessFactors was working, then their projects (and the budgets behind them) weren’t about the tech and getting the tech working, but were about change management and training, and more change management and more training. And guess what – they had wildly successful projects.

This is certain to be the first of very many blogs I’m going to write in the SuccessFactors space. I clearly see this is where I’m going to be headed longer term. I’d like to make my first one a little special by signing this one off with a huge” thank you” to the guys who looked after the poor little guy in a blue top so well over the three days I was there. In particular thanks to Andrea Meyer (the person whose phone number is apparently on every SuccessFactors press release) and Michelle Herman (who has to manage all that) . Friends are people who come and sit on the floor with you.  Thanks for a great conference! 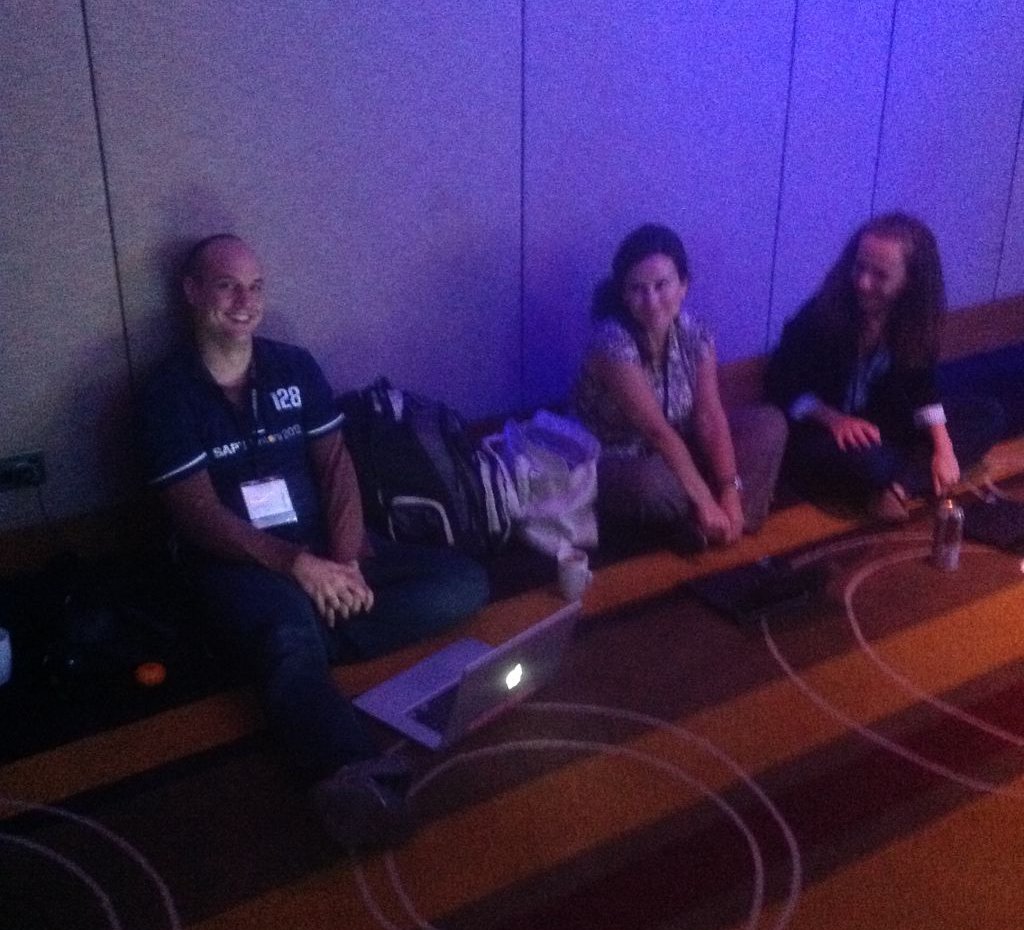