Note: This blog is the first blog in a two-blog series about the recent Sapphire event in Orlando. NetWeaver Cloud evangelist Mathias Steiner tweeted asking about a delivery date, so I wanted to oblige him and get a first blog out.

At the recent Sapphire, SAP’s Cloud Strategy was given a great deal of attention and the keynote by Lars Dalgaard was given special prominence. The most important change was a simplification of SAP’s Cloud offerings with four new SaaS applications acquiring dominant positions:

Previously, there were a variety of OnDemand “solutions” that were available. The new applications combine various aspects of these applications and concentrate on particular use cases that are assumed to better reflect existing customer requirements for Cloud applications.

I was curious as to where SAP’s old Cloud solutions would be end up in this new strategy, so I created a table to be able to track the changes. I based the table on various assets (videos, presentations, blogs, etc) and conversations that I had at the event.  I decided to expand the list of solutions to include all SAP’s OnDemand offerings that I knew about.

Note: Although I’ve created the table based on my understanding of the new offerings, it may include errors – so bear with me.

There are two types of Cloud offerings included in my table that have different relationships with the four new SaaS applications.

Note: There are probably other SAP organizational units which are involved in Cloud activities but they are unknown to me. As an outsider who is not privy to all the internal details of the company, my understanding of SAP organization might not be 100% correct.

Note: The supplier-related cloud activities could be associated with newly acquired Ariba rather than Lars’ Cloud Business Unit.

Upon completion of the transaction, it is planned to consolidate all cloud-related supplier assets of SAP under Ariba.  The existing management team will continue to lead Ariba, which will operate as an independent business under the name “Ariba, an SAP company.” [SOURCE]

The impact of this decision on the ability of the Cloud Business Unit to meet Lars’ sales goals is unknown.  The necessity of consolidating Cloud-related activities in one business unit would be detrimentally affected by such a split and might lead to exactly the organizational inefficiencies that Lars is hoping to decrease by centralizing Cloud activities.

Although bound by common corporate goals, each organizational unit has different goals that are specific to its particular function in SAP. These distinct units also have different types of relationships with each other – these distinctions impact their respective attitude towards the Cloud.

Too often, SAP’s Cloud strategy is viewed as being monolithic and only associated with the new Cloud Business Unit from Lars. This business unit might dominate the strategy in this area but a complete picture can only be provided when you look at how these various organizational units interact.

Note: This section deals with my interpretation of the impact of SAP’s organization on its Cloud Strategy. Since I’m not sure that totally understands the relationships between various organizational units, it should be taken with a grain of salt.

As mentioned above, the NetWeaver Cloud originates from the TIP Core business unit which provides both OnPremise and OnDemand software for which there are various internal customer / stakeholders.

As a PaaS, the NetWeaver Cloud is by nature “promiscuous” and can be used to fulfill a variety of use cases.

Like any software product, the needs of customers influence the evolution / developed feature set. The more important the customer the more emphasis is placed on meeting their respective business requirements. 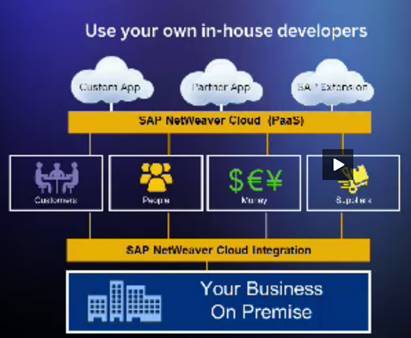 Examining the use cases supported by the platform, I assume that we will see more emphasis on those use cases that originate from Lars’ group.

Furthermore, the initial Go-to-Market (GTM) strategy for the NetWeaver Cloud will also focus on tapping into the existing SAP customer base.

What impact will these two factors have on the evolution of the platform?

Support for other scenarios (BusinessWeb, etc) will proceed as well but with fewer resources and, therefore, at a slower pace. Of course, functionality that meets the requirements of Lars group may also be used for other scenarios but this will not always be the case.

The importance of these SaaS applications in SAP’s overall success makes this strategy understandable. Of equal importance is that the NetWeaver Cloud team must remember that its long-term survival depends on creating a broader developer base than that associated with use cases based primarily on the needs of the Cloud Business Unit.

Shift from midmarket / SME to LE

Previously, the focus of SAP’s Cloud Strategy was on the midmarket and SMEs. Historically speaking, Business ByDesign was the flagship of the cloud offerings. 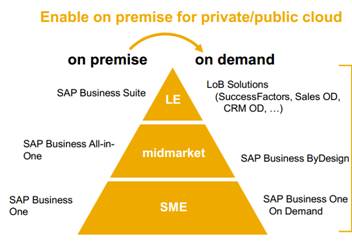 Business ByDesign was also present in the LE market but only as a vehicle to provide support for LE subsidiaries.

The acquisition of SuccessFactors and the central role of Employee Central in SAP’s HR strategy signaled a first shift away from a mid-market and SME-centric focus.  Lar’s keynote at the Sapphire introduced three other major SaaS applications in the LE market and revealed the full extent of this change.

Note: I’m not saying that the midmarket and SME offerings are disappearing – as Lars emphasized, both ByDesign and Business One OnDemand will remain to service their respective markets.

This change in focus represents a more aggressive stance of the new Cloud Business Unit vs the OnPremise / Business Suite organization and allows the new SaaS apps to be a possible choice for LE customers who are presently not SAP customers.  It is this change in attitude which should also allow Lars to achieve his ambitious sales goals.

This shift doesn’t mean the characteristics of SAP’s cloud offerings for all three. markets share the same characteristics. What is interesting is that the SME and midmarket offerings from SAP are suites while the LE offerings are now focused on SaaS applications. In an internal email, Lars described the motivation behind these loosely coupled applications.

Most customers won’t buy a total cloud suite yet, but they will buy multiple products, loosely coupled together, especially in the enterprise. Often we won’t be able to predict how they will buy them, and we often see they buy combinations of products we would not expect. [SOURCE]

What remains unspoken, however, is whether this analysis is restricted to the LE market or whether the same issue exists for the midmarket and SME market. Could this be the reason for the relatively slow uptake of ByDesign?

Despite this shift towards loosely connected apps, SAP still seems reluctant to forgo the idea of the Suite. As Sven Denecken described in a recent slide set of SAP’s Cloud Strategy:  “When used together, these solutions offer the value proposition of a suite”.

Application focus:  Where are those consumer applications?

During Hasso Plattner’s keynote at the Sapphire, there was one slide that I found especially interesting – it showed a pyramid that showed the “best opportunities for applications”. 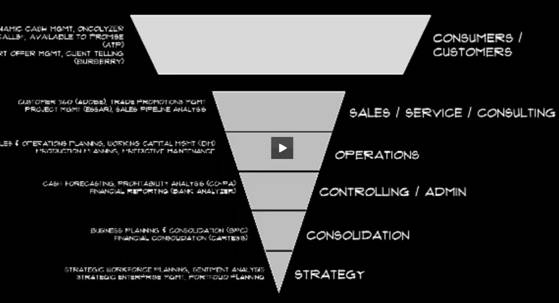 Although the keynote was focused on HANA-related use cases, the fact that consumers / customers are the most important market for such applications was a revelation.  The use cases related to internal / employee-related use cases are described as having less potential.

Since Hasso didn’t restrict his comments to OnPremise applications. I tried to figure out how this statement related to SAP’s Cloud Strategy

The role of SAP’s new Cloud Business Unit plays in such consumer-focused use cases appears to be non-existent. If you look at the material provided by Lars and his group, the focus is primarily on business / internal users rather than on consumers.

I remember one application that was released by SAP early this year called RecallsPlus that is a perfect representation of a new type of application that exploits HANA and is focused directly towards consumers.   The application is based on the HANA AppCloud.  Recalls Plus is supposedly the first in a series of consumer-oriented mobile apps (many of which originate in SAP’s AppHaus).

The SAP AppHaus is focused on developing applications that connect businesses with customers, filling unmet needs, and delivering a great user experience. In delivering apps to consumers, the SAP AppHaus serves SAP’s customers’ customers. According to Xiaquon Clever, SVP of HANA Applications, the aim is to give value to these customers’ customers and thereby generate indirect value for SAP’s customers. The vision is to eventually create applications that connect businesses and consumers more directly while giving value to both groups. [SOURCE]

I assume that these new applications will also be based on the HANA AppCloud.

Here is a quick depiction of this distinction.

My colleagues from the SAP NetWeaver Cloud team will obviously say that this platform could also be used for this purpose. However, if you look at the slides from Lars’ keynote, you will see that the focus of this platform will be to extend the functionality of the four SaaS applications rather than look at other use cases. This restriction could be seen as another example of Lars’ SaaS Chastity belt.

My next blog in this series should include the following topics:

Before I even finish reading this I'm going to tell you the ByDesign row is totally incorrect. ByDesign has HCM, Financial, SCM, CRM, etc, etc, and can easily be integrated with 3rd party vendors.

When will it finally be understood that Travel and Sales OnDemand are just minor slices of ByDesign?

My intention wasn't to describe that ByDesign can't be integrated into 3rd Party Apps but to focus on the four new SaaS applications that Lars announced at the Sapphire.

Sincere thanks for writing this excellent blog post! My reply got a little bit longer, hence I opted for writing a blog post on my own in reply to yours: SAP NetWeaver Cloud (Neo) - The road forward