There is nothing like face to face interaction. Those engagements enable lively discussions that can lead to very creative ideas and conclusions. Happily I had the chance to attend INFO 2012, a convention which allowed exactly that.

INFO 2012 was held in the Tel Aviv Hilton hotel and was about content/knowledge management and social media. Here I wish to share with you some of my insights and experiences.

There were multiple tracks and I mainly attended the social media track. The first session was led by the Israeli Minister, Michael Eytan. He is responsible for the Israeli government relations with the citizens and works on improving them. According to Eytan democracy is a relationship between the civilians and the government, where the civilian is the dominant figure. The internet enabled a new channel of communication between the government and its citizens. As a part of the adaptation to this process, Michael Eytan introduced a web site that will host all the information that a citizen needs in one place (one stop shop). This site includes discussions forums and also a cool feature where you can like and un-like government legislations and actions. 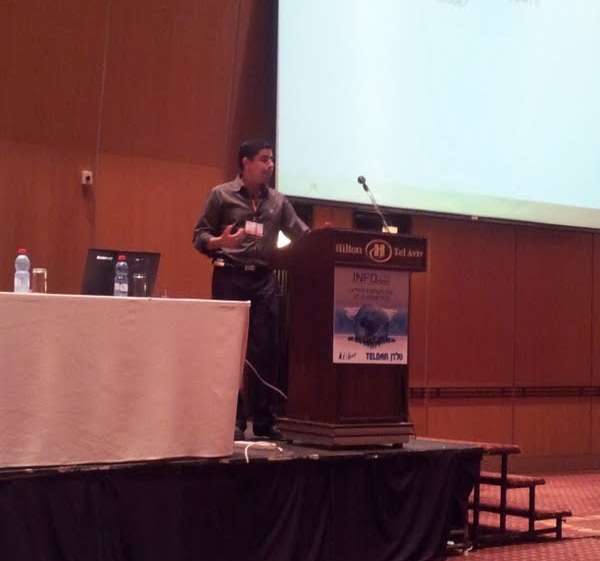 The next lecture I attended was about about the “so called hacking threat” in Israel. Recently experienced couple of massive attacks. It talked about the “taking over site” technique and stealing credit card information. It was interesting to discover that what we’ve experienced in Israel were not very sophisticated attacks. The speaker said that the main damage was caused by the buzz in the social media networks and the panic that followed.

As I was mainly interested in social communities related content, I really enjoyed the lecture by Tami Nutel that talked about managing communities in Facebook and in twitter. According to Tami a successful community has the following characteristics:

When I saw this list I was smiling to myself as I noticed they all exist in SCN.

Then a group of researchers from the Ben Gurion University introduced the facebook application they developed that used collaborative filtering to recommend clips in a Youtube like site. Collaborative filtering is a special technique that investigates the internet behavior of your social media friends to recommend content, products and other activities to you. They recommended clips to 70 people using the database of 7700 of their friends. The advantage of this method is that the recommendations are provided to you without any need of filling forms or others dreadful questionnaires.

What I found must fascinating was the Augmented Reality topic. One of the solutions that were presented was a touristic implementation. It showed how a person could hover his mobile phone around the street he was standing and see how the place looked like hundreds years ago and listen to holograms of guides telling stories about the location. He could also see recommendations and remarks by other visitors.

What I’ve shared with you in this blog was only the tip of the iceberg of all the creative ideas and way of thinking that were introduced in the convention. Hopefully we would be able to implement some of them on SCN. Maybe one day we will have an Augmented SCN:).

Great to see and hear more "local" experiences worldwide.  Thanks for sharing.

Love the reference to augmented reality.  My daughter is studying with a professor in the New Jersey Institute of Technology who really opened my eyes to the innovation possibilities and applications of AR.

Andrzej Zarzycki does brilliant work with students and shared the following examples of his work and research.

Enjoy the read as I have enjoyed your post!