Link to first blog in series.

The goal is to encourage entrepreunership in the upcoming generation by encouraging them, sharing basic business skills (business buddy system) and sharing experience (“Education, is learning through other people’s mistakes”). You might want to read the first post about the goals of the project and the setup.  What has changed since then is the phase of the project. The book that the students were producing has been published (figure 1) and they are now in the selling phase. 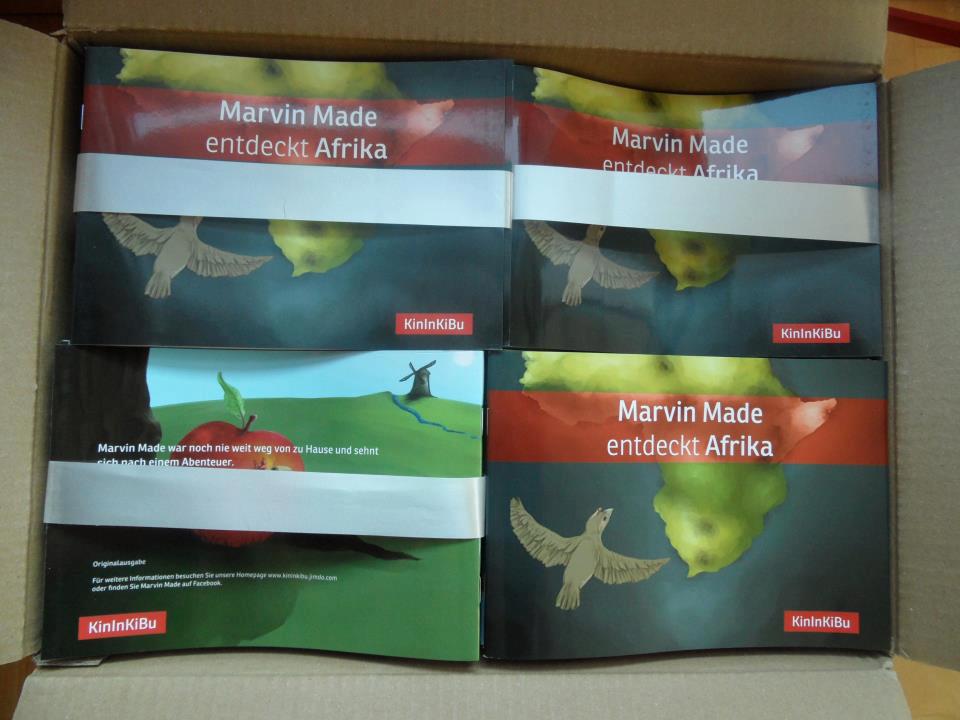 So, the set up has worked reasonably enough. Bear in mind, that many projects never even reach this selling stage. The tools used are the same as at the outset, but there is now a clearer distinction between the Google spreadsheets and the Facebook discussions.

Note: This is a personal project but the learnings should be useful to the SCN community.

One huge handicap for the project, is that one key student was not on Facebook – as a matter of principle. This is probably typical of any project using one commercial social-media tool. There is no feed-sharing between the different social-media companies, so right there you have one hurdle that is difficult to overcome. This is different with Google docs (Google Drive), because access could be gained anonymously and Google had the reputation among the students of being “neutral” . It is also different from e-mail where you have a choice of vendors or commercial productivity tools where the use of the data is less murky (pay your money – use the tool). But communication was transparent and this meant that it was impossible for the students to ignore uncomfortable posts (e.g. “when are you finally going to…:”.)

The frequency of communication was higher than I’m used to with e-mail; shorter;  to the point;  and surprisingly less meandering then e-mail threads. The “like” was heavily and effectively used. That said, there were threads that were not completed, but my impression was that this was less than with e-mail. Despite my encouragement, students found it difficult to respond to e-mail in a timely manner, if at all. But Facebook posts always generated a response.

Incidentally, installing any type of software on the pc/laptop was beyond the patience or belief of all students. When I refer to e-mail, this means cloud-based e-mail clients. Software installations, like the starter crank for car – are something that the students find curious, a sign of bygone days, but not to be considered seriously.

It is also worth mentioning that I discovered that they formed their own private Facebook work groups in addition to the project group. So contradictory to their saying that the tool was not effective, they did perceive strong value in it.

The book itself was crafted in specialist desktop software, but was out of sight of everyone but the artist and author – and there were incidents when the work was “lost and had to be manually recovered somehow”.  Interestingly, there was no effort made to share this work or use a communal tool. This does make sense to me (the artist chooses and relies on one tool without compromises and without any demand for collaboration) but it was a handicap for the rest of the team because once finished changes were difficult and risked seriously delaying the project.

The tracking in online spreadsheets worked extremely well. With my workflow background I lobbied for status management and the students appreciated being able to see at a glance what was open and what was finished (particularly the latter). In fact later in the project they made use of this technique without even consulting me so the usage was effective. 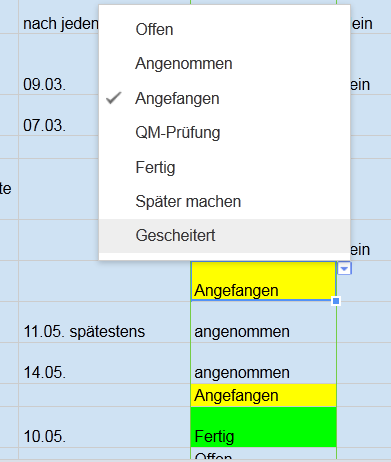 A word about backups… I suspect this went wrong on the desktop software because the students are accustomed to the versioning offered by cloud tools and despite being very computer savvy, the students are simply not used to work disappearing through technical malfunction or forgetfulness. They rely heavily on search, link-collections and their colleagues (aka socializing) to find their data.

The achilles heel of productivity tools: Operations versus Strategy

You should now have an idea of how effective these simple tools can be. And they did take the project forward to meet each critical milestone (delayed or not). But the problem lay in seeing the wood for the trees. Even using priorities in spreadsheets, it was very difficult for the students to distinguish between strategically important tasks and tasks that could be ignored. It was impossible to see a strategy unfolding. It was impossible to invent a strategy and keep the team on that path. Attempts were made to achieve this (ironically paper-based, such as a wall calendar) but these were not successful. For example it was impossible to relate the insight from market-survey tasks to actions in production. It was impossible to distinguish between a discussion that would influence the outcome of the project to a discussion that would have no visible effect at all. All were protocolled or commented to the same extent. So strategic discussions often scrolled out of view of the Facebook radar or strategically important tasks simply waited in a spreadsheet while other trivial and unimportant tasks were completed to the satisfaction of everyone.

Similarly, the linking of tasks to strategic decisions was not possible. So when a decision was made, the associated tasks were completed by the students despite being obsolete.

Would I use SAP StreamWork next time round?

Yes. It is definitely worth a try in order to address the strategic aspects of the project. Being able to create an item in the project activity and discuss it until consensus is reached is very useful. Being able to control what appears at the top of the list rather than simply reflecting activity is vital. Being able to create SWOT diagrams and other types of artefacts would have been useful. These usually ended up on whiteboards or flipcharts and at best were stored at someone’s home or in a locked up classroom. In other words inaccessible. In fact, from what I’ve seen the collaborative flow-modeling tool in use by non-BPM/workflow-savvy colleagues I’d even give that a try, too. And I’m optimistic that the dynamicness drives progress and the omnipresence of the cloud-based access would make the flows useful on a continuous basis and stay up to date. This is particularly true of students, being forced to work at home and in the classroom.

I mentioned single sign-on in the first blog. This is still an issue. But the lack of a single display of RSS feeds irrespective of the tool is a bigger issue. Interestingly, e-mail notifications are the lowest common denominator here, but the fact that email is used for other purposes as well would get in the way. Maybe there is a tool like Seesmic covering StreamWork, Facebook and Google Docs feeds. I haven’t researched this and maybe one reader has researched this and could give us advice.

How about e-mail for communication next time round.

Out of the question for the next generation – and I’m beginning to understand why.

I’m keen to hear from anyone else supporting similar Junior Projects. There’s one more post to come (July/August) with the final observations.

Next blog in series.

Software installations, like the starter cranks for car - are something that the students find curious, a sign of bygone days, but not to be considered seriously.

I suddenly feel very old, thanks for that Alan. 😥

Somehow, though, I'm not surprised with some of the learnings. As someone who studied the application of physics in biology, my understanding of entropy is that a system requires energy to stop things falling apart. This can be both energy that does something, but also potential energy that creates a wall against change.

With social media, the "potential energy" in the form of system strictures is absent, so things will tend to drift. Some extra input is required, either by designing and enforcing adherence to protocols, or by the energy of your efforts to move things in a certain direction.

I'm a sucker for a good dollop of entropy 🙂

I've no idea whether the fish congregating around a reef have any idea of applied physics, but I see that analogy as relevant. What was missing with Facebook alone was something to congregate around. StreamWork items give you something to settle on and focus the conversations. That's why I think it should work in practice for students (but probably not fish).

Having said that, even though I was anticipating a disaster (but optimistically looking the other way) they did get the book out in time (a little overdue) and so it did work in the "office" environment, even if the "office" was the classroom and home.

Similarly, I find that StreamWork does work very well in the standard professional office environment so I guess I could distinguish between business media and social media. But the point I'm trying to make is that the distinction has always been blurred (think  executive golfing)

Bottom line, which the fish will agree on too -  it's all about feeds.