Often times SAP NetWeaver PI releases and Enhancement packages come so fast that while some organizations are still sitting in a particular release or enhancement package or exploring its features for their business requirements, the next version is available in the market already. This is also true for developers as well, who might not be able to explore all the features of a particular SAP PI release or enhancement package before moving to the next. Nevertheless, there isn’t much to worry about, because the features in the old versions are not lost but only enhanced. So, you can still explore the functionalities in the earlier versions while still leveraging it on the knowledge of the latest versions. To support your decision making in deploying SAP NetWeaver infrastructure in order to achieve your integration scenarios, this blog gives developers, consultants and organizations a good insight into features of PI 7.1 (EHP1) and PI 7.3 (EHP1).

SAP PI – Process Integration offers the capabilities of mediated communication on the SAP NetWeaver platform serving as the integrated broker or the middleware. In this type of communication, a central instance that serves as the communication hub connects different applications in A2A (Application to Application) scenarios or different businesses in B2B (Business to Business) scenarios. The focus of this blog is on Process Integration 7.1 (EHP1) and 7.3 (EHP1) Process Orchestration. Process Orchestration describes choreography of data exchange, coordination and management of services, middleware, and applications within an automated set-up. SAP PI 7.31 offers process orchestration by combining the functional capabilities, the power, flexibility, strength and agility of three similar technologies; SAP NetWeaver Business Process Management (SAP NetWeaver BPM), SAP NetWeaver Business Rules Management (SAP NetWeaver BRM), and SAP NetWeaver Process Integration (SAP NetWeaver PI) in a way that allows organizations achieve different business process integration and orchestration scenarios. In the following sections, an overview of the migration journey from dual stack to single stack, the similarities and differences between PI 7.1 (EHP1) and PI 7.3 (EHP1) are presented.

From Dual Stack to Single Stack

The message processing capabilities of SAP PI started off with the use of dual stack functionalities of the ABAP and Java installations. An attempt towards single stack (Java only) integration was first made with the NetWeaver release of 7.1. This was in an attempt to reduce the hardware resources needed, the internal communication as well as the DB access points and increase message processing performance by by-passing the integration engine on the ABAP stack to aid local message processing on the adapter engine. These new capabilities could only support specific scenarios that do not need any capabilities that purely reside on the ABAP stack such as certain adapters (i.e. IDOc- and HTTP-adapter) and ccBPM. This changed the name of the Adapter Engine in the earlier releases to Advanced Adapter Engine (AAE), and now to Advanced Adapter Engine Extended (AEX). With the introduction of the AEX, almost all the capabilities that could not be supported initially when the single stack initiative began are now supported or have been enhanced. This has also paved the way towards process orchestration, in which the single stack of PI NetWeaver AEX can be co-installed with BPM/BRM. This invariably supports all the features of dual stack installation in a more flexible and agile way. Nevertheless, SAP affirmed that further releases of PI NetWeaver will continue to support the dual stack until 2020 when there will be an extended maintenance of NetWeaver 7.3.

i) Repository Objects and Additional Features: In terms of the earlier enhanced features and naming of repository objects in previous releases from 7.1 to PI 7.31, there are      no differences. All the objects still maintain their names; Enterprise Service Repository (ESR), Service Interface (SI). Service Registry (SR) to support publishing,      classifying, discovering services. Service Interfaces (SI) has the capabilities to hold several operations where each operation describes one communications (Synchronous,      Asynchronous). Service interfaces have the following  attributes; 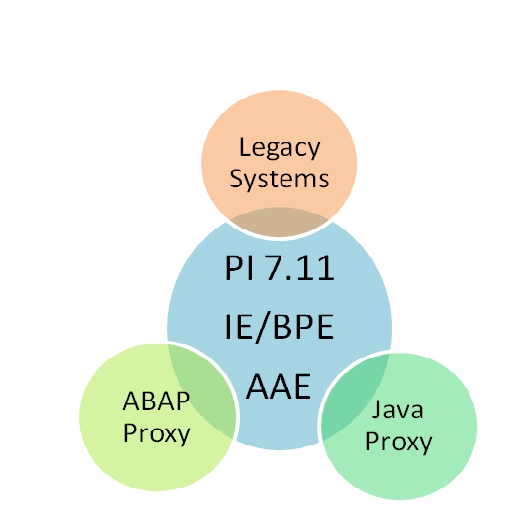 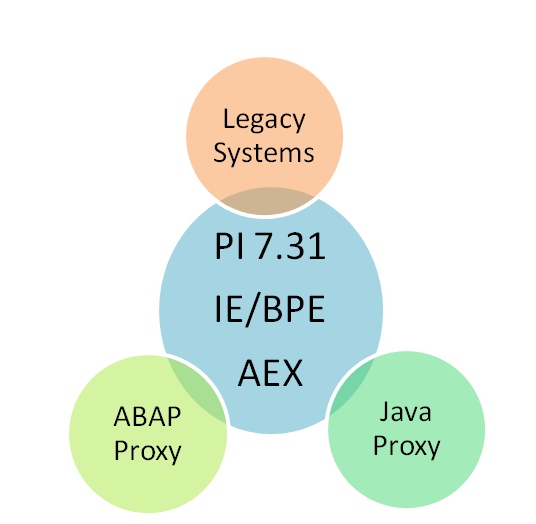 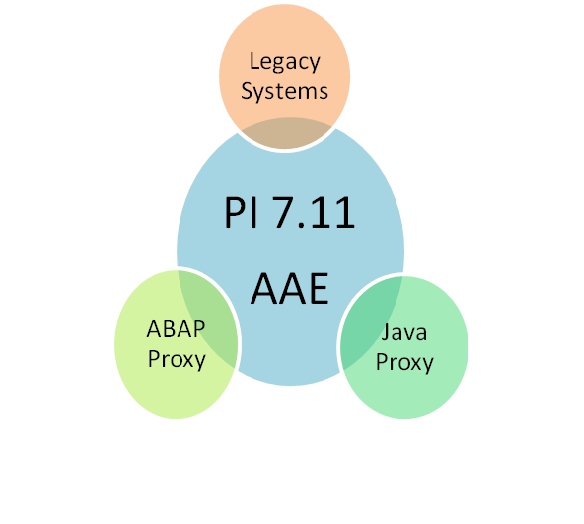 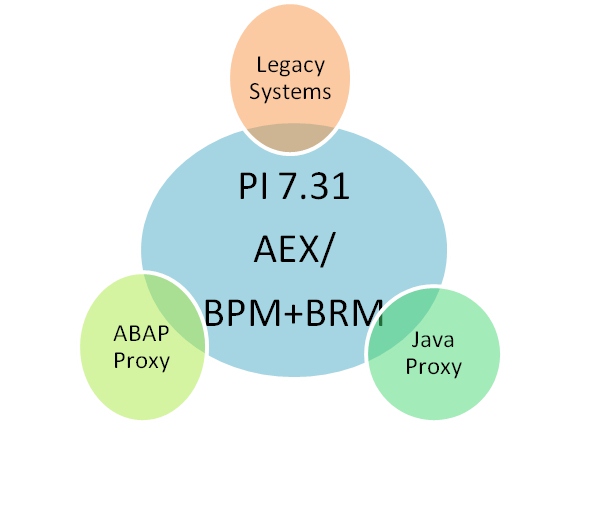 Since the concept of SOA-is important than ever before, scalability and interoperability in centralizing services have become more important as well. In PI 7.31, there exists the possibility of using a single ES Repository for multiple PI domains. It leverages the power of re-usability, central control, access and governance design objects across multiple PI domains. These capabilities provide the platform for flexibility and scalability in landscape setup. Additionally, this means that the ESR from any PI domain can be used for other PI domains irrespective of the installation step, whether it is single stack or dual or whether it is central adapter engine or non-central adapter engine. Nevertheless, not all the ESR in the other PI domains will be used simultaneously, the local ones will have to be disabled within the SLD group model to prevent conflicts. Also, Central SLD configuration is required; and this can be done via CTC template and also manually

a) Integration with FTP Proxy Server via File / FTP Adapter:

b) Availability of Java IDoc Adapter for Single Stack:

With the insights highlighted in this blog, PI 7.3 (EHP1) establishes a new platform for realizing process orchestration. Virtually all types of Scenarios are possible on the single stack adapter engine of PI 7.3(EHP1) in combination with BPM/BRM. The open standards upon which BPM/BRM are designed clearly marks the beginning of a new era in business process orchestration. More importantly, the following capabilities make upgrading to PI 7.3(EHP1) highly recommendable for business process integration and orchestration scenarios using the SAP NetWeaver PI technology; Reduced overhead cost in message processing, Message processing performance is increase by a factor of 4,Single stack installation reduces requirements for hardware resources by half, Total Cost of Ownership (TCO) is reduced coupled with ease of maintenance, Energy consumption requirement for powering the set-up is reduced to less than half of what is needed for a dual stack installation. So, when next you are upgrading, consider these capabilities for a good return on investment (ROI).

Thnaks for the blog and it will be helpful.

could you please clarify that 7.31(Ehp1) supports ABAP Proxy? as per the figure2 shown above.

Thanks for your comment, 7.31(Ehp1) supports ABAP Proxy from an SAP Back-end because the AAE/AEX local message processing capabilities now supports the XI 3.0 message protocol via the SOAP Adapter.

Your blog is good nice and very helpful.

Thanks for the sharing.

Thanks for the detailed and very informative blog. This helped me a lot with my ongoing planning for PI upgrade.

One quick question though, we are currently planning for our PI system upgrade which is on SAP PI 7.0. What would you recommendation PI 7.3 or PI 7.31?