On Sunday, ASUG had several pre-conference sessions.  I attended SAP Mentor Ingo Hilgefort‘s BI4 Feature Pack 3 Tools in a Day hands-on session.  This session was sold-out, which is even more amazing given it was Mother’s Day here in the U.S.  By far this was the best pre-conference session I have ever attended as everything went smoothly.  At the end of the day, attendees gave Ingo a huge applause; one attendee told me that the high quality of Ingo’s materials was worth the price of attending.

I want to thank Ingo for doing all of this; his plane the day before was delayed and he did not get to the hotel until 3:30 a.m. Sunday morning (the day of the session).  Next I want to thank SAP’s Tamotsu Nagata for assisting Ingo; if there was a question, he was there.  Tamotsu flew in from Japan.  Mike Seblani, SAP, was on hand as well to answer detailed questions about Crystal Reports.

Who designs Crystal Reports?  The answer was usually IT does this.  Discussion ensued around the types of reports for Crystal – highly formatted, financial and balance sheet statements that are static. 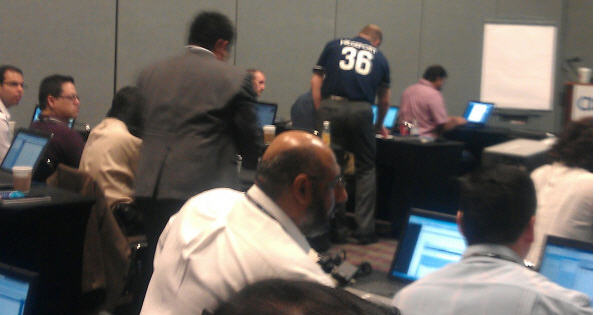 Attendees working on their Crystal exercises.

A discussion also took place surrounding the ability to use multi-source universes in BI4; the key is to link the data in the right way.  Ingo also explained that the universe talks to BW in a relational way so you won’t have the calculated key figures, etc.  Ingo also talked about the new BI4 FP3 features such as waterfall charts and being able to assign your own colors.

With BI4 FP3, Web Intelligence can talk to ECC via the universe. BEx query conditions are supported in Web Intelligence which means it gets all the data from the BEx query.  Ingo also talked about the query stripping option to help performance.  Part of the hands-on Web Intelligence exercises was to track changes using a time-dependent hierarchy. 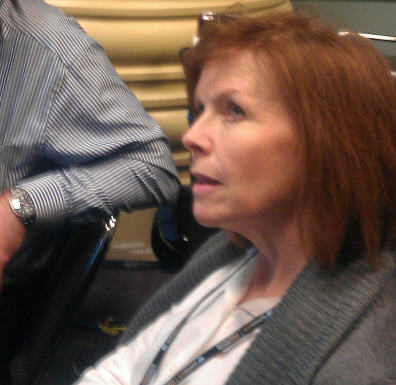 In BI4, Dashboards can now be audited.  BI4 removed the need for a spreadsheet by having a connection to the semantic layer.

Ingo recommended that everyone take a step back before building a dashboard and check out the Stephen Few books.  Ingo said for those BW BEx Web Application Designer customers who have not moved to BI4 Dashboards should consider SAP Zen, which is an eclipse-based environment for building dashboards (planned beta is June).  Go to http://service.sap.com/roadmap (SMP logon required) to see SAP Roadmaps.

Who builds dashboards?  Mostly IT does this but in some places the business does this as well. 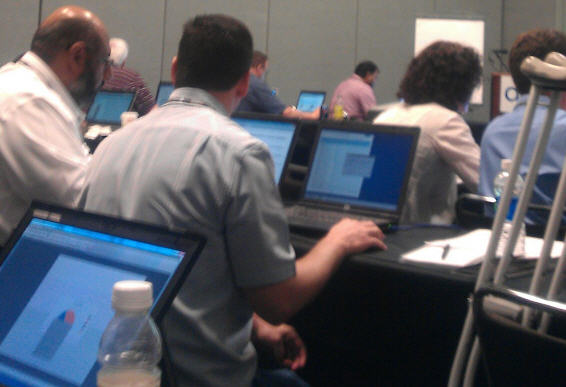 Analysis Office is the counterpart to BEx Analyzer.  Ingo explained it is a huge step forward in terms of usability.  If you know how to do Excel pivot tables, you can use this tool.  Analysis Office will work against BEx 3.5 or 7.0 queries.  Discussion occurred of how long BEx will stay – BEx query is not going away, and BEx Analyzer was shipped with BW 730.  In response to a question Ingo said you can have multiple queries against a BEx workbook.  You can start a lean deployment of Analysis Office without the BI platform.

On one of Ingo’s slides he had a translation of BEx elements to Analysis Office: 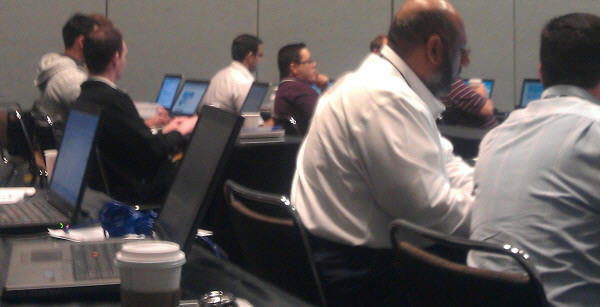 Picture of attendees doing their Analysis Office exercises.  Since the tool is easy to use, attendees had very few questions.

Analysis OLAP (sometimes called Analysis Web) is the successor to Voyager.  It has a conditional formatting preview feature and an auto update feature (works like pause refresh in Analysis Office).  The focused analysis feature is new in Feature Pack 3.  It also has a nice export to PDF feature which you can use to print the report.

If you didn’t get a chance to attend, consider attending BI2012 in Europe where Ingo will do some hands-on sessions.  Ingo is also doing hands-on sessions at Mastering SAP BI in Australia in August.